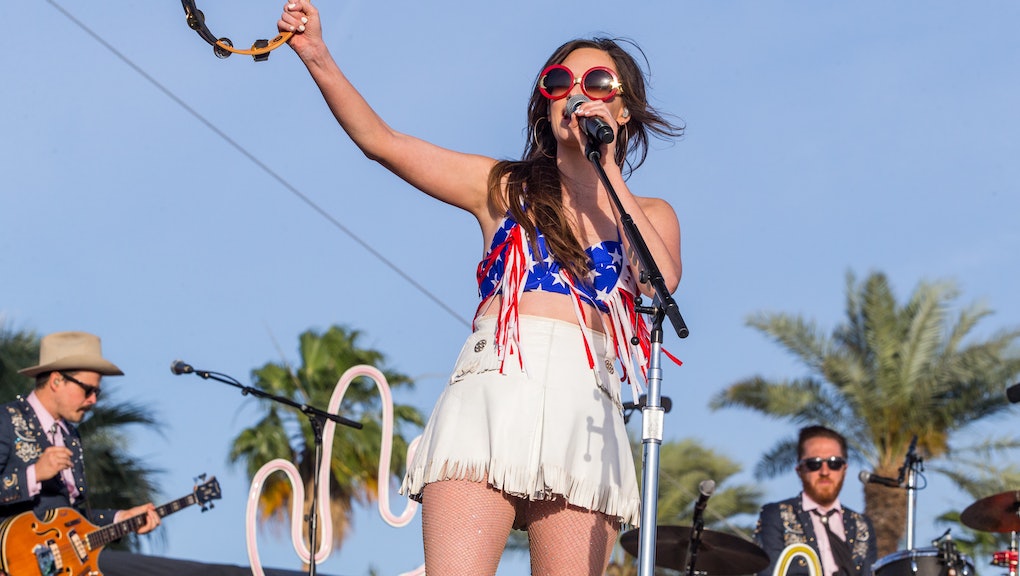 11 Musicians Who Prove Country Music Is for Liberals Too

Two years ago this summer, Florida Georgia Line emerged with their debut single, "Cruise," and with it, bro country. It was the latest manifestation of the long-running and stereotypical social conservatism of country music: traditional gender roles, lunkhead masculinity and fine asses in jorts. Before that, country music conservatism was revived after the Sept. 11, 2001, terrorist attacks: Toby Keith put boots up peoples' asses, the Dixie Chicks were run out of Nashville and the Star-Spangled Banner played every day on country radio.

But amid all the conservative trends in country music, liberalism has its place. That's never been more true than now, when musicians advocate more strongly than ever for gay rights and legal weed, among other causes. Though it may seem like country music was born red, consider Johnny Cash's liberal politics of empathy — and consider the many modern country musicians who speak for liberals still. Here are 11 liberal-minded country musicians, past and present, who prove that country music isn't just for conservatives:

"I don't want to be the McDonald's of music," Musgraves told the Guardian while promoting her 2013 album, Same Trailer Different Park. That sentiment sums up the controversial country star well — she doesn't sing about trucks and cut-offs like so many of her contemporaries. Instead, she sings about weed and gay love and casual hook-ups.

"I know a lot of people don't really agree with those things, especially in the South," Musgraves told the Boot. "But there's actually a lot less criticism towards that song than I imagined... I would hope that they would agree that no matter what, we all should be able to love who we want to love and live how we want to live."

"It's innate in me to be a blue-dog Democrat," McGraw told People magazine in 2008. "I'm not saying I'm right or wrong, but that's what I am. My wife [country musician Faith Hill] and I and our family will do everything we can to support Obama. I like his ideas, I like his energy and I like the statement he would make for our country to the world."

He got a lot of backlash from the country world for that interview, but he remains an adamant supporter of liberal politics. He's an advocate for Sandy Hook Promise, an anti-gun violence program; unfortunately, he has had to defend his involvement in the group. Of his decision to headline a concert for Sandy Hook, he told the Washington Post, "The concert is meant to do something good for a community that is recovering."

"Miniskirts, hot pants / And a few little fancy frills / Yeah, I'm makin' up for all those years / Since I've got the pill," Lynn sings in her song "The Pill." In 1972, she released one of the most controversial songs of the time — country or otherwise — with that pro-women anthem. The song was so successful that, in an interview with Playgirl, the singer revealed that rural physicians said the song was more influential than any literature they distributed.

In a 1975 People magazine interview titled "Loretta Lynn's 'Pill' Is Hard for Some Fans to Swallow," she said, "If I'd had the pill back when I was havin' babies, I'd have taken 'em like popcorn. The pill is good for people. I wouldn't trade my kids for anyone's. But I wouldn't necessarily have had six, and I sure would have spaced 'em better."

No list of liberal country musicians would be complete without Nelson, the patron saint of stoners. "Contradiction exists in everyone," he told Esquire in April. "There's really nothing wrong with the fact that the same people who sing 'Whiskey River' at the show tonight also sing 'Amazing Grace.' When I was back teaching Sunday school, I used to teach the same people on Sunday mornings that I sang to on Saturday nights. Nothing wrong with that either."

"People think country audiences are all conservative, redneck, almost small-minded," Clark told the Guardian. "That's not true. Are they more socially liberal now? Yes. But maybe they always have been, to some extent." As one of the few lesbian country stars today, Clark is leading the way for country music's socially liberal bent.

There's solid proof of her influence: At the 2014 Grammys, Clark was nominated for best country album and best new artist. She wrote Musgraves' gay-rights anthem "Follow Your Arrow," and her song "Stripes" is a hell-yeah female empowerment ballad: "There's no crime of passion worth a crime of fashion / The only thing savin' your life / Is that I don't look good in orange and I hate stripes."

Rimes has long been an advocate for gay rights, and lent her voice to the It Gets Better video movement. "I believe in equality," she told PrideSource. "Everybody should be treated exactly the same way no matter what their race, no matter what their sexuality. I've learned from everything I've gone through and from being in this business for so long and being judged since I was 13. That was my biggest lesson in life: not to judge others. You've never walked in their shoes, you don't know where they're coming from and you don't know their story."

"When we're free to love anyone we choose / When this world's big enough for all different views / When we all can worship from our own kind of pew / Then we shall be free," Brooks sings in his landmark liberal country anthem "We Shall Be Free." Brooks is a longtime Democrat, and sang at President Barack Obama's 2009 inauguration.

"He is in a unique position to do some lecturing — to take a leading voice in the genre's current debates about race, gender and cultural authenticity," the New Yorker wrote in November of Brooks and his return to country music. "Country music's liberal conscience has returned to the stage."

It was more than 12 years ago that the Dixie Chicks made a statement during a London concert that put country music into a hate-fueled frenzy. "Just so you know, we're on the good side with y'all," singer Natalie Maines told the audience. "We do not want this war, this violence, and we're ashamed that the president of the United States is from Texas." They received death threats and their music was banned from radio stations across the country. Sadly, the trio never fully rebounded from the incident.

Granted, Crow has made some missteps in the world of liberal politics, like the time she advocated each person use one square of toilet paper per bathroom visit in an effort to curb global warming. But she's also said some smart things. "My main concern is that [the tea party is] really fear-based," she said, according to News Busters. "What's coming out of the tea party most often, especially if you go onto YouTube, and you see some of the interviews with these people who really don't even know what the issues are, they're just swept up in the fear of it and the anger of it."

"It takes a pretty liberal fan to enjoy an entire Steve Earle concert," the Dallas Morning News wrote in a 2013 show review. The Grammy-winning country rocker has long been an outspoken liberal, ever since he first appeared on the country scene in the mid-'80s. In particular, his 2002 album Jerusalem took on some of the most divisive topics surrounding the Sept. 11 terrorist attacks.

"I think music can change the world, and I think that because of my age," Earle told the Nation. "I'm a post-Bob Dylan songwriter in general, I'm a post-Kris Kristofferson songwriter in Nashville. I got there when I was still a teenager, and the songs I grew up listening to you wrote about whatever was happening to you and tried to understand what was happening to you through making whatever art you were making. I saw it as art. I saw it as a form of literature."