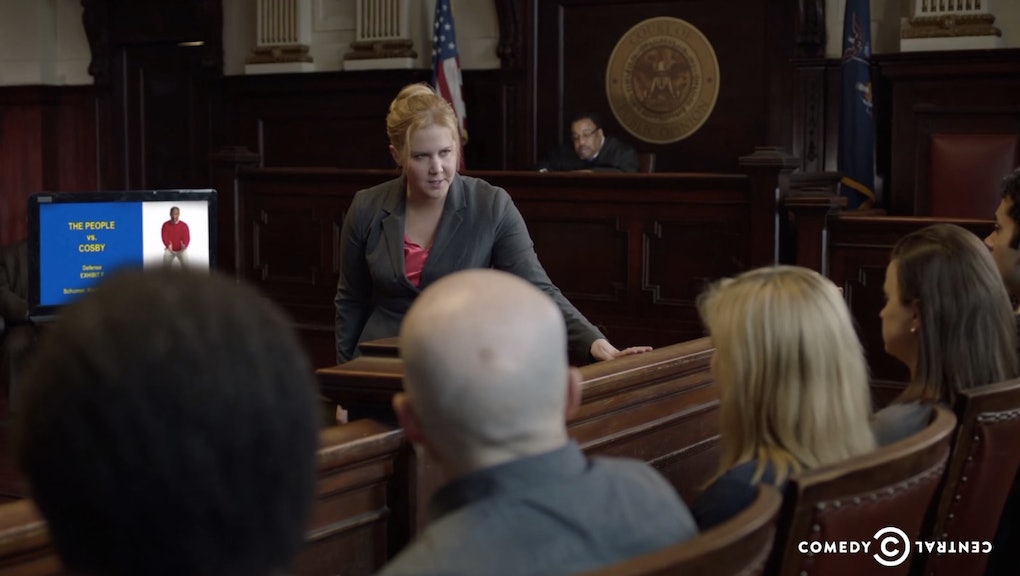 Amy Schumer is fearless when it comes to taking down her targets. So it was only a matter of time before she turned her attention to Bill Cosby and the dozens of allegations that the comedian is a rapist. The only question was how.

The answer came on Tuesday night's episode of Inside Amy Schumer, when she played an attorney defending Cosby in the court of public opinion. Her closing argument: Isn't it easier to just deny Cosby is guilty?

Starting with a silly Cosby dance, Schumer's character appeals to her jury's sense of nostalgia. Her argument isn't about guilt or innocence, as it too rarely is among the public. Instead, she asks, don't we want to live in happier times? Don't we want to watch reruns of The Cosby Show on Hulu?

She even shows a "clip" of the show (using the voice of an actor who sounded like Cosby) to the jury, sharing a laugh with them.

"Let's break this down logically: I am a good person. I like this good show," she says. "Last time I checked, good plus good did not equal guilty."

Tying Cosby's decades of work, including The Cosby Show, to his current predicament has been a consistent strategy for apologists. His co-star Phylicia Rashad called the allegations an "obliteration of legacy" in one interview. People love Cliff Huxtable, is the defenders' point; shouldn't people love Cosby as well?

To make her point clear, defense attorney Schumer pulls out the big guns, giving the jury members (and even the judge) Pudding Pops and Cosby sweaters. Who couldn't feel nostalgic about the man after being reminded of some of his most iconic symbols?

"Ladies and gentlemen, at this point, Bill Cosby probably can't get in any legal trouble," Schumer says, reminding the audience of a painful truth: that Cosby will likely never pay for his alleged crimes. "This is about us not punishing ourselves for loving great comedy."

That's why Cosby apologists will continue to live on. Accepting the accusations against a beloved comedy figure means ruining years of nostalgia built up in brains. It means watching a sitcom you loved as a kid will become a bit harder to do. As Schumer says in the sketch, "Let's remind ourselves what's at stake here: If convicted, the next time you put on a rerun of The Cosby Show, you may wince a little. You may feel a little pang. And none of us deserve that. We don't deserve to feel that pang."

For some Cosby fans, that pang is too much to ask. For the dozens of women who have brought forth claims of sexual assault, that pang is nothing.