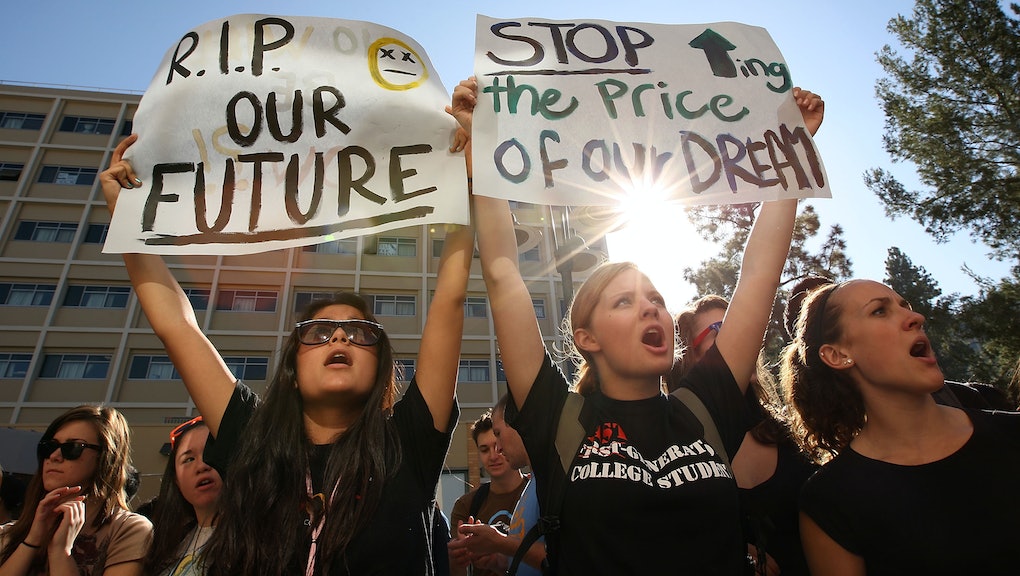 The explosion of student debt in America is unsustainable.

The amount of student debt roughly tripled in the past decade and now stands at $1.2 trillion, shouldered by 40 million borrowers across the country. While all other forms of household debt fell during and after the Great Recession, student debt has risen during the same years, according to the New York Federal Reserve. Nearly 14% of borrowers who were in their first three years of paying back loans were in default in 2013, the most recent year for which we have data.

The need to change course has become evident in Washington. Lawmakers on both sides of the aisle have drafted legislation to address the matter. The Education Department is contemplating loan forgiveness for students who have been exploited by predatory colleges. The White House has signed executive orders to try to stop the bleeding. And the two major Democratic presidential candidates, Hillary Clinton and Sen. Bernie Sanders (I-Vt.), have been keen on discussing the need to transform the way higher education is financed early in their campaigns.

So far, nothing in the way of comprehensive relief or reform has come to pass. The desperation for a fix is obvious for millions of struggling Americans, to say nothing of the economists who worry over the toll that student debt could take on the long-term health of the economy. Here's an overview of some of the ideas that could help avert the crisis:

Make it easier for borrowers to reduce their payments

One particularly cruel aspect of the the student debt crisis is that some of its most damaging effects are easily preventable.

The common conception of someone defaulting on their loans — which can have dire consequences, ranging from having wages garnished to a ruined credit history — is of someone being crushed by huge mountains of debt. But the reality is that most people who default on student loans hold small amounts of debt; they're often low-income earners who drop out of school and never earn the degree that would justify taking on debt.

These borrowers are generally eligible for income-based repayment plans on their federal loans, which would lower their monthly payments or even reduce them to zero as they find their financial footing.

But very often they don't know about these options, or don't realize they can be activated as they fall behind on payments. Rohit Chopra, student loan ombudsman at the Consumer Financial Protection Bureau, has explained that most of the millions of borrowers in default could have kept afloat through some kind of income-based repayment plan.

Last year, a bipartisan bill was introduced (but unfortunately not passed) that would make income-based repayment, which would automatically be withheld from paychecks, the default mode of pay. Such a proposal could go a long way toward keeping these borrowers above water by avoiding the costly consequences of default.

There are also robust loan forgiveness programs that many borrowers are unaware of. The main one is "public service loan forgiveness," a program that forgives loans for people who work jobs in government, education, nonprofits and other public service employers if they make 10 years worth of full monthly payments on time (even through a reduced, income-based repayment plan).

The Consumer Financial Protection Bureau estimates that a full quarter of the U.S. workforce fits under that category. "Forgive My Student Debt," a campaign run by the progressive nonprofit Jobs With Justice, has used data from the Department of Education to estimate that merely about 220,000 have enrolled in the program so far.

Another major angle for lessening the burden of student loans is passing legislation that allows students to refinance their loans. Homeowners and businesses can refinance their loans in order to make a bid at lower interest rates on them, which saves them money in the long run. Last year, Sen. Elizabeth Warren (D-Mass.) introduced legislation that would allow student loan borrowers to do something similar much more easily — but that bill was blocked by Senate Republicans.

"You're never going to be able to fully address the rising student debt until you address the rise in cost of college," Josh Hoxie, who heads the Project on Opportunity and Taxation at the Institute for Policy Studies, told Mic. "We're investing less in education of students, and that's a lot of what's shifted the cost at public schools from the public — from education considered as a public good — onto individuals, which has contributed to rising student debt."

In the chart below from the Center on Budget and Policy Priorities, the climbing red line shows how public higher education institutions have become increasingly dependent on tuition, as state funding has declined:

Fortunately, the public policy conversation is beginning to shift toward cutting the cost of higher education. Tennessee is rolling out a program that makes community college free for all of its high school graduates. In this year's State of the Union address, President Barack Obama proposed the same thing for students across the country.

Sen. Bernie Sanders (I-Vt.) has introduced an education bill that sets its sights even higher than Obama's by proposing that public 4-year colleges should be free. Clinton's camp hasn't aligned itself with free college, but it has recently floated the idea that college should be a debt-free experience — a vaguer commitment, but one that hints at measures meant to cut the cost of college for ordinary citizens dramatically.

The likelihood of Obama and Sanders' proposals turning into law in a Republican-controlled Congress are virtually nonexistent. But the fact that they are even being discussed signals a paradigm shift in ho, and bodes well for the future.