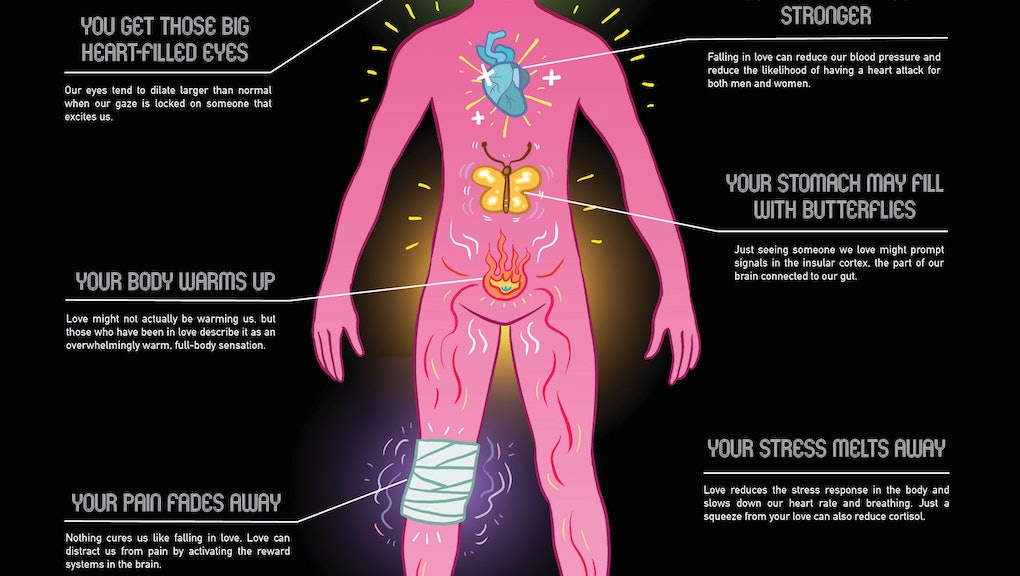 What Being in Love Does to Your Whole Body, in One Stunning Infographic

When you're in love, there are telltale signs: the deleted Tinder account, the text message conversations that stretch until 2 a.m., the distinct feeling that every Beyoncé song was specifically written about you.

While all that evidence is indisputable — just check out your last data bill — there are actual physiological changes that occur in your body when you find yourself with those feelings of L-O-V-E for someone else. It may not be a cocktail, a drug or yoga, but the effects of love are potent and amazing:

Your stress melts away

When your body senses a threat or stress, your brain's amygdala sends a "distress signal" to the hypothalamus, and the body responds by getting worked up and releasing epinephrine, which triggers sweating, heart racing and fast breathing. But love may reduce the stress response, which keeps you calmer. One study found that holding hands with a spouse had a stress-reducing effect, while another found that simply seeing pictures of loving scenes minimized the threat response. Moreover, physical touch between another person reduces cortisol, the chronic stress hormone.

Your mind gets focused

Feeling hyper-focused, creative and driven? You must be in love. Romance has the ability to increase dopamine in the brain, a chemical that interacts with the brain's reward system and helps us stay focused, determined and motivated, according to biological anthropologist Helen Fisher in Nautilus.

Your heart may get stronger

There's a good reason that we think of the heart when we think of love. A 2013 study found that marriage reduced the likelihood of heart attacks for both men and women, and that married folks are over three times more likely than single people to survive three months after heart surgery. Why? One theory is that love may reduce our blood pressure; another is that positive attitudes — a great side effect of love — may also reduce the risk. Boom, clap.

You get those big heart-filled eyes

The size of our pupils is not only impacted by the amount of light in a room — it's also influenced by strong emotion. Studies have shown that pupils dilate larger than normal when we are excited by someone, thanks to all the dopamine, which causes pupillary dilation. The kickback? People find mates with larger pupils more attractive, according to Scientific American.

Your stomach may fill with butterflies

No, it's not something you ate. Our brains and our guts are connected through signals sent to the insular cortex, the part of the brain that maps out bodily states based on emotions.  As one study found, seeing a photo of a loved one prompted activity in the insular cortex. "This could explain why we get butterflies in our stomach," study author Andreas Bartels told the Guardian. (It could also be from stress, if the object of your desire is a new crush rather than a longtime love.)

Blushing is often a reaction to attention from or interacting with someone we feel self-conscious around; the capillaries under our skin expand and make our cheeks pinker. While we don't always love the feeling of blushing, according to the BBC, there's evidence that we tend to prefer people who blush and forgive them more easily. Think of your cheeks like lie detectors for your relationship.

Your pain fades away

Skip the Advil and go for the love. A 2010 study published in PLOS One indicated that love may have analgesic properties, as it can distract us from pain by activating reward systems in regions of the brain like the caudate head, lateral orbitofrontal cortex, amygdala and dorsolateral prefrontal cortex. Hit your funny bone? Consider gazing longingly at your beloved.

Your body warms up

The sensation of being in love may impact your body all over, compared to other emotions, according to NPR. When asked to map out where they felt their emotions on their body, participants in a 2013 study published in the Proceedings of the National Academy of Sciences described being in love as an excited, full-body sensation. That's why love feels so powerful — it takes over everything you feel.