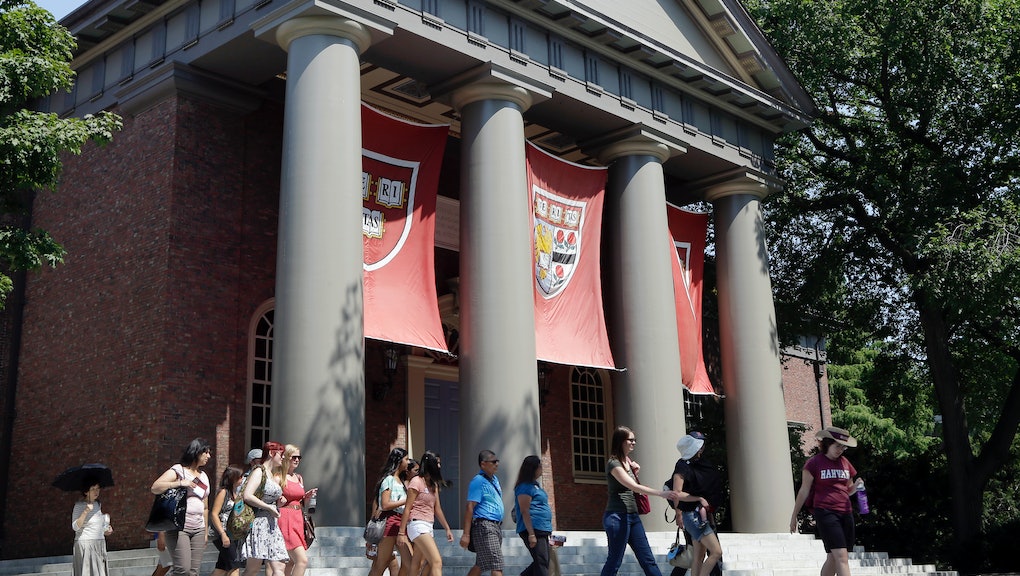 That's one trillion one hundred thirty-one billion nine hundred million dollars, and that's how much more the total U.S. student debt is than what students spent at public colleges in 2013.

To help visualize that, when comparing the nation's total student debt to the amount students spent on tuition and fees at public colleges in one year, the difference is staggering.

According to the information company Experian, the total student loan debt in the United States reached $1.2 trillion in 2014. Just two years earlier, the National Center for Education Statistics found students paid roughly $68.1 billion in 2012-2013 to attend public colleges. While the total student loan debt factors in debt accrued from students who attended public or private institutions and the $68.1 billion figure represents public institutions only, the comparison is still alarming.

"We're at a really interesting and troubling point where student debt has become sort of normalized," Mark Huelsman, a senior policy analyst at the think tank Demos, told Mic. "Tuition used to be low enough and grant aid used to be high enough that total cost of attendance at higher university was manageable with a summer job."

How did this happen? The 13-digit debt figures underscores the need to make higher education more affordable. Studies have also shown student debt can drastically reduce future lifetime wealth by hundreds of thousands of dollars.

In the United States, there has been a growing chorus of calls for universal access to publicly financed education. Democratic presidential candidate and Vermont Sen. Bernie Sanders has made the promise a key part of his platform, saying he would finance it with a tax on Wall Street profits.

But the Sanders solution might be unnecessary. Picking up the tab for American college students could be as easy as a little creative accounting. As the Atlantic previously reported, 2013 data from the New America Foundation indicated the U.S. federal government spent $69 billion in 2013 on existing student loans, grants, tax benefits and work study programs.

"For what we're spending now, we could reroute that money into a tuition guarantee for students in public schools," Huelsman told Mic. If the U.S. embraced universal access to higher education, it would be following a number of other countries. Norway, Finland, Denmark, Germany and Sweden all charge $0.00 in tuition, and average education costs across the developed world are typically far lower than in the United States.

When President Barack Obama announced his hope to see community colleges become "as free and universal in America as high school," his heart was in the right place, but it was not enough. While knocking out tuition would go a long way, it does nothing to address campus living costs, buying books and childcare. Those things have all become more expensive, while real wages in the U.S. have remained largely stagnant for decades.

"Even if you make college tuition free for everyone, you'd still have a lot of students that have to borrow for non-tuition expenses," Huelsman told Mic.

To compete in a global economy, America's most talented young people must be allowed access to universities and to manage their attendant costs without having to burden themselves with crippling debt. Access to education is a fundamental right, and it's critical to ensure it remains one.

An earlier version of this article stated that the sum of the total U.S. student debt "could send every American student to college 17 times over." That calculation was incorrect.