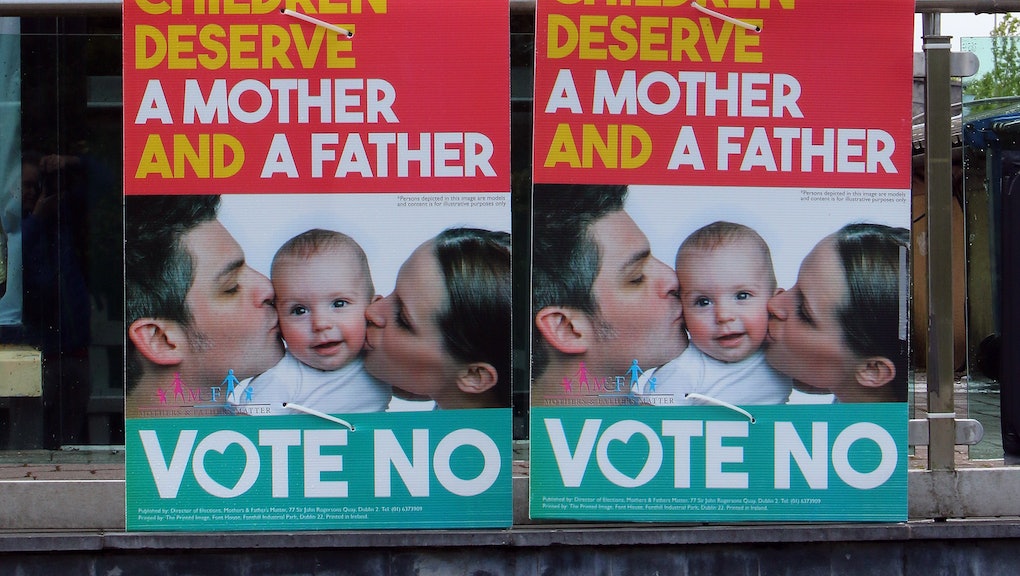 The second-most senior official in Vatican City has issued a statement regarding Ireland's historic vote in favor of full marriage equality for gay, lesbian and bisexual citizens, and it's not exactly an inquiry as to where the Emerald Isle's same-sex partners plan on registering.

"I was deeply saddened by the result," Cardinal Pietro Parolin, the Vatican's secretary of state, said at a conference in Rome on Tuesday evening, according to the Guardian. "I think that you cannot just talk of a defeat for Christian principles, but of a defeat for humanity."

Parolin, who ranks just below Pope Francis and is in charge of the Holy See's entire political and diplomatic apparatus, is the most highly ranked official in the Catholic Church to issue a statement regarding Ireland's vote.

An Irish goodbye to Catholic tradition: The referendum, held on May 22, added language to Ireland's constitution declaring that "marriage may be contracted in accordance with law by two persons without distinction as to their sex." The proposal was supported by every major political party in Ireland and was approved by 62.07% of voters.

The vote came as a major blow to Ireland's Catholic establishment, which had enjoyed near-hegemonic control of Irish domestic affairs since the 5th-century conversion of St. Patrick (there's a reason Irish playwright George Bernard Shaw once wrote, "In Ireland, the people is the Church, and the Church is the people"). For centuries, Ireland may as well have been a Catholic theocracy; the preamble of the Irish constitution even begins with the words, "In the Name of the Most Holy Trinity, from Whom is all authority..." The church's authority often trickled down to influence the majority of Ireland's voters. In 1986, for instance, the Irish people voted down a constitutional amendment allowing divorce by 63.48%.

That influence waned as the country grappled with the Catholic Church's sexual abuse scandals of the 1980s and 1990s, in which hundreds of Catholic priests were found to have abused thousands of children over decades with the knowledge of senior clergy, who were found to have occasionally helped to cover up the abuse.

Young Catholics want change: If the church wants to keep up with the next generation of putative Catholics, it may have to abandon the kind of fire-and-brimstone talk displayed by Cardinal Parolin. The world's youngest Catholics are growing increasingly critical of the church as an organization, and even the Catholic leadership acknowledges that there's a lot of work to do with the newest generation of would-be churchgoers. "The church needs to take a reality check," the archbishop of Dublin, Diarmuid Martin, said after Sunday's mass, according to the New York Times. "It's very clear there's a growing gap between Irish young people and the church, and there's a growing gap between the culture of Ireland that's developing and the church."

The numbers are on the laity's side. According to a Pew Research Center survey published in October 2014, 85% of self-identified Catholics in the U.S. between the ages of 18 and 29 said that society should accept homosexuality — only 13% said it should be discouraged. Three-quarters of Catholics under 30 support same-sex marriage, a record high, but only 36% of all Catholics foresee the church's stance on the issue changing within the next four decades. The difference in opinion on a make-or-break issue for millennials is likely to only widen the gulf between the church and its youngest parishioners.

Pope Francis himself has pushed the notion of a church more focused on social justice and economic equality than on wedge issues like abortion and same-sex marriage, although the well-liked pontiff's statements on political issues have been more than a little confusing. When Francis asked "Who am I to judge?" in a rhetorical response to a question about gay priests, the Vatican press office wasted no time in reminding overzealous journalists that the pope was not endorsing homosexual acts. (A reminder: In 2010, when Francis was but a lowly Argentinian cardinal, he called same-sex marriage the work of the Devil and a "destructive attack on God's plan.")

Not every member of the Catholic Church's leadership, however, is using their position to declare same-sex marriage as a curse on society. The Rev. Tony Flannery, founder of the Irish Association of Catholic Priests, estimated that 25% of Ireland's clergy would vote "Yes" on the constitutional amendment in an interview with BuzzFeed. Among the ordained who supported the amendment: Rev. Martin Dolan, a priest who came out to his entire congregation during a sermon in January, encouraging his parishioners to support the referendum.

The congregation responded with a standing ovation.