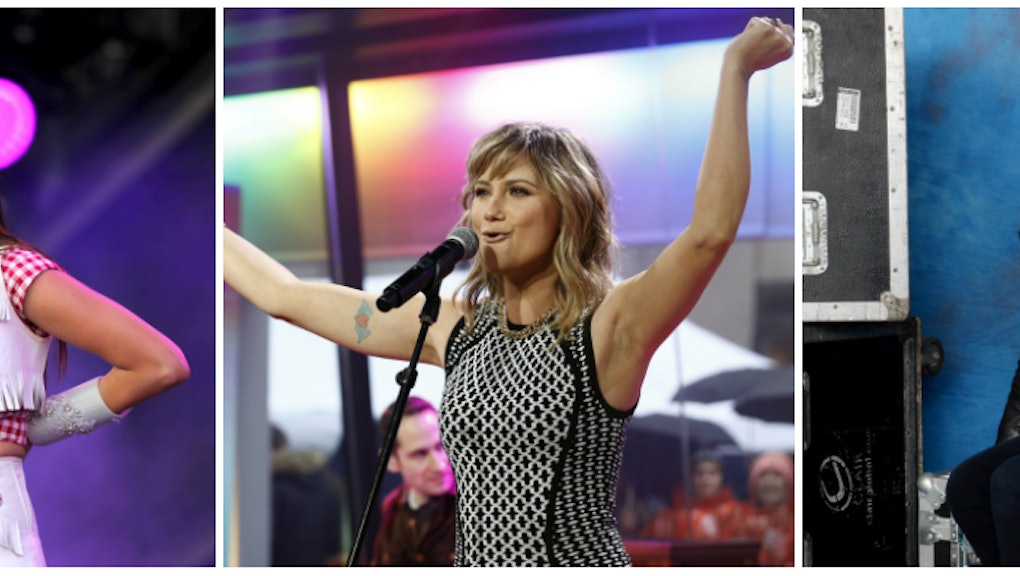 Gender disparity has long been a problem in country music. If you take a look at this week's 25 Billboard Hot Country Songs, you'll see a whopping three female artists — and that's only if you include half-female vocal group Little Big Town. With female country artists certainly not lacking in the talent department, much of country's gender problem can be attributed to disproportionate airplay on country radio. You'd think, then, that as gatekeepers of the country genre, radio programmers and consultants would go to great lengths to ensure female artists get their due. You would be wrong.

Country radio publication Country Aircheck ran a front-page story called "On Music and Scheduling," a guide "to help [country radio] stations sound their best" by self-described "Worlds [sic] Leading Authority in Music Scheduling" Keith Hill. Hill's story started a firestorm when he offered tidbits of advice like this: "If you want to make ratings in country radio, take females out."

He then compared country radio to a salad, with women serving as the salad's less necessary "tomatoes." "Trust me, I play great female records and we've got some right now; they're just not the lettuce in our salad," he said, "The lettuce is Luke Bryan and Blake Shelton, Keith Urban and artists like that. The tomatoes of our salad are the females."

Revenge of the tomatoes: But one problem with female country singers is that they aren't tomatoes — and several of them are on social media. Legendary country artist Martina McBride, whose song "This One's for the Girls" Hill references in his story, was one of the first to take public issue with his sentiments, taking to Facebook to offer her thoughts on what has been dubbed #SaladGate:

"Wow.....just wow. Just read this from a major country radio publication. How do you feel about this statement? I especially want to hear from the females. Do you not like to hear other women singing about what you are going through as women? I'm really curious. Because to me, country music is about relating. Someone relating to what you are really going through on a day to day basis in your life. Did you girls (core female listeners) know you were being "assessed" in this way? Is this how you really feel? Hmmm...."

After posting, McBride engaged several fans in conversation, including Caroline Gennity Grova, whose comment, "Saying that it's primarily a male format with a smaller female component seems hopelessly outdated, something we might have expected 40 years ago, not today" earned an, "I know, right?" from the artist.

Meanwhile, Kacey Musgraves, whose song "Follow Your Arrow" won the 2014 CMA song of the year despite barely cracking the Hot Country Songs Top 10, replied to a fan on Twitter, "Never been called a tomato before. That's a new one. Good thing I love tomatoes." She also retweeted frequent collaborator and revered Nashville songwriter Shane McAnally, who wondered if Hill's comments were "a joke."

With all this criticism being lobbed his way, you'd think Hill might rethink his position. But based on an interview with CMT's Alison Bonaguro after the backlash, it's obvious that Hill is sticking to his guns.

"What you need to do, Alison, is start a crowdfund and raise money to purchase a little pipsqueak radio station in Nebraska or Iowa, and you program it with mostly women. I guarantee it would not be successful," he said. He doesn't see the position as mysoginistic — merely realistic: "People may think I'm a misogynistic sexist asshole. I've got the tweets to prove that. But the fact of the matter is: I stand on a hot day selling cold bottles of water. And the salty snacks people are saying, 'What do you have against me?'"

What's sad here, though, is that Hill isn't wrong — female artists are historically less of a draw in country. But that doesn't mean we shouldn't play them. These vocal responses from major female artists, though, should help lead the charge for greater female representation on country radio. In the meantime, at least we can all agree that tomatoes trump lettuce any day.