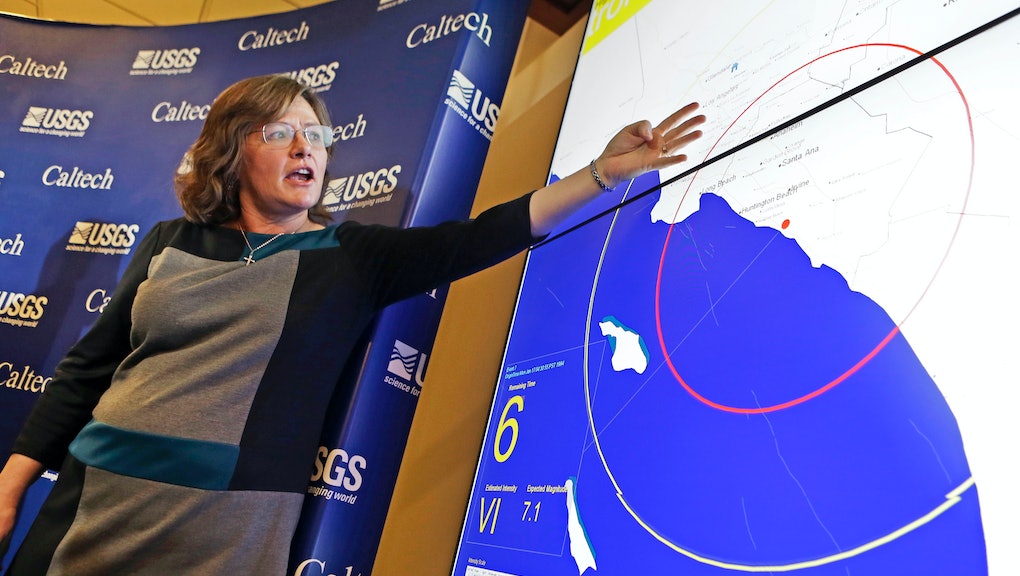 When audiences see Dwayne "The Rock" Johnson's earthquake movie San Andreas this weekend, they likely won't be looking for scientific accuracy about seismology. Not all audience members are Lucy Jones, however.

A seismologist and a member of the U.S. Geological Survey, Jones attended the movie's premiere Tuesday in Los Angeles. After it was over, she shared some concerns about what San Andreas says about earthquakes, while also imparting important safety tips.

Jones' attitude when dissecting the film wasn't one of dismissal but of cautious skepticism. The movie can be enjoyed, she seemed to be saying, but educating one's self about what actually to do in a situation like this is vital.

She even found the occasional accurate part!

Of course, there were other parts that distorted the facts to increase the sense of drama.

She even got the chance to highlight how important a strong woman in San Andreas is to fixing the situation. In other words — Dr. Lucy Jones: feminist hero.

Recent years have seen a tiring surfeit of "What X Movie Gets Wrong About Y Subject" articles, usually involving high-concept movies like Interstellar and Gravity and scientists trying to correct the record. It's easy to understand each group's mission. Filmmakers want to entertain, while scientists want to educate.

Jones' approach is more enjoyable than that usual conversation because she mixed enjoying what she was watching with teaching her followers. That tone is one we could all aim for more. She wrapped it up nicely in her conclusion: You may not learn from San Andreas, but you can use it as a chance to learn instead.