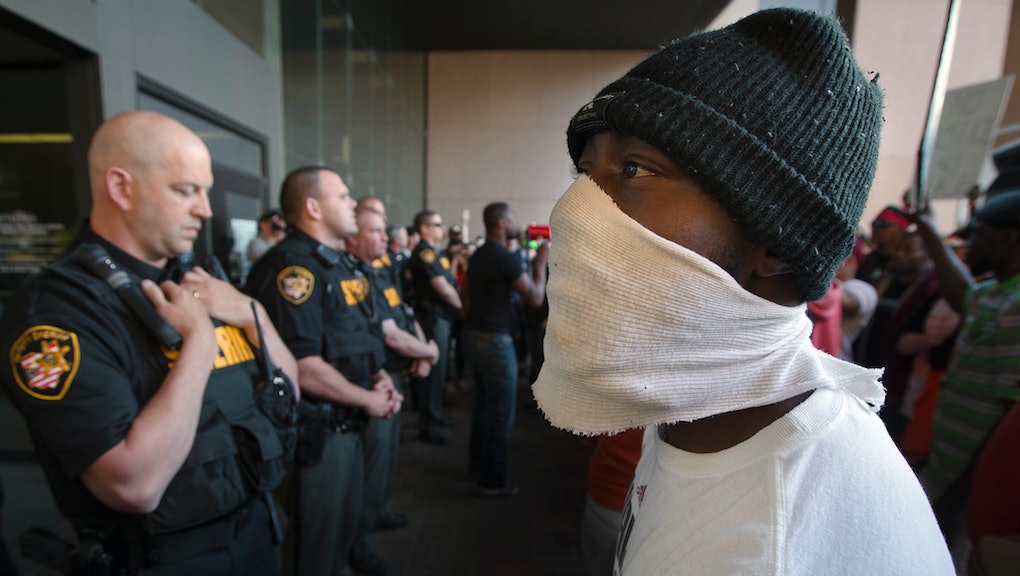 We do not exist in a vacuum.

As the movement against police violence in the U.S. accelerates, what started as localized responses in cities like Ferguson, Missouri, Baltimore, Cleveland and elsewhere have drawn increasingly global interest.

Black advocates and family members of people killed by law enforcement have testified before the United Nations in Geneva, condemning racist police violence at home. Assata Shakur — an activist living in Cuba since 1984 after escaping from prison for what some believe was a trumped up murder conviction related to the death of a police officer — has new political relevance in this era of black resistance.

Palestinians have expressed solidarity — and even lent advice — to demonstrators in Missouri. Protests against police violence have emerged in countries ranging from the U.K. to Israel.

Yet even as America's humanitarian struggle sparks conversations and finds parallels around the world, it is difficult to keep track of how this movement impacts the way we are perceived globally, especially by people on the ground.

In an effort to broaden this conversation, Mic has asked its international readership to answer the following question:

"If you could say one thing to America's government or citizens about police brutality in the U.S., what would it be?"

Though the responses are not globally comprehensive — most come from a small cross-section of countries — they do suggest a bigger conversation is waiting to be had here, and that Americans' growning concern with police brutality is not isolated from the rest of the world. Read a selection of their answers below.

Some responses were blunt:

"Escape while you still can." — Samuel, England

"You can't talk peace while holding a gun." — Jennie, Philippines

"You need to earn respect, not beat it into people." — Vicky, Ireland

While others went more in-depth:

"We watch you. We listen to your news and often it becomes a symbol of aspiration in terms of arts, [economic] and technological advances. The police brutality is no different from other countries, including mine. The racism and social stratification issues are ingrained in every culture. You can create pathways for the betterment of all, with steps that [scream] for humanity. These steps you take will will lead others leaders to help their countries as well." — Vaishini, Malaysia

"Fix your own problems first before intervening outside your borders! How can you have African-Americans shot at with impunity while having an African-American president in the White House? Have you people ever looked at Europe and making tertiary education free for everyone? And finally, can you please end the stupid sexism and disgusting objectification of women on the telly, the music and the Internet? It's the 21st century, America, not the 1500s!" — Zach, Philippines

Some pleaded for introspection:

"Learn from other countries, challenge yourself to be better, more open, accountable and transparent. It can and must change." — Paulo, New Zealand

"Remember what you're being paid for: to protect and serve." — Daniel, Spain

"I'd ask them how they'd feel if one of the victims was their relative." — Priyanka, England

While others were harsher in their critique:

"Why is it when you smack people to the ground with your truncheon or tazor [sic] them, it's because they were 'threatening' you, but if they fight back when you genuinely threaten them, you bang them up for assaulting a police officer?" — Ruth, England

A few invited some eye-opening comparisons:

"Your police [are] as racist and classist as the Mexican police. Let that sink in for a minute." — Johannes, Mexico

"Don't take Brazil for an example because our police [are] as racist and brutal as yours. Hire more women, more gay people, give them a humanized training. And stop the gun culture, of course." — Carol, Brazil

While others gave straightforward advice:

"I would say stop trying to 'help' other countries and help yourselves." — Julio, Mexico

"Invest more in what is truly important, like education, and problems such as these will go away." — Fátima, Portugal

"Train the police properly, so they are better equipped to handle situations without the use of guns." — Roanna, England

"Get rid of guns ... and stop for a moment and look at what you are doing, look at each other. You are all human beings." — Tashi, Australia

"Teach police that citizens are not the enemy. Policing should always use the minimum intervention." — Stephen, England

But in the end, two things became very clear. 1) Our problem is bigger than just the police:

"100 honesty, American police brutality is a major disincentive to come to the USA." — John, Australia