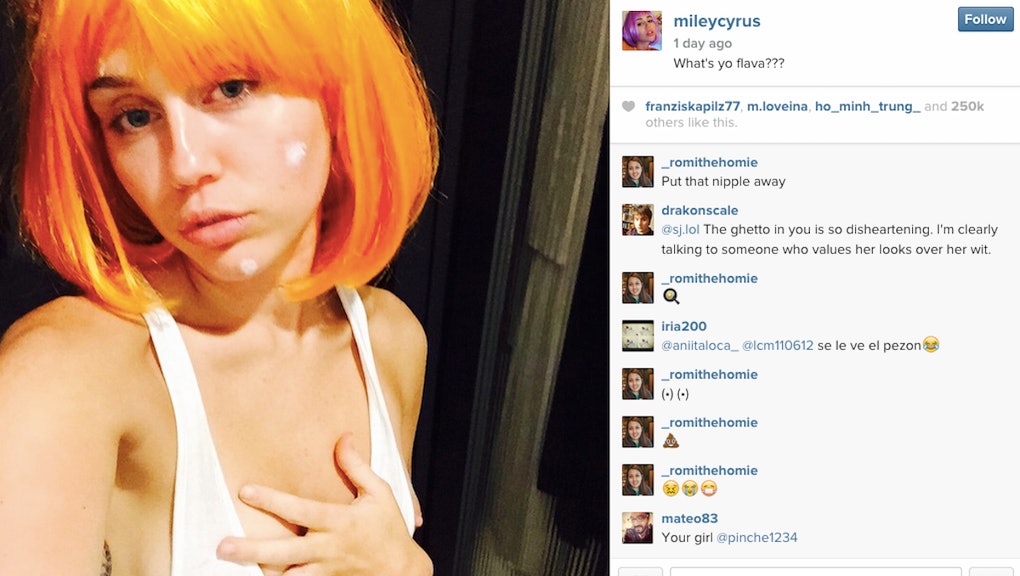 Miley Cyrus is causing a stir again, but this time it's for a good reason. On Wednesday, she posted an Instagram photo with her nipple so subtly exposed, she avoided getting it taken down by Instagram, which bans female (but not male) nipples.

Though Cyrus has a bit of a history of posting suggestive Instagrams, it's surprising she's been able to post a photo featuring her exposed nipple. The social media company has a notoriously sexist user agreement policy, not allowing photos that are "violent, nude, partially nude, discriminatory, unlawful, infringing, hateful, pornographic or sexually suggestive," according to its Basic Terms. Men's nipples apparently do not fall under any of those categories.

Be Free. #FreeTheNipple is a global, social media campaign which stands for gender equality, pushing back against the double standard of allowing men to expose their nipples, while female breasts are either banned or outlawed. Part of the campaign also involves women reclaiming their bodies in a world that often objectifies them.

Cyrus has been a vocal proponent of #FreeTheNipple and has used social media for her feminist activism before. In December, she posted a topless picture of herself, which was removed by Instagram, with the following caption: "Some lame a** deff gonna (flag) dat (s***) but f********k it #practicewhatchupreach #FreeTheNipple #freedats***."

She also made a splash on social media when she posted pictures of herself with bright pink armpit hair to raise awareness for her nonprofit, Happy Hippie Foundation, which offers support to homeless youth.

"The pink pits are saying, 'Don't tell me what to do,'" Cyrus told the Associated Press. "It's back to what I'm preaching in a way, you know, telling these kids. I'm not just saying you be yourself and I'm going to go be Miley Cyrus. I'm saying I'm going to be my [expletive] self too."

Fight for your right. Instagram, media and social media have all been leveraged by people fighting for gender equality. Model Nicole Trunfio posted a picture of herself from an Elle photoshoot breastfeeding her baby, asking people to "#normalizebreastfeeding."

While certain types of social media have reinforced gender disparities with their user terms, they've also provided a platform to fight entrenched sexism. With celebrities participating in these campaigns, these movements garner a lot more attention and enable feminists by the millions to unite in a common cause: equality. That's the power of the "nip slip."