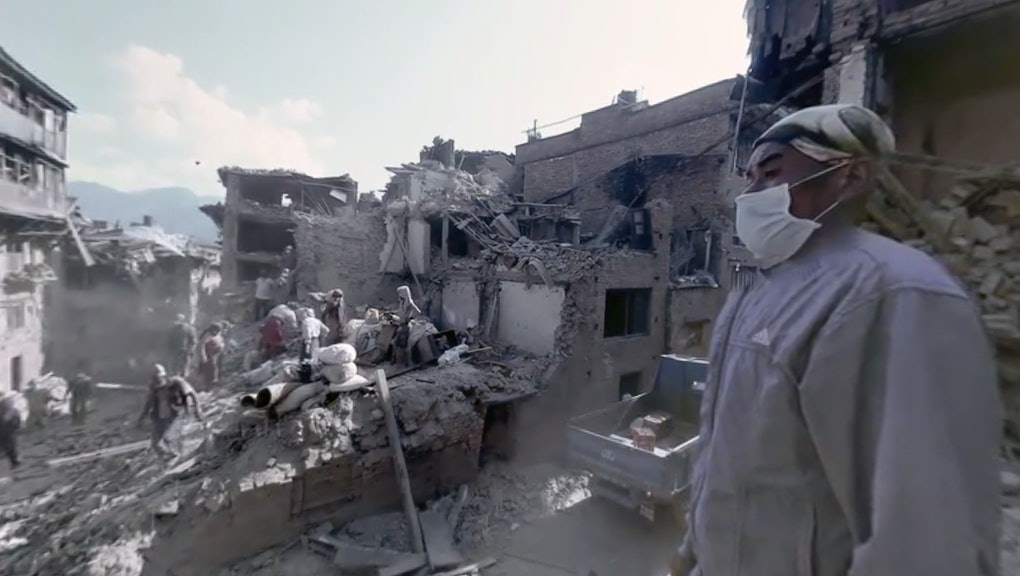 Using Virtual Reality, You Can Go Inside the Nepal Earthquake as It Happened

With virtual reality, we can now experience the aftermath of the 7.8-magnitude earthquake that resulted in the deaths of 8,000 to 9,000 people in April. And it's pretty hard to watch.

Produced by RYOT, the four-minute film "Nepal Quake Project" begins in the middle of the quake. Citizens are crushed. Buildings topple like sandcastles. A Mount Everest-sized avalanche whites out the screen as it takes the lives of at least 18 climbers.

And then the dust settles. The screen is filled with rubble. The aftermath reveals the ravaged city of Bhaktapur, eight miles from the capital of Nepal, Kathmandu. Susan Sarandon narrates the ruins we see.

What makes this footage unique is its interactivity: You can choose how you experience Nepal. It isn't a straight-forward newscast, where your screen follows the reporter's direction. It encompasses much more than the drone footage of the earthquake that was posted in April. You, the viewer, decide where to look. And you become chillingly integrated in the dust-mask-wearing crowd trying to clean the city and not get crushed under the remains of buildings.

Watching "Nepal Quake Project" in full screen makes it feel like you might get lost under the rubble. It's beautifully filmed, highly vivid and immersive. It's built for virtual reality headsets and can be shown in two screens, one for each eye.

This footage intends to shock, and it does — for a good reason. Relief efforts are ongoing, but they can always use more aid. Hopefully RYOT's video project will spur a bigger response. Nepal can use all the help it gets.

Experience the full video above or at RYOT's website, and support relief efforts on their Nepal Earthquake Relief page. More relief options are available here.