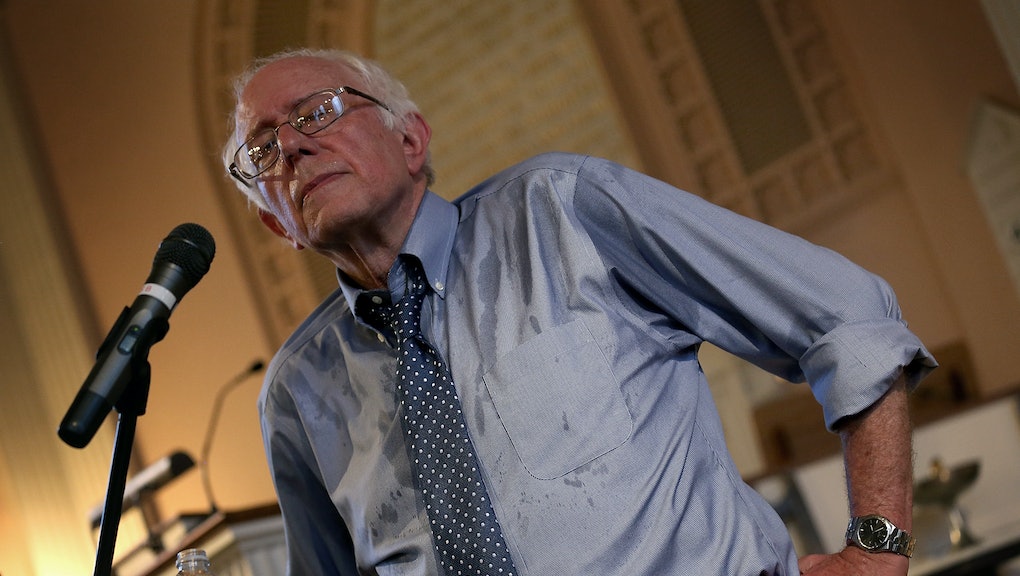 Sen. Bernie Sanders (I-Vt.), a candidate for the Democratic presidential nomination, is facing questions over an essay he wrote for a Vermont alternative magazine in 1972. The piece, written when Sanders was 30 years old, begins with an odd insight into male-female sexual dynamics. He wrote:

A man goes home and masturbates his typical fantasy. A woman on her knees. A woman tied up. A woman abused.

The article, published in the mid-February 1972 edition of the Vermont Freeman, was unearthed by Mother Jones as part of a longer story on Sanders' transition from "a restless political activist and armchair psychologist" to turbo-charged national political brand.

Late on Thursday, the Sanders campaign responded. Spokesman Michael Briggs told CNN the essay was a "dumb attempt at dark satire in an alternative publication" and "in no way reflects his views or record on women."

"It was intended to attack gender stereotypes of the '70s, but it looks as stupid today as it was then," Briggs said.

Bill Kristol, editor of the Weekly Standard and network talking head, even tried to drag the Clintons into the mix:

Whatever unruly vein of thought Sanders was attempting to tap back in 1972, his record as a legislator stands as evidence in his defense. He is a longtime supporter of the Violence Against Women Act and, during his kickoff event in Burlington, Vermont, this week called it "unconscionable" that women make 78 cents on the dollar compared to their male colleagues.

Even Sanders' natural political enemies at the conservative National Review seemed unimpressed by the initial hubbub: "Nobody suspects that he harbors a secret desire to pass intrusive legislation or to cut gang rapists a break. Really, there is only one reason that anyone would make hay of this story, and that is to damage the man politically."