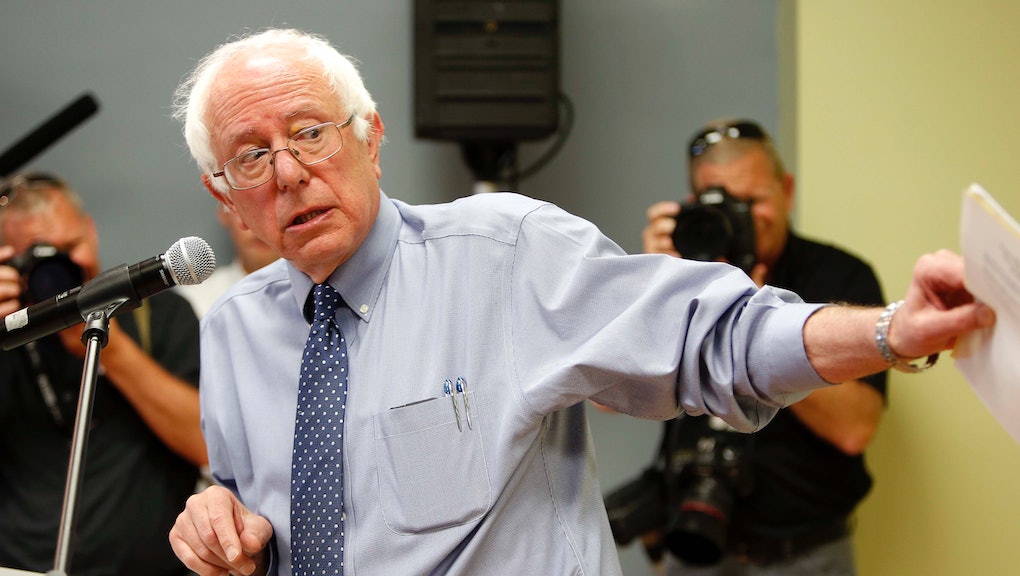 Bernie Sanders Wants to Tax the Rich at 90%. Here's Why That's Not So Crazy

CNBC released an interview Tuesday with presidential candidate Sen. Bernie Sanders (I-Vt.) in which he discussed what it means to have a moral economy in the U.S.

As is so often the case with the self-avowed democratic socialist, the conversation turned toward how to ensure the wealthiest Americans pay their fair share of taxes. Sanders made the case by playfully explaining how high tax rates on the highest income brackets were once not only considered normal in America but were endorsed by Republicans.

"When radical socialist Dwight D. Eisenhower was president, I think the highest marginal tax rate was something like 90%," Sanders said in the interview.

When journalist John Harwood replied by asking whether Sanders considered this to be something that would be too severe today, Sanders dismissed the notion:

At first glance, even the most fervent of Sanders' supporters may feel a flicker of hesitation upon hearing "90%" and "taxes" mentioned in the same sentence. (The comment has certainly made conservatives queasy.) Would a 90% tax rate mean mean that if you happen to make a decent living, virtually all of it goes to the government?

It doesn't. The key word in the tax rate Sanders mentioned is "marginal," and both American history and recent economic research suggest that high marginal income tax rates can coexist with a flourishing economy.

What's a marginal tax rate? Income isn't taxed uniformly — different levels of their income are taxed at different rates. A marginal rate is the tax rate on the last dollar you earned.

"You can imagine a case where the first $200,000 people earn is taxed at a 30% rate, and then starting at above $200,000 that marginal rate increases, and then maybe for every dollar somebody earns over $5 million in a year, the marginal rate then becomes 90%," Josh Bivens, research and policy director at the Economic Policy Institute, told Mic.

Sanders didn't specify at what income threshold he would consider a marginal tax rate of 90%, but Bivens suspects Sanders would think it should kick in "somewhere well into the millions."

"It's not that radical, unless you're calling Eisenhower's America a radical place, and given that no one would propose a high rate like that on anything like an ordinary income, it would basically be irrelevant to the tax burden of the vast majority of Americans," Bivens said.

Until the Reagan revolution, both marginal tax rates and average tax rates (the total share of your income that went to the federal government) were almost unfathomably high compared to what policymakers consider in contemporary American politics. And they happened precisely at a time when the American economy was booming.

"In the 1950s, the highest marginal tax rate was about 90% in the United States — very, very few people paid a marginal rate of that much," Bivens said. "In 1960 the average tax rate for the richest .01% of households in the U.S. was actually more than 70%.

"So we've definitely had experience in the not-so-ancient past of tax rates much higher than we have today, and it's important to note that in the '50s and '60s when we had these much higher rates — both marginal and average — we had faster rates of economic growth than we're seeing today."

As Bryce Covert at ThinkProgress notes, in 2014 a pair of economists estimated that a top marginal tax rate of about 90% for the top 1% is optimal for maximizing government revenue without extinguishing the desire for the rich to earn more.

The ultimate objective isn't simply to tax high income for as much as conceivably possible, but to find ways to redistribute the upward trickle of wealth. It also achieves something that's become a cornerstone of what has emerged as a major 2016 theme — it reduces inequality.