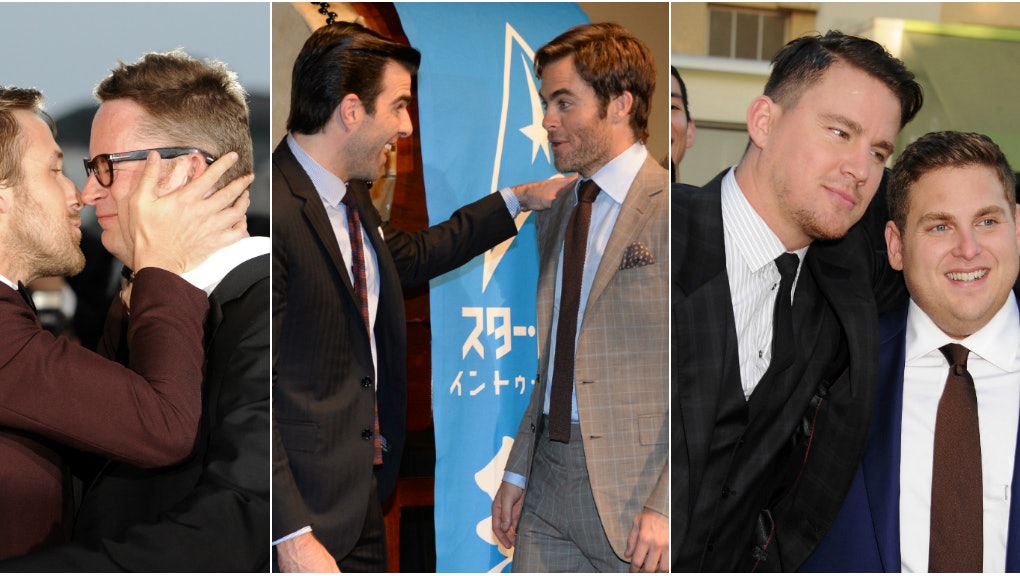 Men in "Bromances" May Actually Have a Surprising Romantic Advantage

"Four men live in a house and support each other through every curve of their lives."

It may sound like a Golden Girls remake. But as we were reminded this week by BuzzFeed's Anne Helen Peterson, it's the setup of one of HBO's most famous shows. Entourage has always been regarded as vapid, plotless and unintelligent — and yet the show ran for eight seasons and is now a movie. Why have we kept watching all this time?

One theory: There's something appealing — indeed, something attractive — about male friendship.

If that doesn't explain Entourage, perhaps it explains why One Direction members are the objects of so many girls' affections, or why nearly every interaction between Chris Evans and Chris Pratt goes viral. It's no surprise so many Internet lists of "best celebrity bromances" aren't made by men — they're made by, or at least targeted to, women who think it's hot when men let out their sensitive side with their friends.

So what is it about male friendships that's so appealing to women?

The appeal of confidence: Not all women are turned on by "bromances" (a term we should just replace with "friendship," no "no homo" disclaimers needed, once and for all). But plenty are.

Sasha*, a 26-year-old from Philadelphia, was more than a little enthusiastic when asked if male friendships were attractive. "Duh! Weren't we all turned on when the boys at camp practically made out with each other, they loved each other so much?" she told Mic.

Theresa, 26, from Los Angeles, echoed the sentiment. "It's endearing when guys show each other affection, like big hugs," she told Mic.

What's so endearing may be men's comfort with expressing intimacy with one another. Even today, there are guys who harbor an "unspoken but overarching fear that someone, in or outside the group, might mistake their homosocial arrangement as homosexual," as Peterson put it in BuzzFeed (a fear on full display in the new Entourage movie). Seeing men confidently reject that premise and embrace one another can be a positive — and attractive — indicator for women.

"Male love is attractive because it means they are comfortable with themselves and their sexuality," New York City resident Lila told Mic. Arianna, a 22-year-old from Texas, added that male friendship "shows that the guy is comfortable enough to be intimate with male friends, even if society is telling them they shouldn't be."

In other words, while men stereotypically bond by, say, watching a game together, women go for more intimate interactions. Male friendships may be attractive because they more closely resemble traditional female friendships, which women may find encouraging, said Greif.

It also helps that a same-sex friendship is a sign a man has a support system outside their relationship. Laura, a 21-year-old from San Francisco, said she was always relieved that her boyfriend had close friends to talk to, rather than burdening their relationship with all his concerns.

"A bromance shows that they can maintain long-term relationships, and that they'll have a life outside of you," she told Mic.

And that's a really good thing, science says. A 2014 study on male macaques illustrated that close male friendships can act as a "buffer" against negative social and environmental stresses. Friendships outside a relationship are crucial for the relationship itself. As Irene Levin, a New York University professor of psychiatry, told Mic, "Your odds of achieving a good relationship are better if you befriend and invest emotional energy into someone with friends."

So not only is your attraction to male friendship real — it's smart. Which might be the best thing we've heard since we caught a Chris Pine and Zachary Quinto interview. Don't get us started on those two.