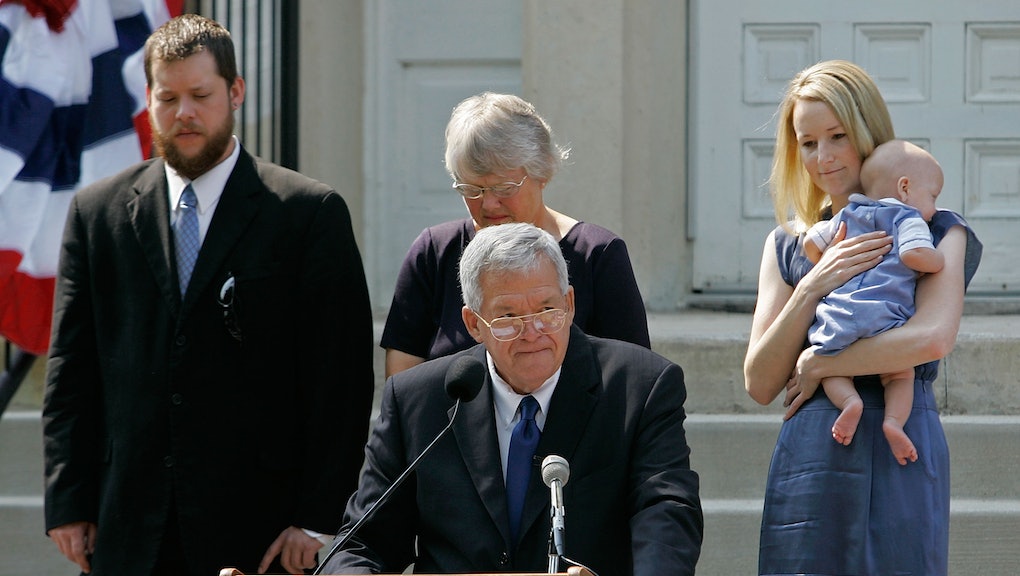 This week, yet another social conservative was caught with his pants down — and it wasn't a Duggar.

Instead, it was a man who used to be one of the most powerful Republicans in the country. CNN reports that the FBI is investigating former Speaker of the House Dennis Hastert for lying to federal agents about $3.5 million in hush money he agreed to pay to a man whom he allegedly sexually abused while working as a "teacher and wrestling coach in Yorkville, Illinois, between 1965 and 1981 before entering politics." FBI sources told CNN that the man in question was a minor during the time of the incident.

Making this already gross story even worse, during his tenure as speaker, Hastert failed to properly investigate 2006 allegations that former Rep. Mark Foley (R-Fla.) had sexual contact with his high school-aged congressional pages. As the tweet below illustrates, gay activist Dan Savage nailed social conservatives' mind-blowing hypocrisy on this issue nearly a decade ago, and it only rings truer now that we know Hastert is also accused of similar misconduct:

While Savage was attacking the smear that Republicans might have used to attack hypothetical Democrats on the Foley scandal, in the process he unintentionally predicted Hastert's current troubles. Savage may have meant to play up how low social conservatives were willing to go to score some cheap political points, but he was also highlighting the kind of hypocrisy Hastert is guilty of now.

As Raw Story reports, Hastert had an extremely conservative voting record on social issues, earning a score of 100 from the far-right Christian Coalition, run by the hate-mongering Rev. Pat Robertson. Hastert tried to push a constitutional amendment that would have defined marriage as strictly heterosexual, and he shot down amendments intended to protect LGBT employees against discrimination. According to Raw Story, he used red meat rhetoric, lambasting "liberal activist judges" on a regular basis.