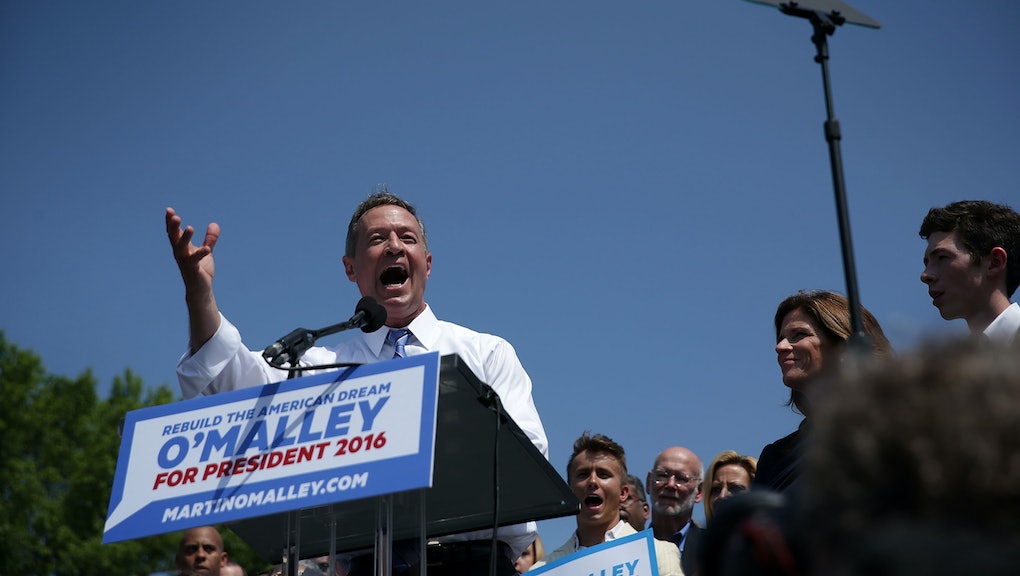 Maryland Gov. Martin O'Malley Throws His Hat in the Ring for 2016 Democratic Nomination

The Democratic primary campaign for president in 2016 just got a lot more interesting.

Former Maryland Gov. Martin O'Malley announced his candidacy on Saturday, using his announcement speech to challenge the narrative of inevitability surrounding current front-runner Hillary Clinton. O'Malley, who is trying to portray himself as a populist firebrand whose progressive credentials fall somewhere between Clinton and self-declared democratic socialist Bernie Sanders, took the opportunity to take a potshots at both Clinton and Republican favorite Jeb Bush.

According to NPR, O'Malley focused his remarks on "an economy that has so concentrated wealth in the hands of the very few that it has taken opportunity out of the homes of the many." NPR also added that O'Malley supporters have recently launched a new super PAC called Generation Forward, in what political analysts have concluded is a deliberate attempt to brand the 52-year-old former governor as more in touch than his older competitors.

"Recently, the CEO of Goldman Sachs let his employees know that he'd be just fine with either Bush or Clinton. I bet he would," added O'Malley, repeating a common theme he has hit upon in recent months. "Well, I've got news for the bullies of Wall Street: The presidency is not a crown to be passed back and forth by you between two royal families. It is a sacred trust to be earned from the people of the United States, and exercised on behalf of the people of the United States."

O'Malley, however, will have some difficulties earning that sacred trust that other Democrats might not. A small but vocal minority of Maryland Democrats will be sure to bring up his tough-on-crime record as governor in relation to recent protests and riots against police violence in Baltimore, where in 2005 his policies led to "108,447 people arrested in a city of roughly 600,000 residents" according to the Washington Post.

More troublingly for the O'Malley camp, he has extremely low name recognition among potential primary voters and trails Clinton by a stunning 56 points among Quinnipiac University poll results. As Mic has previously reported, "Americans remain much more likely to talk big" about unseating political dynasties "than they are to actually vote for it."

So O'Malley has his work cut out for him. But with the Democratic primaries still the better half of a year away, he should have more than enough time to present himself as a genuine contender for the 2016 nomination. Things are about to heat up on the left.