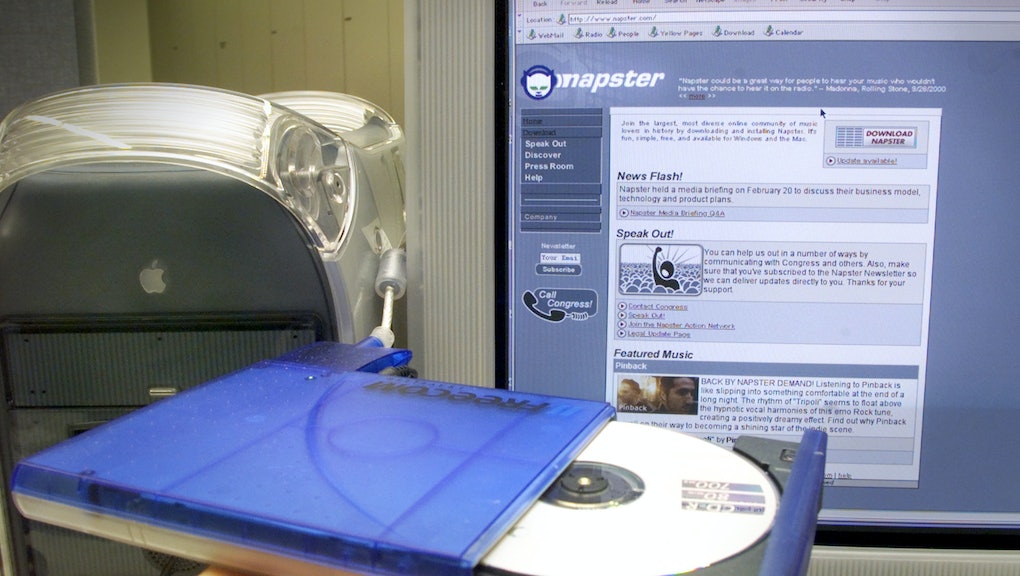 16 Years Ago Today, Napster Changed Music as We Knew It

On June 1, 1999 two teenagers began a revolution with a bit of code and a simple idea. Amateur programmers Shawn Fanning and Sean Parker believed users should be able to share music from computer to computer, without having to deal with centralized servers or a middlemen. They made it happen through Napster. In doing so, for better and for worse, they changed the history of music forever.

The bulk of conversations around Napster often paint it as a villain, and not without good reason. Dr. Dre summed up the majority of industry opinions when he declared, "Fuck Napster." At its core, Napster enabled the illegal download of music that, previously, had to be paid for. That was at the foundation of the music industry's slow decline. But when we talk solely about the artists whose hearts it broke, the industry it destroyed and all the insane policing tactics the industry pursued to save their sinking ship, we miss something fundamental. Napster was a disruptive technology that brought with it a lot of positive space for innovation. Its legacy is far more complex than the popular narrative allows.

A whole new world. Had Napster never burst onto the scene, we would be looking at a very different musical landscape today.

For instance, we take for granted the ease with which we can access the entirety of recorded music through streaming. Each and every one of us would have far more limited musical palates if we were still paying $20 for every album that we wanted to hear on our own terms. Napster forced the music industry to develop digital distributions and streaming technology, which it could have done far earlier. Had the industry developed that technology instead of attempting to suppress it, artists may not have had to shoulder the massive economic fallout that they have.

Luckily, artists won't bear that burden forever; streaming offers both the benefits of instantly accessible music and an increasing amount of pay. Not only that, the decentralizing effect of Napster moved power away from the labels and gave it, in part, back to the artists. Though it's still very hard financially to make it as an independent, distribution via services like SoundCloud or Bandcamp make it easier to build your own brand. And those services wouldn't be nearly as strong without the paradigm shift Napster brought about.

The death of the record store, the birth of streaming. Spotify was built explicitly to combat the piracy that Napster opened the floodgates for. While no streaming service is a perfect system, they're all developing into incredible, consumer-friendly products that are changing the way we utilize music in our lives. Spotify keeps rolling out new innovations in curation and playback; most recently, they introduced a tempo-adapting running feature, which may prove to be a game-changer for amateur athletes everywhere.

Napster's revolution in free sharing also gave new impetus to hip-hop's digital mixtape culture, which now thrives on sites like DatPiff and LiveMixtapes. The breakout tapes shared on those sites brought us artists like Chance the Rapper, Future and Young Thug. The sites frequently highlight rising talents months before their music ever starts to get visibility on a Billboard or iTunes chart. Meanwhile, streaming services have also been supporting unique forms of original live and recorded content, such as Jay Z's recent Tidal B-sides concert and Spotify's recorded sessions, which have brought us quality live recordings from artists like Run the Jewels, John Legend and D'Angelo and the Vanguard.

The art. Napster also indirectly produced a plethora of new ways to release music, all of which buck the old-school, wait-until-Tuesday model.

Without Napster's shock to the industry, we never would have seen Radiohead's In Rainbows "pay what you want" experiment, or Thom Yorke's more recent BitTorrent experiment. "[T]he time is at hand when you have to ask why anyone needs [a record company]," Thom Yorke told Time in 2007. "And, yes, it probably would give us some perverse pleasure to say 'F___ you' to this decaying business model."

Beyoncé's groundbreaking self-titled surprise album is another shining example. The Queen may not have felt the same motivation to create her sprawling, fully visual masterpiece, had the industry not been in major disarray. In turn, it would not have sent the rest of music's most innovative artists racing to come with equivalent distribution breakthroughs. Since then, U2, Run the Jewels, Kid Cudi, Skrillex and Earl Sweatshirt, have all attempted the same surprise marketing strategies in varying forms with varying degrees of success. Each has turned an otherwise straightforward album drop into a festive occasion, celebrating the role music plays in our lives.

Chance the Rapper pulled a similarly experimental move recently, releasing Donnie Trumpet and the Social Experiment's highly-anticipated Surf  through iTunes for free download. The industry's state of disarray has given him the unprecedented ability to create, release and communicate with his fans on his own terms.

"I've had a lot of advice from people [in the industry] who wouldn't give me that same advice today," Chance told Fader in January. "They're almost like, 'Keep going. You're in uncharted territory, and you're helping to shed light on what [the future of the business] will look like, and we're all curious.'"

So Napster did not kill music, even if it seriously wounded its business. More people are consuming music than ever before, and they're creating completely new relationships with it. "I've been sad about the near-death of the record store, and very concerned about artists' economic lives, but it's also been a very exciting, dynamic time," Carl Wilson, a music critic over at Slate, told the Daily Beast in June 2014. "The industry losing some of its control has been positive, just as I hoped it would be at the time — the wide-open way music is discovered today has broken down barriers between genres, between the 'commercial' and the 'artistic,' between audience niches."

It's also resulted in much greater levels of control for artists and fans to create and share music without a monolithic and hierarchical industry guiding anyone's hand. This was Napster's goal from the beginning.

"Back in 1999, we were depicted as these greedy pirates who supported the wholesale stealing of music," Napster's cocreator Parker said in 2012, according to Venture Beat. "We just wanted to make music more free — freedom, not free as in theft."

Now that it's done so, the possibilities are endless.