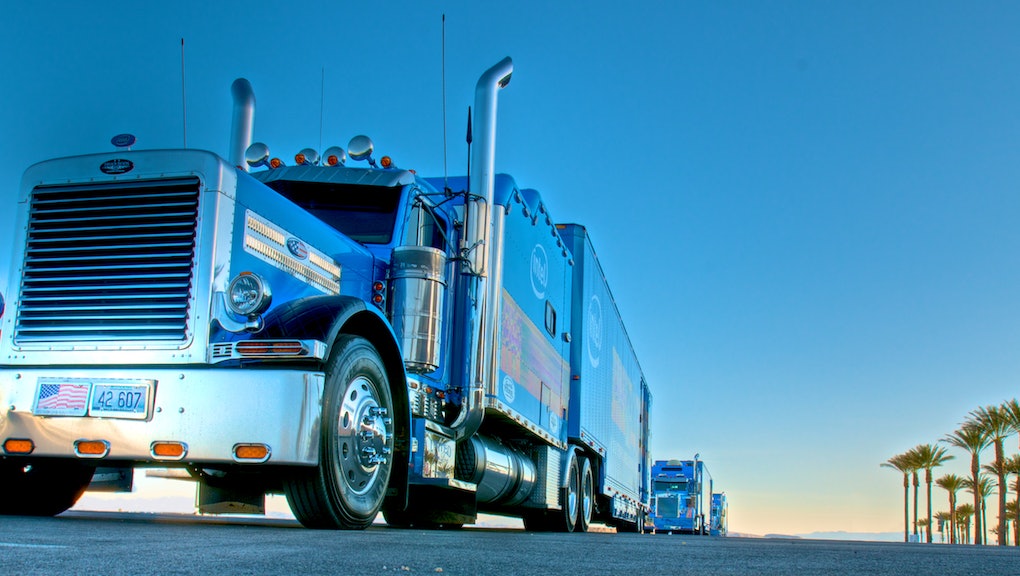 The Future Threat to Middle America No One Is Talking About

The Inspiration, a truck with self-driving capabilities, is already legal in Nevada. Developed by German and American automakers, the truck lets drivers focus on what matters — communicating and planning — as the Inspiration steers itself and monitors its own speed according to other cars on the road. It doesn't look half-bad, either.

How it works: Unlike Google's self-driving car, Freightliner and Daimler's autonomous truck doesn't just take a pick-up point and a drop-off and simply do all of the work in between. The truck performs more of an intelligent cruise control.

First, it uses radars and 3-D cameras to get a sense of the boundaries of the road and whether cars are nearby.

Once it senses its environment, it knows to continue driving in its lane while watching out for obstacles. If it gets close enough to another Freightliner, it can start "platooning," meaning it can sync up with other self-driving trucks to create an aerodynamic formation that conserves energy, saves fuel and keeps other autos at a safe distance.

The future of transportation: There are numerous benefits to adopting self-driving autos: Traffic accidents will decrease to a marginal percentage, carbon emissions will drop and anyone unable to operate a car will be able to get from place to place.

Trucking jobs are the most common job in 29 U.S. states — more common than farming, teaching and secretarial work.

But what you might not know is that trucking jobs are a fundamental pillar of what's left of the American middle class. Trucking jobs are the most common job in 29 U.S. states — more common than farming, teaching and secretarial work. And if those jobs disappear because we replace those drivers with computers, it's not just the truckers who will be affected.

For now, the Inspiration still requires a human operator. So at the very least, truck-driving jobs will be safe for another few years.

Why trucking matters: The country was built on transportation. According to the Bureau of Labor Statistics, 1.6 million long-haul truckers and 2.8 million truckers are in the workforce. The American Trucking Association estimates an additional 5.2 million people are employed by the trucking industry who aren't drivers. That includes operations managers, sales personnel, repair staff and instructors.

Trucking creates an ecosystem of towns and businesses fed by the steady flow of human drivers who stop along their route for basic necessities. Scott Santens, a blogger about basic income and automation, wrote on Medium:

"Those working in these restaurants and motels along truck-driving routes are also consumers within their own local economies. Think about what a server spends her paycheck and tips on in her own community, and what a motel maid spends from her earnings into the same community. That spending creates other paychecks in turn. So now we're not only talking about millions more who depend on those who depend on truck drivers, but we're also talking about entire small town communities full of people who depend on all of the above in more rural areas. With any amount of reduced consumer spending, these local economies will shrink."

Those truckers are like nutrients moving along the roots and outer branches of the middle American tree — and when robots don't need to pull over to spend their money at rest stops, each of those secondary services loses its viability. According to independent research reports as recent as May, the truck stop and convenience store business alone is a $450 billion industry.

If self-driving trucks take over the roads, that puts 70% of the nation's freight shipping in the hands of capable robots. That is, if the trucks of the future are all they're cracked up to be.

Will self-driving trucks actually take over the industry? Detractors say the change toward automation will happen so gradually that the industry won't be irreparably disrupted. Bloomberg economy columnist Megan McArdle argues:

"Overall, I think Santens is right that eventually, we'll solve the problems and self-driving trucks will displace a lot of drivers. That will be good news, because truck accidents are extremely deadly. But I expect the number of jobs lost will be smaller than he thinks, and the change will be slower. So while eventually a set of former drivers will have to figure out what to do with their freed time, that's likely to be a problem for the next generation of truckers, not this one."

Martin Ford, author of a recent book on automation called Rise of the Robots, told Mic a number of other factors will prevent self-driving trucks from taking over. To start: They're extraordinarily heavy objects to be moving around populated roads without drivers, and that any computer system is likely to have its security issues. "The technology might be there, but it's going to take some time," he said.

Another argument against the rapid loss of jobs is the concept that, like dozens of industrial transformations in human history, this change will create other kinds of jobs, like maintaining the automated trucks.

But Santens disagrees. "When we mechanized farming, we transitioned to services — but now we've hit this part where instead of automating muscle power, we're automating brain power," Santens told Mic. "Suddenly, all this work we've been shifted to is automatable. There's a belief there will be all these new jobs. And yes, there will be some, but not the millions on millions that will be lost."

Trucking in the U.S. was a stable, reliable source of income for millions of Americans. But now, as the sector explodes with new job opportunities in the short term, driver pay is also at a decadelong low.

But self-driving trucks are arriving soon. Even if, as McArdle argues, this is far enough off in the future that only the next generation of truckers will be affected, we'll need to find many of those drivers new job opportunities. Jobs that can't be immediately automated — a classification of career that's becoming smaller and smaller in scope.