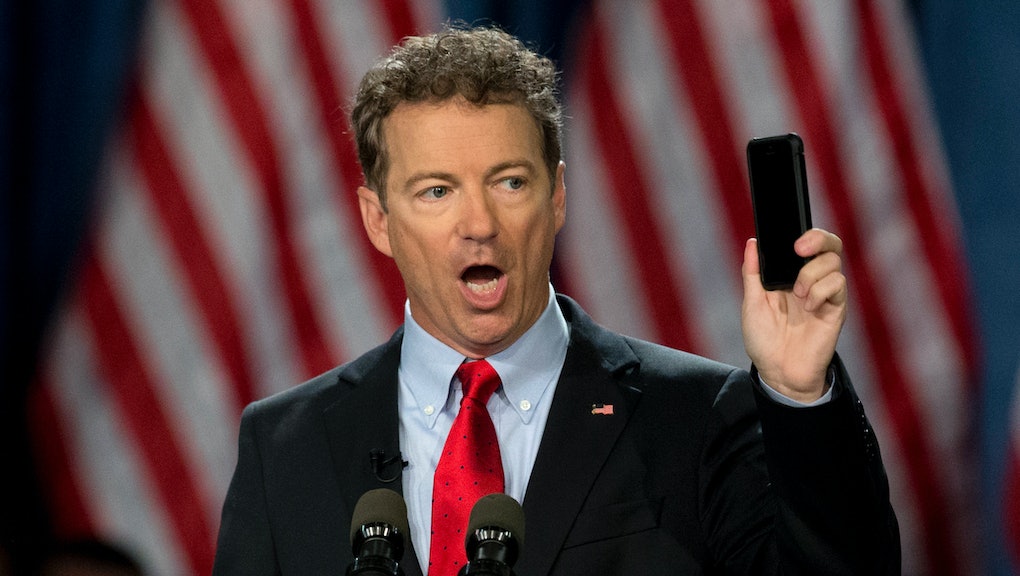 On Sunday night, controversial elements of the Patriot Act were allowed to expire for the first time since its passage following the Sept. 11 attacks in 2001.

Sen. Rand Paul (R-Ky.), whose procedural maneuvers prevented the Senate from renewing the bill in its entirety, declared in a press release that "tonight begins the process of ending bulk collection" of data for mass surveillance.

Paul's efforts, whether motivated by personal beliefs, presidential aspirations or a healthy mix of both, mark an important moment in American politics, not just for the debate over mass surveillance, but for congressional gridlock in general.

In recent decades, as congressional politics became increasingly polarized and meaningful compromise became less common, the practical challenge for legislators was the sheer impossibility of moving legislation through the system without some sort of forcing function.

Legislators began pushing fewer individual bills, instead packing their projects and policies into "omnibus" bills that addressed entire sectors of government rather than individual pieces. These amalgamated bills were often funding bills and therefore "must-pass" legislation. Voting against omnibus bills became too risky because failing to pass the larger bill over disagreements with one or two relatively minor provisions carried the threat of tremendous collateral damage (both real and political).

As this process of smashing through "must-pass" bills became standard operating procedure, the political leadership made another cynical discovery. By waiting until the last second and using the subsequent fear of imminent expiration to force passage, politicians were able to avoid debating elements of the bill that put them at risk while simultaneously ensuring passage.

The lead-up to this year's renewal of the Patriot Act played out similarly: Everyone from President Barack Obama to Senate Republicans warned of the dangers of failing to pass the bill wholesale.

Urging the Senate to act this week, Obama warned of the dangers of letting surveillance authorities expire.

"I don't want us to be in a situation in which for a certain period of time those authorities go away and suddenly we are dark," he said. "And heaven forbid we've got a problem where we could have prevented a terrorist attack or apprehended someone who is engaged in dangerous activity but we didn't do so simply because of inaction in the Senate."

Others in the administration pushed the same message. In an interview with CBS, newly minted Attorney General Loretta Lynch declared that failing to renew the Patriot Act would make us "less safe" and cause us to "lose important eyes on people who have made it clear ... that their mission is to harm American people here and abroad."

Republicans also joined in on the fear-mongering as the vote deadline approached. Senate Majority Leader Mitch McConnell (R-Ky.) said on the Senate floor that failure to pass or extend the act "would mean disarming completely and arbitrarily."

Others were even more direct. "To go dark on this," said Sen. Dan Coats (R-Ind.), NPR reported, "is a risk on Americans' lives."

Historically, this was a tried and true formula that would have ensured immediate passage or at least temporary extension while the requisite arm-twisting was done to secure passage. But for the first time in a long time, it didn't work.

"The people who argue that the world will end and we will be overrun by jihadists tonight are trying to use fear... They want you to fear and give up your liberty," said Paul in his statement. "They tell you if you have nothing to hide, you have nothing to fear. That's a far cry from the standard we were founded upon."

Now, with two more days of mandatory debate forced by Paul, the contentious issue of mass surveillance will be brought to the forefront of civic discourse. This will almost certainly result in meaningful reforms as the Senate takes up the House-passed USA Freedom Act, which curtails contentious mass data collection powers while leaving other elements of the Patriot Act in place.

When Paul rose to speak on Sunday, he knew that his opposition was a beginning, rather than an end. "The Patriot Act will expire tonight," Paul said, but, "It will only be temporary. They will ultimately get their way."

Yet even if they do get their way, this shock is good for the system and will serve as a reminder that the politics of fear and pressure are not necessary and are in fact anathema to good governance, doing far more harm than good.

By forcing expiration and debate, the public has been given an opportunity to nudge public dialogue away from partisan grandstanding toward more meaningful discussion of serious issues. Hopefully, we take advantage of it.