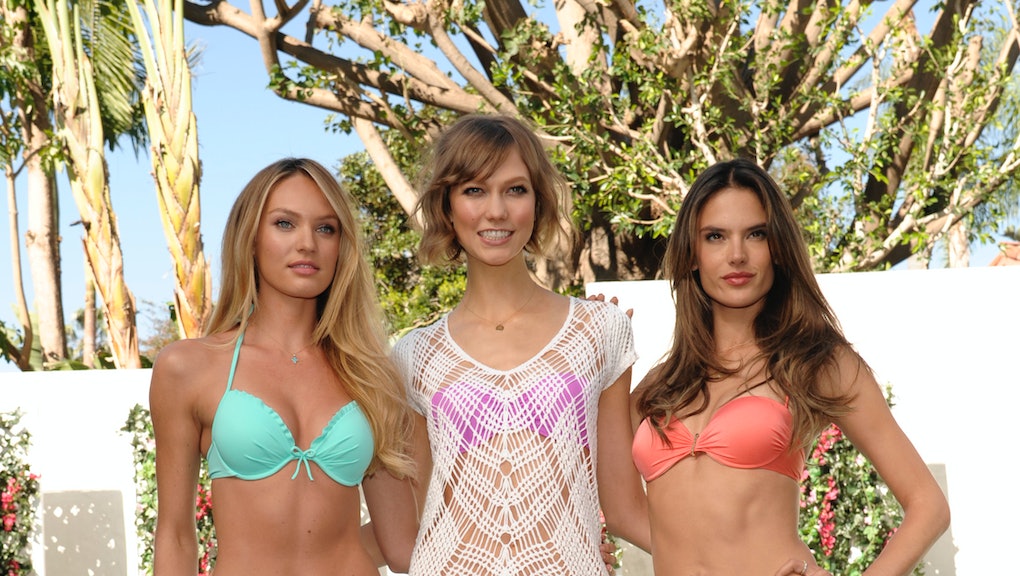 What Our Obsession With So-Called "Bikini Bodies" Says About Us

"Are you beach body ready?"

This tagline of a London-based ad campaign spurred activist vandalism, protests and more than 70,000 Change.org petition signatures. Why? Consumers are fed up with yet another sexist, fat-shaming advertisement promoting the so-called "beach body" standard.

Despite these many efforts made months ago, Protein World, the brand behind the ad, brought the exact same campaign to New York City this past weekend, Gothamist reported.

This ad is hardly the first or only effort contributing to the beach body frenzy. Like clockwork, every summer we're sent into a panic, encouraged to immediately emerge from winter hibernation cocoons built from takeout containers to get bikini-ready. The message that our bodies aren't good enough is directed at both women and men, but women bear the brunt of it, especially since they're largely expected to expose more of their bodies on these beaches than men.

Many people — like those who pushed back on Protein World's ad — reject this pressure and are calling for an end to the beach body expectation. But merely eradicating these ads and even the entire concept of the "beach body" overlooks the deeper systems of sexism at the root of these damaging standards. Here's what our "beach body" obsession reveals about us:

Our obsession with "beach bodies" reveals how normalized female objectification is.

A 2009 Princeton University-based study led by psychologist Susan Fiske revealed how commonplace objectifying women — especially those who reveal their bodies in any way — truly is.

The study found that when men were shown images of "scantily clad" women, the region of the brain associated with tool use lit up. Some men included in the study even had zero brain activity in the area of the brain used to gauge another person's thoughts, feelings or intentions, according to National Geographic's coverage of the study.

These male subjects "are responding to these photographs as if they are responding to objects and not to people with independent agency," Fiske told Scientific American of this research in 2009.

But the problem is not about what women wear or bikinis themselves: It's about a culture that encourages and facilitates objectifying attitudes among men. It's the same cultural root that produces other forms of objectification, like the fact that 85% of American women report having been catcalled before the age of 17, according to a recent Hollaback! report.

Striving to be 'bikini-ready' questions what female empowerment really means.

After they were first introduced in 1946, bikinis were considered a major moral offense. Louis Réard, the inventor of the swimsuit, had to hire a stripper to debut the design as professional models refused to wear the outfit in public, according to Time. Additionally, the bikini was initially banned in Belgium, Italy, Spain and Australia and declared sinful by the Vatican.

While the sexual revolution and women's movement began to buck the moralistic standards that promoted these attitudes — and pop culture icons like Brigitte Bardot and Ursula Andress popularized the bikini itself in the 1950s and 60s, according to Time — women are still inarguably held to moralistic standards of dress. In fact, one need look no further than persistently sexist dress codes that label women "distracting" and shame them for daring to reveal any part of their body.

Plenty suggest that directly challenging sexist, moralistic standards by deliberately flouting them is the most empowering response. But just because the moralistic standards that uphold bikinis (or women's "scantily-clad" bodies more generally) as sinful are sexist and restrictive, it doesn't necessarily mean that wearing little or showing off one's body is empowering.

Ariel Levy explored this in her groundbreaking book, Female Chauvinist Pigs: Women and the Rise of Raunch Culture. Supposedly empowered female sexuality is modeled after pornography and other heterosexist standards designed by and for the benefit of men, she argues. As a New York Times review of the book put it, women end up "confusing sexual power with power, so that embracing this caricaturish form of sexuality becomes, in their minds, a perverse kind of feminism."

The bikini body obsession pushes back on what constitutes empowering clothing.

While some point to the burqa as an oppressive clothing forced upon women, skimpy articles of clothing can be equally considered byproducts of patriarchal oppression.

"Singling out the burqa as the only article of clothing patriarchal enough to merit legal regulation – or even strident criticism – is racist," Sarah Seltzer wrote in a 2009 RH Reality Check article. "Most fashion, from the corset of yore to the bikini to the FLDS prairie dress to the Nike sneaker (made by women in sweatshops, marketed to Western women), tends to hew in some way to patriarchal norms. So the quandary we grapple with, as feminists, is how to acknowledge that fact without alienating, targeting or harassing groups of women for the way they dress."

Similar to Levy's argument that dressing scantily isn't necessarily empowering, this concept calls for a deeper consideration of whether or not any article of clothing has any bearing on personal power at all, as all clothing is in some way the byproduct of larger systems that transcend individual action.

While many have put forth the argument that in light of unattainable standards of beauty, wearing bikinis no matter one's size is a disruptive, empowering choice, true empowerment for many may mean shirking bikinis altogether in favor of wearing whatever makes them feel most comfortable.

Ultimately, as the weather heats up and messages about "beach bodies" inevitably surround us it's important to remember that though these conversations are problematic — and certainly promote damaging, unattainable standards of beauty in and of themselves — they're also about much broader systems. We can talk about rejecting beach body culture all we want, but we can only consider ourselves truly liberated once the systems that create that culture are eradicated.