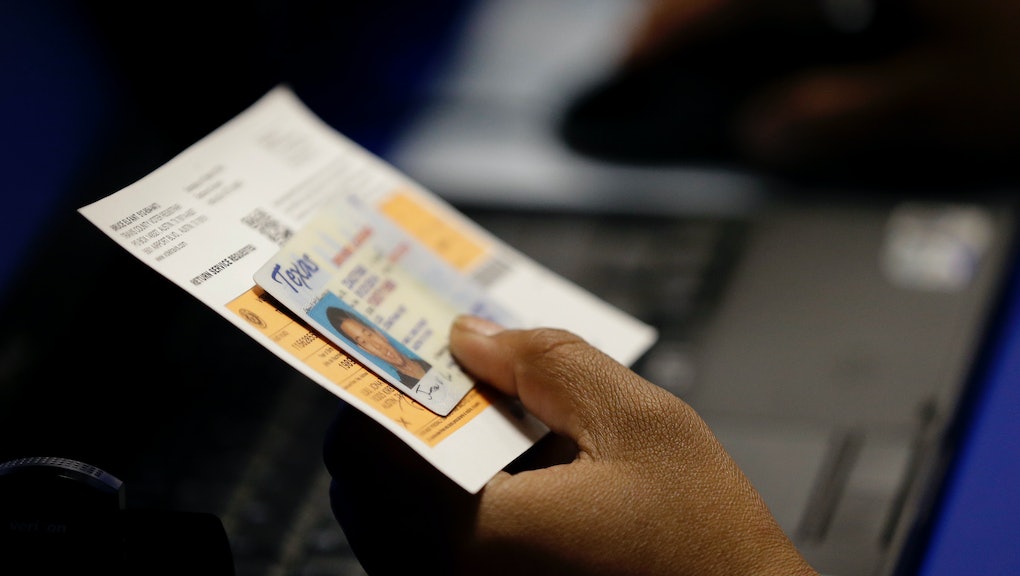 Sean McElwee, a researcher for progressive think tank Demos, compared measures of racist sentiments among white people in each of the 50 states (such as whether they believe blacks are trustworthy or intelligent) to data on voting laws in each state, including when they were introduced and how strict they are.

The results are depressing: "Racism is destroying the right to vote." Based on the numbers, it appears the prevalence of strict voter ID laws has a close relationship to the level of white bigotry in each state. The higher the percentage of racist white people in each state, the stricter the restrictions tend to be.

What it means: Exactly what you've always suspected about voter ID.

While this doesn't necessarily prove voter ID laws are explicitly motivated by racism, there is evidence to suggest conservatives understand that keeping certain kinds of people away from the polls is kind of the point of voter ID laws. One study, for example, found very racist states have seven voting restrictions proposed every two years, while less racist ones see four.

In the predominantly Southern and Midwestern states where the laws are being enacted, getting a valid ID can be very difficult for impoverished people and minorities in particular. It's hard to imagine the Republicans proposing the laws don't know about this.

Another, similar study found voter ID laws tended to pop up in states where elections were more competitive. And, since the Republican Party presides over "an electoral coalition that is declining," voter ID looks an awful lot like a GOP tactic to disenfranchise people who threaten to out-vote their white, conservative base.

"The fact that racial stereotyping still predicts the openness of voting systems and the likelihood of a voter restriction being introduced suggests that the Supreme Court was far too quick to strike down the pre-clearance provision of the Voting Rights Act," McElwee told Mic. "Indeed, in the wake of the decision we have seen even more strict restrictions passed, most frequently in states with high levels of racial stereotyping."

Why you should care: Republicans pretend that voter ID laws are colorblind, but some have certainly let the secret slip. In North Carolina, county precinct GOP chair Don Yelton told The Daily Show in 2013 that if the state's new voter ID restriction "hurts a bunch of lazy blacks who just want the government to give them everything, so be it."

By the way, voter fraud is virtually nonexistent and voter ID doesn't even address the limited fraud that does occur, which tends to be via mail. But voter ID laws probably played a minor but notable role in the 2014 midterms, helping conservatives keep liberal-leaning demographics away from the polls amid record-low turnout.

Research is continually affirming what everyone already knows: There is a clear link between racism and voter ID. It might not be the new Jim Crow, but that era's ugly spirit lives on in it.