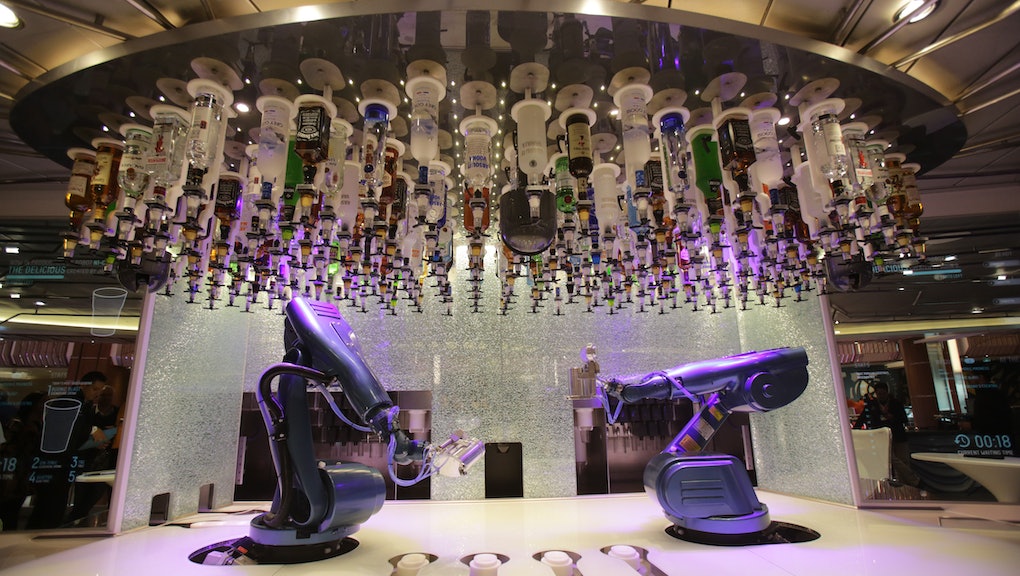 After Robots Take Our Jobs, This Is What the Economy Will Look Like

Imagine a world where robots perform the vast majority of our jobs. Food is factory-farmed by automated machines and delivered to us by fleets of drones and self-driving trucks. Our houses are built by giant, roving 3-D printers. We're free to simply pursue our passions and explore. Now ask yourself: How is anyone going to make any money?

For many futurists and economic theorists, the answer is a "basic income," a wage you receive from the government just for being human.

The idea isn't as far-fetched as it sounds.

Even if you're not working a blue-collar gig, you could be affected, because automation has the potential to damage the job market everywhere it touches.

What is basic income? Basic income isn't a conditional welfare program — rather, it's a check that's paid to individual adults instead of households, regardless of other sources of income and with no requirement for work.

Some governments have already proposed it as a serious possibility. Switzerland came the closest in recent history to passing a law for basic income, but even though the Swiss Federal Counsel voted down the measure, the issue is now spreading to government representatives in Finland. Now American activists and futurists are taking notice.

The idea of a universal, base income provided to all people without conditions is as old as the enlightenment, and even Martin Luther King Jr. once said that a "guaranteed income" could be a simple solution to permanently abolish poverty.

The future of labor: No matter what kind of work you're in, from accounting to bartending, there's some technology, data or machine learning company trying to figure out how to automate or simplify the process. By some estimates, we've lost millions of jobs already, but didn't notice because it happened during the recent recession.

Take for example the robots in Amazon's Internet-connected warehouses. They show a clear vision of how data and technology allow companies to run more efficiently — at the risk of rendering obsolete tens of thousands of manual-labor jobs.

One human still has to organize items between bins, taking them off shelves and organizing them for shipping. But of course, Amazon has been developing a replacement for that job too.

Computer programs and databases can replace white-collar jobs too. IBM's Watson has an automated program at Memorial Sloan-Kettering Cancer Center that looks through case files at a rate of 60 million pages of text per second; it's learning to make diagnoses. The online school Khan Academy, which has over 10 million students worldwide, has created an entire library for K-12 education that could render the classroom lecture virtually obsolete. And in corporate America, human resources staffers and customer service reps are already being replaced by Internet services like OnBoard and Zendesk that take care of jobs like recruiting, payroll and customer service.

Whose jobs are safe? "Computers can't generally do creative things yet. If there's a job where you genuinely create something new all of the time, you're safe for the foreseeable future," Martin Ford, author of Rise of the Robots, told Mic. "But most people do relatively routine, formulaic work."

And even if you don't believe creative jobs can be automated, that doesn't mean nobody is trying. Researchers in Arizona are trying to teach robots to appreciate poetry, and a Parisian robot is already able to emulate popular composers and create new music in their sonic likenesses.

And as for journalists? Certain companies are already trying to automate news-making for financial reports and local sports journalism and, though this writer hates to admit it, they're doing a damn good job. There are some jobs that, for now, seem to be OK, most of which deal with the sensitivities of one-on-one interaction between people, like caretakers and occupational therapists.

"A good example is a home health aid and taking care of the elderly," Ford told Mic. "But a high-paying white collar job given to a college graduate might be easier to automate."

If a job is handed to a robot, who gets that robot's paycheck? Short answer: the people who own the machines. When a business owner develops or buys a machine to perform the job of a laborer, the gains are obviously passed on to the business and its shareholders.

As futurist Jaron Lanier pointed out in his book Who Owns the Future, better technology has already rendered entire industries obsolete, re-centralizing wealth in smaller hands:

At the height of its power, the photography company Kodak employed more than 1450,000 people and was worth $28 billion. They even invented the first digital camera. But today Kodak is bankrupt, and the new face of digital photography has become Instagram. When Instagram was sold to Facebook for a billion dollars in 2012, it employed only thirteen people.

"For every machine that they make, they get to keep that income," basic income advocate and blogger Scott Santens told Mic. "Access to resources are tied up at the very top, so the inequality divide keeps growing.."

This is one of the things that makes basic income to appealing — as income inequality deepens in the U.S., it strains existing safety nets. The need for existing entitlements go up, while our ability to pay for them decreases.

Which leads to the question: How do we pay for it all? This is where most red flags are raised, because since the gains of automation go to the rich, the most logical funding would come from that capital. So most proposals for funding basic income come down to some form of taxation on the very wealthy. One recent proposal put the total cost of a poverty-level basic income at about $2 trillion.

But as Santens puts it, this titanic form of redistributing wealth isn't about playing Robin Hood — it's based on the principle that if technology advances to make people obsolete, everyone should share in the benefit. This is where basic income activists and futurists get a little high-concept, calling into question basic economic principles like the concept of money.

"It's not about stealing from the rich and giving to the poor, it's about a minimum amount of access to resources," Santens told Mic.

But we wouldn't need a radical overhaul of the economic system in the Western world to enact basic income. We'd just need to vote it into law.

So when will we adopt basic income in the United States? No time soon. We have one of the most dysfunctional congresses in history, and the idea that they'd vote on a radical futurist plan for economic reform costing trillions of dollars in the next decade or two is laughable. Even with Bernie Sanders in the Senate.

"It's not about stealing from the rich and giving to the poor. It's about a minimum amount of access to resources."

Still, there are plenty of reasons for both major political parties to back basic income. Even if an expansive entitlement program sounds like a radically leftist concept, there's a strong conservative case for basic income, which is that you could, in theory, replace dozens of entitlement programs with one simple solution that puts the cash in the hands of the people so that they can decide for themselves how to use it.

James Hughes, executive director of the Institute for Ethics and Emerging Technologies, says that if we're a country that already believes in social safety nets, basic income shouldn't be such a crazy idea.

But basic income is picking up steam, quickly making a comeback from being a populist pipe dream and emerging in the national conversation about jobs and the economy. A subreddit on basic income has over 27,000 readers and growing. And it's starting to pop up in the news just about every day.

Without a dramatic countermeasure, the rise of automation is likely going to increase the disparity between the rich or the poor. "It's either going to be widespread exacerbation of income inequality — starving people outside gated communities — or it's basic income," Hughes said.