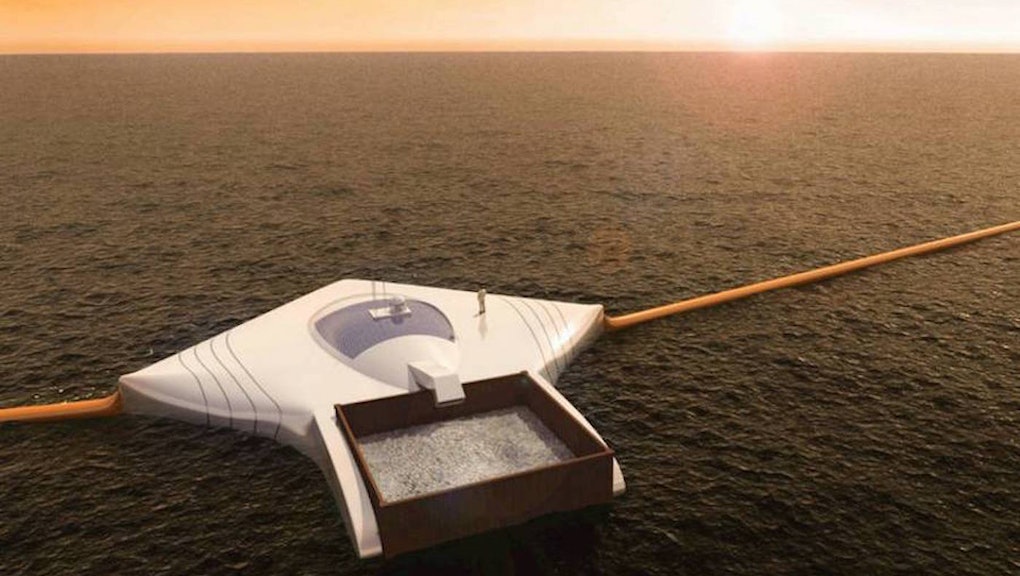 Boyan Slat is not a typical 20-year-old. After the Dutch native went on a diving trip in Greece where he saw more plastic than marine life, he resolved to do something about it.

In 2016, The Ocean Cleanup, the company Slat founded, will be deploying the world's first ever system to passively clean the Earth's oceans on a large scale. Rather than actively collecting garbage, the unique approach uses the ocean's natural currents to steer the debris, where it can then be collected into solid floating barriers. The system is superior to nets, which also ensnare wildlife. If all goes as planned, the collected garbage can be recycled, with costs going to offset the cleanup.

Slat's ocean cleaning system will span 2,000 meters and will be the largest floating structure humans have ever deployed into the world's oceans. Currently, it is anticipated that the system will be launched off the coast of Japan's Tsushima island next year.

"Taking care of the world's ocean garbage problem is one of the largest environmental challenges mankind faces today. Not only will this first cleanup array contribute to cleaner waters and coasts but it simultaneously is an essential step towards our goal of cleaning up the Great Pacific Garbage Patch. This deployment will enable us to study the system's efficiency and durability over time," Slat said in a press release.

The Great Pacific Garbage patch is not merely a floating landfill. The "patch" actually comprises two masses of swirling disassociated garbage, one between Hawaii and California and the other closer to Japan. Plastic and other nonbiodegradable materials thrown into the world's oceans are swept there and to other patches by ocean currents. Over time, it collects, posing an ever-growing danger to marine life.

The ocean can never fully dissolve the garbage, and the danger comes when materials are broken down into small particles known as "microplastics." Birds, fish and other animals consume the junk, which, over time, will collect in their bodies and kill them. "Over 100,000 mammals and over a million seabirds die each year," for this reason, Slat told an audience in New York City in June 2014.

Garbage patches may be far away from the world's big cities, but when they enter the food chain, they hit very close to home. Cleaning the world's oceans from debris will be one of the many challenges millennials inherit from their parents and grandparents. Game changing ideas by young people like Boyan Slat are what's needed to lead the way forward.