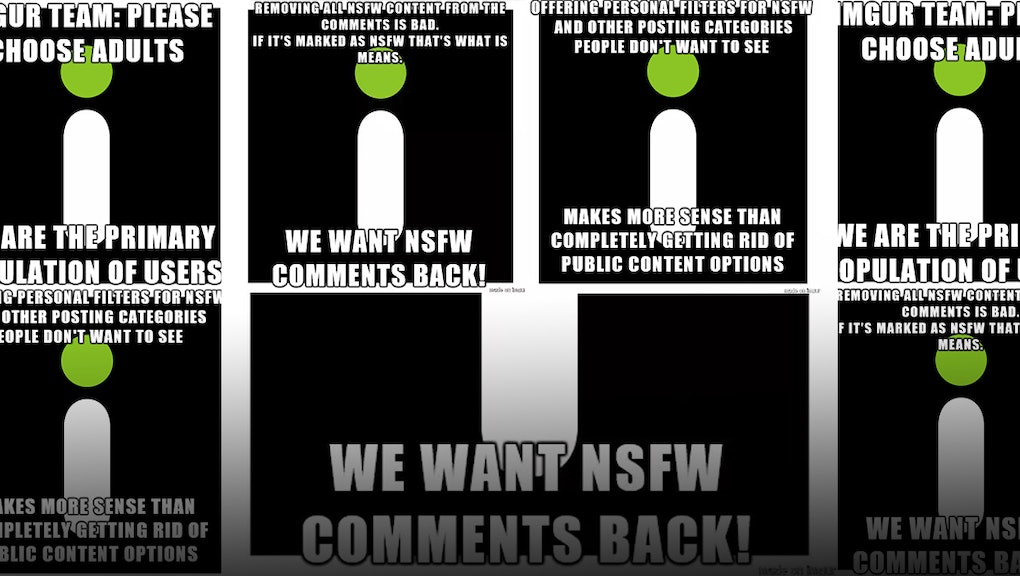 Some users have gotten creative:

The caption of the most-upvoted of all of these images, by a user named stealthkat14, reads in part:

Imgur is making a statement by censoring everything: they believe their site caters primarily to individuals of a younger age — say 10-15ish. I believe this site to have a plethora of consenting adults on it. That being said, while NSFW content is not primarily what we want, and should always be clearly labeled, it is occasionally related to a post and amusing. I believe Imgur to be making a mistake. I implore you to show Imgur that they should choose their target population to be adults.

The post is addressed to @sarah, or Sarah Schaaf, founder, CEO Alan Schaaf's sister and the director of Imgur's community. Sarah jumped on Imgur Tuesday morning to address the backlash.

"I feel pretty sick about it, and it's never my intention or Imgur's intention to upset this community or hide anything from you," she wrote. "I'm hoping to clear some things up if you'll hear me out."

This is not meant to turn Imgur into a G-rated shell of itself, nor is it meant to bring down a ban hammer on our most active users. We value free speech and self-expression incredibly highly, and the sometimes crass humor, ridiculous puns and don't-take-ourselves-too-seriously attitudes make Imgur what it is, and we love this community. There is a place for dickbutt and fine art and weird GIFs and information here — nothing will change about that.

But the reason that Imgur grew from a redditor's side project into a site bigger than Reddit itself (Imgur rakes in 5 billion page views a month) is its supportive, creative and meme-obsessed community. Without the support of its users, Imgur can't be the destination for "the most viral images on the Internet."

Imgurians have been famously accepting of ads, because until now Imgur's ad strategy has never affected the content everyone was allowed to post. But now that NSFW controls are a little tighter, Imgur is seeing a type of ad-hate bubble up that the company didn't expect.

"[G]et rid of the ridiculous loud pop-up ads at the very least," says stealthkat14's post. "And if you're going to be super gung-ho against sexuality, at least remove the sexy singles in my area."