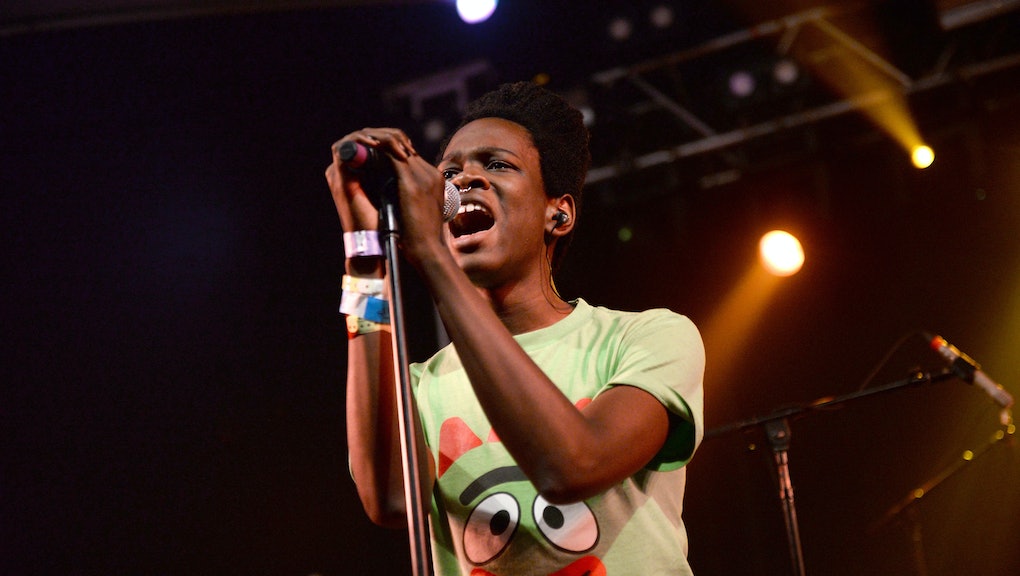 Meet Shamir, the “Queer Black Kid” Who's Turning Pop on Its Head

Shamir is on Team Caitlyn.

"I find it so amazing," the pop singer tells Mic. "And that's just one example of someone getting up the courage to be themselves." It's one day after Caitlyn Jenner's Vanity Fair reveal, and Las Vegas native Shamir — who famously has "no gender, no sexuality and no fucks to give" — is clearly excited about her introduction.

"That take a lot of courage," he says (Shamir prefers the pronoun "he"). "Especially being in the public eye that way and having your debut be such a big thing on the cover of such a big magazine. Big props to her."

Shamir knows something about having courage in the public eye. In the months leading up to his May 19 major-label debut, 20-year-old Shamir became pop's poster child for gender fluidity — and the source of much excitement over a nascent revolution in pop. The New York Times ran a feature titled "Pop Music Catches Up to Shamir," but the singer doesn't consider what he's doing to be particularly earth-shattering.

"I don't think I'm really doing anything that's too different or forward-thinking," he says. "I think the whole 'changing pop music' thing is just more because it's really different for people to see a queer black kid doing it."

Except that's exactly what's different about Shamir: his lack of bullshit. And it touches more than just his image. It also affects his music: It's raw and honest and utterly devoid of pretension. Pop stars like that don't come along every day.

At first, Shamir wasn't thrilled at the prospect of being music's "queer black kid."

"It was really bothersome when that was more of a focal point than my music," he says. But when he met a particular fan on tour, Shamir realized how important he is to kids who feel lost like he once did.

Shamir tells Mic that he's embraced his role as mentor, especially because he wishes he would have had one. "Obviously it's not easy," he says. "When I first started getting mistaken for the opposite sex, and being super confused and angry... It was just very frustrating, and I kind of just like look at myself and say, 'Is this a bad thing?'"

"But you have to be honest with yourself and accept yourself," he continues. "This is just a part of me, this is who I am, and you have to wear that on your sleeve and embrace anything that might seem like insecurity or burden, because it's really not. It's just something that makes you that much more unique."