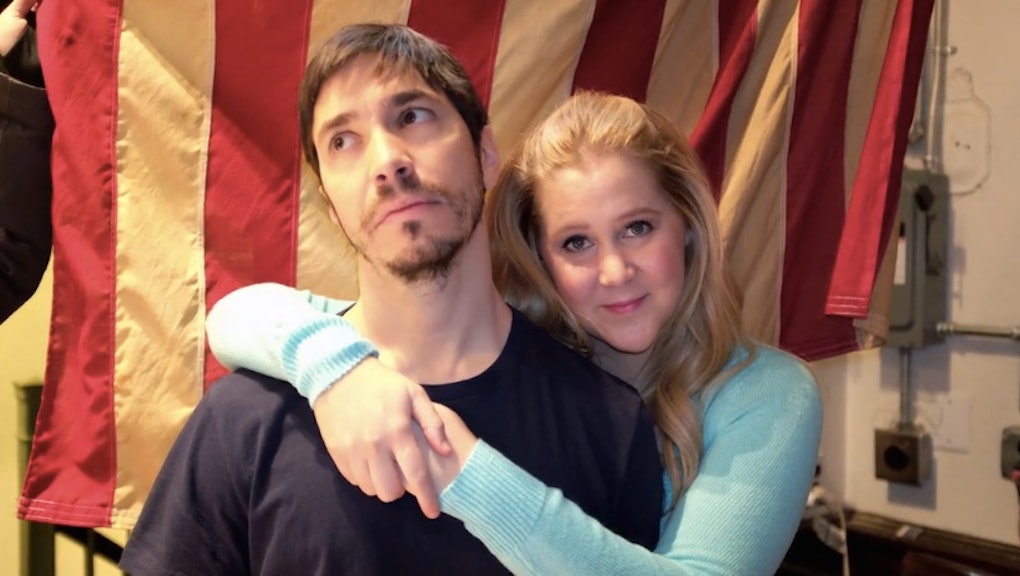 It's an inevitable fight that plagues every relationship — and it all starts with one garment.

In Tuesday night's episode of Inside Amy Schumer, Schumer nailed the struggle so many couples will recognize: the battle between what you want to wear and what your partner wants you to wear.

The premise of the pitch-perfect parody of Say Yes to the Dress — titled Say Fine to the Shirt — is simple. Brian (played by Justin Long) has to give a resigned "fine" to a shirt his fiance Amy picks out for him. "When a woman has to find a shirt for her special guy, what will it take for him to say 'Fine' to the shirt?" the show announcer says in a voiceover.

As anyone who's ever gone shopping with their S.O. will know, it takes a lot.

They select a price range.

Brian obstinately questions why he even needs to purchase a new shirt.

And he's no help with offering any opinions.

Amy surprises Brian by calling his two college buddies, Josh and Beaver, to help weigh in on the momentous decision. They, of course, have nothing to contribute.

It looks like it's going to be a bust of a shopping trip until Brian tries on a Tommy Bahama shirt.

Lo and behold, looking in the mirror at his new shirt and new fiance-approved style, Brian becomes a convert.

This season of Inside Amy Schumer has dished out incisive social commentary on Hollywood's obsession with youth, rape culture in sports and ridiculous beauty standards. But Schumer's also an expert at the "lighter fare" we call dating, showcasing how gender norms infiltrate relationships — and lead to flat-out ridiculous situations, like "fashion policing" a significant other.

Straight men may shame a woman for dressing in "too revealing" clothing, while straight women ridicule their boyfriend for their style choices — think: white tube socks and bowling shirts. Absurd as these battles sound, they're real enough to merit advice columns and op-eds. ("I would never want him to feel uncomfortable in his own skin, I'm just asking for a haircut and a nice pair of jeans!" a reader named Samantha wrote in to PopSugar.)

The overly fawning fiance played by Schumer and the reluctant partner played by Long perfectly illustrate the gender dichotomy: Women care what they look like; men don't. The stereotypes are about as absurd as Schumer's sketch, sure, but the truth is real couples still fall prey to the stereotypes in the aisles of department stores and in closet doorways every day.

Maybe Schumer's latest sketch can shine a light on how ridiculous those battles are — or, you know, we could all just resort to the Museum of Boyfriend Wardrobe Atrocities.