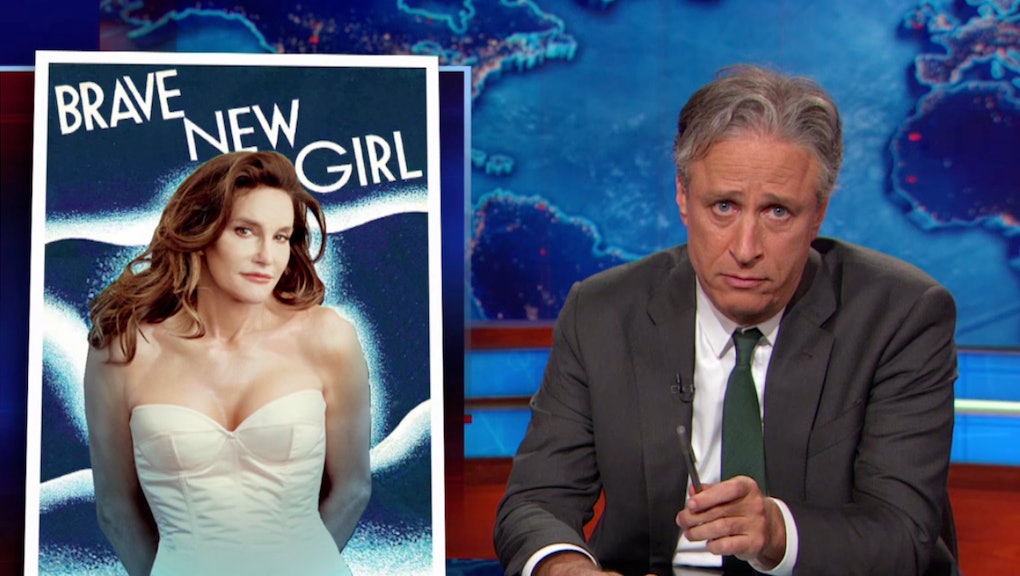 Jon Stewart added his name to the mix of media personalities reacting to Caitlyn Jenner's breakout photo and cover story on Vanity Fair.

The Daily Show host began his segment Tuesday with a bit of misdirection, leading viewers to think his take was going to be about the media's transphobia, and while some of the usual suspects were predictably horrible, Stewart wrapped up a montage of major media figures mostly praising Jenner's decision and commending her bravery.

Then, however, Stewart went to the point:

"It's really heartening to see that everyone is willing to not only accept Caitlyn Jenner as a woman, but to waste no time in treating her like a woman."

What followed next was a montage of commentators remarking on her appearance, and while the praise was gushing and widespread, it became increasingly objectifying as the segment went on. Other montages dissected whether she had used makeup or Photoshop and reminded viewers that, at 65, Jenner was already quite old for this sort of attention. The message was clear.

Stewart's brief segment pointed out the other transition Jenner has already undergone. Far from just a changing physical appearance, becoming a woman in America brings its own set of complicated baggage. Gawking comments from the media are only the tip of the iceberg of Jenner's new life.

As a woman, Jenner can now look forward to her physical appearance, not her talents or mind, being the object of daily scrutiny. Should she ever need to work, she can look forward to earning roughly 77% of what a man makes. Should she ever face physical or sexual violence, she, not her attacker, will be treated with suspicion. As a woman, Jenner will also have to get used to hearing not just new pronouns but other fun words like "shrill," "nagging," "bossy" and "emotional." And then, of course, there's the catcalling, which a "beautiful" woman like Jenner can now expect daily.

A person transitioning to live as her true self is a wonderful thing and America has come a long way toward accepting transgender people. As Stewart so aptly pointed out, though, the real struggle now is to bring up the lives of all women. On that front, there are still miles to go.