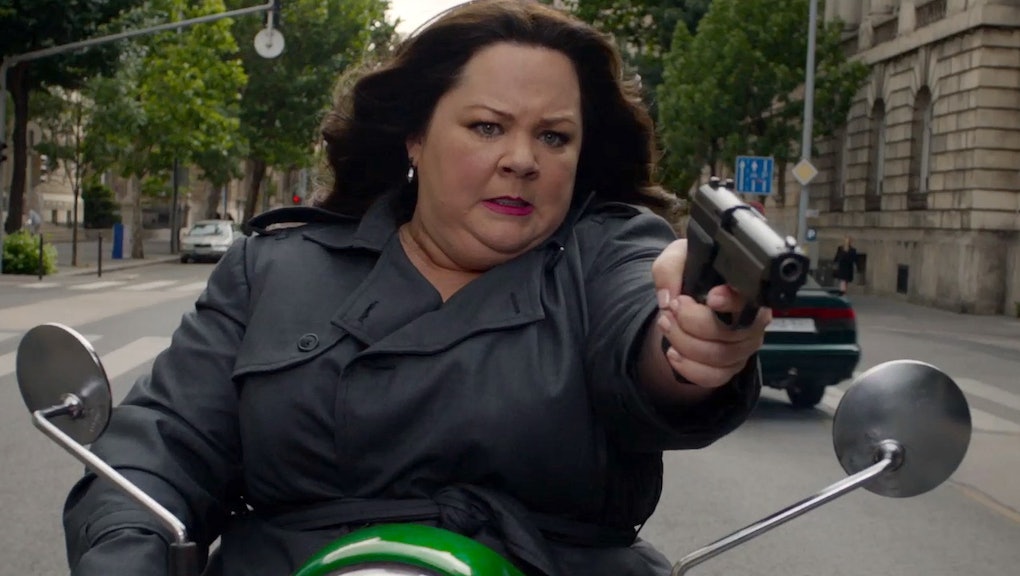 Spy, Melissa McCarthy's new action comedy in theaters this weekend, is shockingly good. The surprise doesn't come from the pairing of McCarthy and director Paul Feig — the duo worked wonders in both 2011's Bridesmaids and 2013's The Heat. Nor is it that McCarthy turns in stellar work as Susan Cooper, a talented CIA analyst who winds up in the field for the first time. She's been fantastic throughout her career.

No, what's shocking about Spy is that at long last, after movies like Identity Thief, the well-meaning but misguided Tammy and even The Heat, the film's goal is to laugh with McCarthy, not at her. It allows her to be glamorous, skilled and flawed all the same time. Susan is the role — and Spy is the movie — McCarthy deserves.

The story of Spy isn't a reinvention of the wheel. Susan, a quiet woman who dreams of being a "real" CIA agent, volunteers to go out into the field after her partner Bradley Fine (Jude Law, masticating an unfortunate American accent) gets taken out by femme fatale Rayna Boyanov (Rose Byrne). Her boss (woefully underused Allison Janney) is ambivalent, but sends her out with increasingly goofy fake identities.

At first, this is super disappointing. Melissa McCarthy dressed in a cat lady wig! How unexpected, said no one. Then something special happens: Susan takes control of her own story. She burns up company funds on a new look and dress, forges her own identity and starts kicking ass. The mission starts making progress because of her rogue play. She makes a damn good CIA agent.

Almost everyone else is incredibly well-served too. As a jerkass rival agent, Jason Statham plays off his action movie image to spectacular effect. He gets some of the biggest laughs in the movie, as does Byrne as Rayna. All of her scenes with McCarthy are amazing; even the longest ones are too short. (Dear Hollywood: Cast them together in everything, thank you.) There's also a side-splitting cameo from a rapper — avoid spoilers on who it is if possible.

If there's a breakout star that's not McCarthy in Spy, it's English actress Miranda Hart. As Susan's friend and co-worker Nancy, she's the perfect mix of geekily supportive and wary. She's just as bored behind a desk as Susan is, and she admires how her friend is taking a huge step. It's a nice note to play, giving McCarthy's character someone who looks up to her, and Hart plays that note beautifully.

Yet Spy belongs to McCarthy. This is her moment, her chance to finally prove she's America's preeminent comedy star, and she just nails it. Armed with sterling reviews, Spy stands a good chance at being one of the summer's top-grossing movies — and that's fantastic news. The more smart, hilarious, female-driven movies like Spy we get, the more stars like McCarthy we'll find. Hollywood could use a lot more of them.