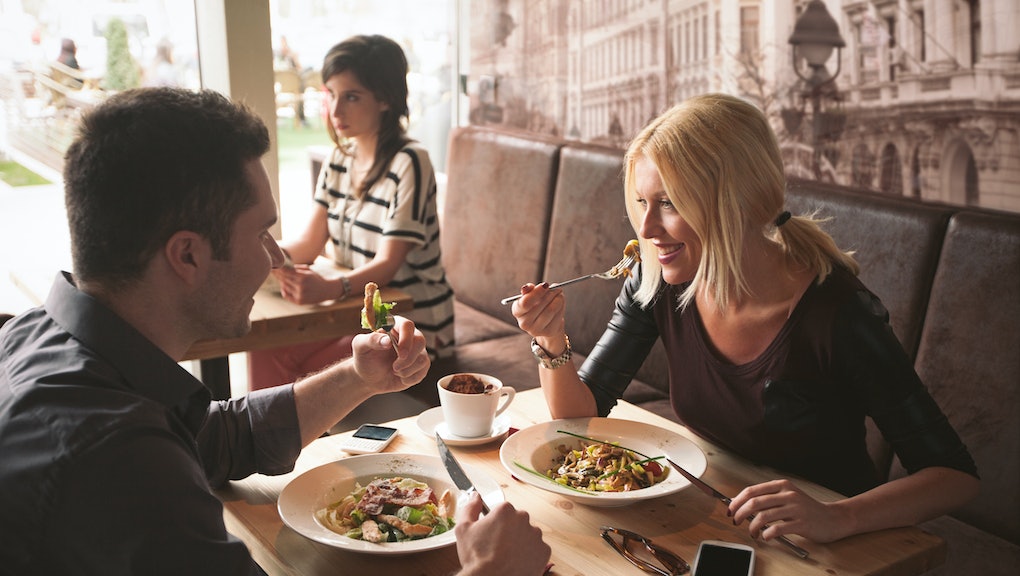 "I was out with this girl last night — I need to change my answer."

Antonio*, a successful businessman in his mid-20s, had just spoken with me a day earlier about the end-of-date phenomenon we'll call "the reach." He maintained that the end-of-date moment where a woman reaches for her bag, implicitly offering to pay for her portion of the meal, was a sincere gesture.

Until his most recent date. When the check arrived, his date offered to pay for her portion since, as she put it, "We both have jobs and could afford it." He ultimately let her pay for half, but she then confessed the offer is often a test.

The feeling that he was being tested bothered him, Antonio told Mic. "All I want to do is the right thing. I'm open-minded, I get it, but I don't want some girl thinking I'm a schmuck because I accepted her offer."

Basically, the rules are confusing. Dating is never simple, but when antiquated dating norms brush up against new egalitarian views for opposite sex daters, the results can be especially messy. And no one wants to fuck it up.

So what are we supposed to do? There are no clearcut answers, nor can one man or woman speak for all their peers. But from talking to a few men* about "the reach," we found there's at least one simple solution: to start being upfront and honest with each other.

"The reach" is real.

"I always pay attention to when a woman reaches for the check and I notice when she doesn't even try." — Kyle, 21

"Of course I know about the reach, man, it matters. It's how you can tell whether a girl is willing to pay for the check, or if she's expecting you to. I look out for it." — Logan, 29

Plenty of us do appreciate the gesture ...

"I need to see a girl go for it, she's not going to be the one who pays, but it shows me she cares, and that means she thinks about things like this, and that's a good thing." — Sam, 23

"Some girls take out their wallets, some girls just offer, but it has to be there." — Devin, mid-20s

... even if we can tell it's not always sincere.

"I mean I always prefer when they offer to pay, even though I know they don't mean it. It's an appreciation for the fact that somebody needs to pay." — Blaine, 26

But some of us would prefer if women didn't use it to "test" us.

"I actually feel better if she doesn't offer at all. If she offers as an empty gesture then that bothers me." — Jeff, 27

In the beginning, we definitely feel pressured to pay.

"No one wants to feel like they're not contributing to the relationship, but in the beginning you can't let them pick up a single check." — Ezra, 30

"If you don't pay, you get a reputation for being cheap, not for being a feminist." — David, 27

"It's definitely held against you if you don't pay for all the date stuff when you first go out. She'll say things to her friends. But eventually you just split things." — Bill, 21

"I'm not anti women paying. I just like traditional roles and most women do, too." — Blaine, 26

But it doesn't have to be one way or another — compromise is ideal.

"Maybe a few dates down the line, I'll let her pay for part of it, or if we're at a movie she can cover the snacks or a cab. But I asked her out, I want to be the one paying." — Jerry, 26

"For a first date sort of thing, if she makes a point of splitting, I split. But otherwise, I pay and kind of go into it expecting as much." — Reggie, 26

"In the beginning, everything is on you, you have to pay for this date and that date. It's what's expected, but in a relationship I can't imagine that stays the same forever. People split rent when they move in together." — Logan, 29

"The assumption that I should be paying always and forever would be weird. Especially because she would always have a better job than me probably." — Dylan, 26

"Once you're more established, there comes a time when you can start letting the other side jump in." — Erik, 30

In a perfect world...

"Our financial situations matter a lot. My girlfriend doesn't have as good a job as I do.  So I think it's only fair for me to step in and grab more of the checks. But if she's excited about something or planned something, I'm not going to fight her on it." — Pete, 23

"It shouldn't be a set of precise rules. It should be a situation where you feel it out and let shit happen. Figure out what makes sense naturally and let it happen." — Jeff, 27

"We'd have a philosophical discussion about the wage gap between men and women and then we'd use our dating situation to address it. Then it wouldn't matter who paid for the bill because we'd know we were both good people anyway." — Allen, 31