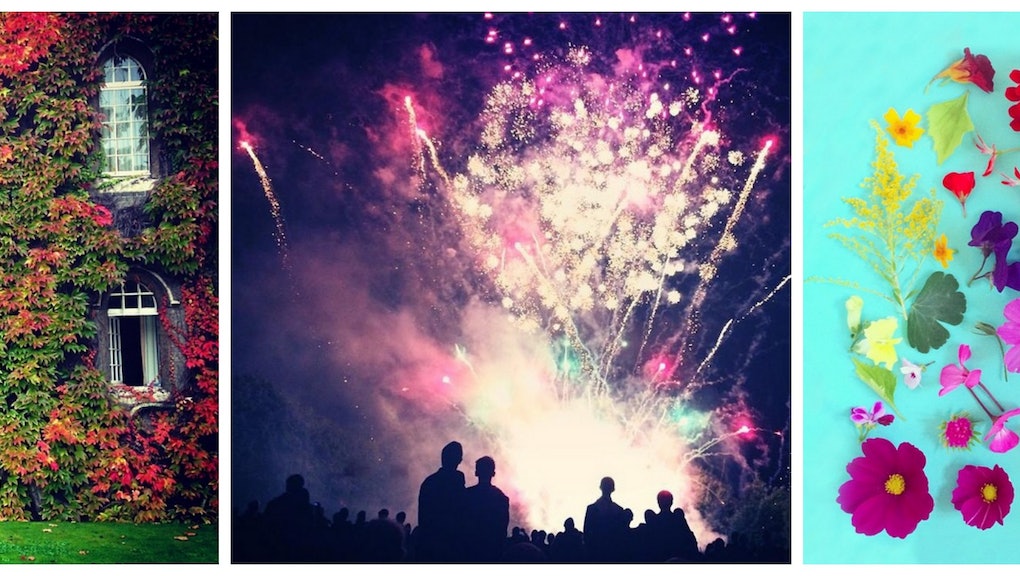 Caroline Calloway is, in some ways, a digital-age embodiment of the honeyed motto "live young, wild and free." The art history student at Cambridge University in England is in the process of writing a fragmented memoir entirely on Instagram. Along the way, she's collected 339,000 readers — and a literary agent who's now turning her adventures into a book.

Calloway's adventures feel like fairy tales. She posts about charming parties, beautiful friends and devoted boyfriends, ivy-covered buildings, twilight strolls and impressive libraries, all accompanied by a two- or three-paragraph vignette designed to set the scene.

"If you look closely you can even spot the bottle of champagne we polished off before we lay down to watch the sun set," she captioned one shot. "For all I know that bottle's still there."

Her posts aren't just regular reflections of a traveling 20-something. Her trick, it turns out, is in the novel way she uses the platform.

They're not delivered in real time, like most people's; her Instagram life is roughly a year behind her actual life. This is by design: Calloway is an aspiring memoirist, and her posts are intended to read like individual chapters. She chooses each photo to help tell the story of a particular moment from her time at Cambridge, and the accompanying captions are not off-the-cuff musings — rather, they're written on a computer and edited by friends. They include snippets of conversation, sensory descriptions and, above all else, details of Calloway's thoughts in the moment. It's a carefully curated representation of her life abroad.

At the age of 23, Calloway is using Instagram to carve out a niche in the world of memoir writing. It's not an easy task, given the genre's ubiquity, but with hundreds of thousands of followers and photos that regularly garner thousands of likes, it's a testament to the photo platform's influence and power to help tell stories.

The woman behind the camera: "I try to mimic my favorite writers, and I know what appeals to me above all else is honesty," Calloway said via phone from England. "I try to do [it] as honestly as I can. I think readers are very smart — they can tell when you're trying to self-mythologize and make yourself look better in a story. I hate that when I'm reading, so I try to just write like the writing I like."

Caroline Calloway is building the perfect version of an imperfect life.

The eagerness that comes across in her Instagram posts is even more apparent in conversation. Talking to her is like splashing your face with Champagne — she's actually as bubbly as she seems online. Calloway she spoke energetically and easily about her life in Cambridge, her experience on Instagram and her plans for the future.

"I do sort of [fear] that all the people who follow me will come to their senses and be like, 'Wow, I really don't have time to read about the average happenings of a 20-something at school in England,'" she said. "I'm thrilled and awed by the fact that I get to share my stories with so many people. It sounds corny to say this, but it's genuinely a privilege."

Though her tendency to document her life didn't begin in Cambridge — she launched a hashtag called #adventuregrams in 2013 for much the same purpose — her current method of memoir writing, as well as her large following, blossomed when she arrived at the university's doorstep.

"If I wasn't posting this on social media, I would be handing out leaflets in the street with these same stories," she said. "It just turns out that posting on the Internet is a lot more convenient."

Juggling the demands of her schoolwork and her social media following can be difficult, she said, especially because the latter can be time consuming. "It's very unglamorous," she said. "The process that brought these words and pictures together on your screen is just as unglamorous and factory-like as you might imagine hot dog making to be."

Calloway's Instagram account betrays none of this, however. It's filled with magical snapshots of attractive men, beautiful women, far-reaching vacations, cutesy trinkets from friends, fancy parties and decadent meals.

This version of curation is prone to a certain kind of preciousness. At times, her account can read like fanfiction — the kind of sugar-coated, starry-eyed tales cooked up by a Cambridge-obsessed teenager. News stories written about her almost always describe her life as a "fairy tale," and waste no time highlighting her privileged and enviable existence.

Calloway said she aims for honesty in every post but does understand where the critiques come from. "It's very easy to see Cambridge as this fairytale life, and I will be the first to admit that it's the most photogenic city on earth, and it's hard to take a bad picture there," she said. "But I'd like to think the reason my stories appeal to so many people is they're in no way sugar-coated."

Still, even the posts that broadcast embarrassing anecdotes are carefully chosen. "Oscar would later tell me that he fell in love with me the first time he saw me in my onesie. (You know, my onesie that looks like a giant strawberry and is made, unsettlingly, for adults?)" she wrote in one.

"If you think that just because I'm outgoing I automatically have the skill sets for small talk, then you, my friend, have not heard the story about the time I accidentally killed a baby squirrel in my sleep when I was 8," she confessed in another.

She conceded her posts can load up on the preciousness. "I thought I was actually avoiding it," she said. But people have asked about it in "every interview I've done ... I guess I should view this as like a very clear indication that even if I thought I was avoiding this, I need to try harder."

Midway through our conversation, she said she wished she were "some sort of social media master." Whether it's intentional, however, she appears to resemble one. In a way, she's building the perfect version of an imperfect life.

Instagram is a valid and powerful way to tell your life story. It's no different from any other memoir: These photos are selectively curated, carefully arranged retellings of events. They pick and choose the parts of the author's life they want to share. Calloway is doing the same thing — she's just doing it differently from the Frank McCourts and Elizabeth Wurtzels before her.

Her creative take on the genre, however, has given her an inroad into its more traditional form. Calloway is working on a proposal for a book of essays inspired by her work on Instagram. She's represented by Byrd Leavell, a literary agent at the helm of the memoirs of essayist Cat Marnell and bro legend Tucker Max, the former king of literary "fratire." Leavell has a track record for turning social media butterflies into published authors, a mold Calloway fits into well.

Her Instagram account does not reinvent the wheel — all social media users broadcast their lives, after all — but she has packaged her own life and made it into a form of currency.

An earlier version of this article stated that Caroline Calloway has a book deal. Calloway's website says her book will be available in January, but according to her agent, Byrd Leavell, she is currently working on a proposal and has not yet signed with a publisher.

Leavell clarified this date in an email to Mic: "It's basically an accurate reflection of the confidence with which she can approach the process. She will have a number of publishers after her, and next winter is a very realistic timeframe."