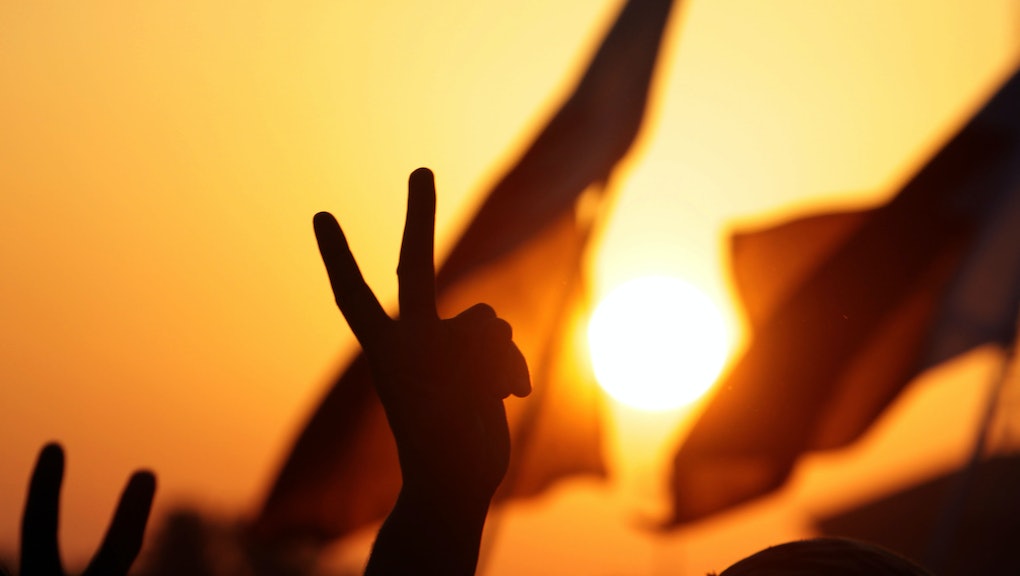 Six years ago, President Barack Obama gave a historic speech to the Muslim world from Cairo. He called for "a new beginning" and apologized for the injustice and misunderstanding that have stained relations in the past. Though Obama faced skepticism from many corners, the speech was generally well-received, and many Muslims, from the Middle East to Indonesia, hoped that his election would mark a clear departure from the mistrust that characterized the years of the Bush administration.

Six years and several revolutions and wars later, Mic asked Muslim young people in the Middle East — perhaps the most tumultuous region of the greater Muslim world — for their reflections and messages to Obama.

To Obama: How can you keep watching the Syrian people die every day under the terrorists of the Islamic State group and the Assad regime? Recently, IS began their attack against our territory [opposition-held] in the northern Syrian countryside of Aleppo.

At first, we thought the U.S.-led coalition would back us, but help has not come. I do not understand why the coalition supports the Kurds in Syria and the Shia military in Iraq but keeps watching the Free Syrian Army lose to IS.

In reality, I actually do not feel that this message is useful. The world, especially Obama, knows about everything happening in Syria.

My message to Obama is to be honest with us. Do not say you support our freedom or the innocent poor people being killed here by the Assad regime for four years, when you've done nothing.

To Obama: I was a teenager when President Obama gave his speech to the Muslim world. He said:

"The situation for the Palestinian people is intolerable and America will not turn our backs on the legitimate Palestinian aspiration for dignity, opportunity and a state of their own."

I am 19 years old, and I am a survivor of three wars. I have seen the horror of what the Israelis do with U.S. weapons. I have seen America do nothing to protect the civilians of Gaza when our homes, schools and mosques are leveled every few years, and when our communities are bombed often between the wars.

Most of Gaza is my age. I want to know now if President Obama can look in the mirror and say to himself in truth that America did not turn its back on young people like me and my friends.

To Obama: As a young person in Iran, I want to thank President Obama for his bravery. It is difficult to grow up in a country that everyone calls a terrorist. We are human! We have hopes and dreams, and we laugh and we cry, just like in America. We thank President Obama for understanding our humanity and for working against those who hate Iran and want to see our home destroyed. We pray that you will keep up hope for a peaceful solution, even when it is difficult. We have never been closer to peace!

I would also like to say that I hope to some day soon come to America and make American friends. I also invite Americans to come to Iran. We welcome you to our homes and our society, and hopefully you will discover for yourselves that we are not very different from young people everywhere else in the world. Our country is a magnificent place, we have a proud Muslim history and revolution, and we are eager to finally share in the world.

To Obama: First, I want to say that Libya will always be a friend to America. We will always thank President Obama for liberating us from Gadhafi's murderous regime. It is also with great despair that our people watched the cruel murder of your martyr Ambassador [Christopher] Stevens.

We too hoped for a "new beginning" with America, just like in President Obama said in his speech. Now, we just pray that your people will not see Libya as a problem, a place of war or oil. We need you to see Libya, especially our young Libyans, as potential partners. We need America's hope now more than ever, and we know that when we save Libya, we will repay America and be an equal, a partner for America in all of the Muslim world.

To Obama: For years, the West criticized the Arabs for our dictators and our "backwardness." In 2011, young people throughout the region showed the world that we too have dignity and refuse to live in chains. Despite challenges, we had elections in Egypt, and the results were clear. We voted for Islamic democracy.

It wasn't long before our dreams were massacred — along with many of our people. First we suffered a coup against our democratically elected President Mohamed Morsi. Then we suffered the Rabaa massacre, where at least 800 protesters were killed. Today [June 4] is the anniversary of China's Tiananmen Square, and so as I respond to the memory of President Obama's speech of lies, I ask America, not President Obama, to learn about Egypt's Tiananmen.

You can't say you respect Muslims and our right to dignity when you support the military that massacres us and keeps us in hiding.

To Obama: America made many mistakes in Iraq. It is difficult for us to forget these mistakes or to forgive them. But now we face a bigger threat that we share with IS. We hope that the U.S. will give more support to the Iraqi military to defend our country from terrorists.

My family and friends still believe in the Iraq that the U.S. claims it was trying to help create. We want a democracy, and we want to live without fear of car bombs and terrorists. We need America to keep its promises to make that dream happen for Iraq.

To Obama: Jordan is a special country in the Middle East. We have always worked with the Americans, and we have built a country that is a leader in the region, just as America is a leader to the world.

Today we face more challenges than in 2009 when President Obama gave his beautiful speech in Cairo. In Jordan, we are just miles away from IS terrorists. Our military has already sacrificed, and our people live in fear. IS is very offensive to us as Muslims. They kills Muslims and then say it is in the name of our religion. It is not! They have stolen one of the most important thing to us, our religion, and we will take it back.

My message to Obama is that we are ready to lead. We are America's best friend in the region, and our military is strong. Our king is brave, and we hope America will fight by our side in our war against IS.

To Obama: The people of Syria have an important question for Obama that we are all asking in our battle with IS right now. Why do you defend the Kurds against IS but not us? We need that help now more than ever.

Why can't the coalition planes respond to the huge military crisis in Aleppo right now?

The coordination between [Syrian President Bashar] Assad and IS is clear now. Assad's jets are attacking us in conjunction with IS, targeting northern Syrian towns like Tal-Refaat, Mar'a and today Azaz, with barrel bombs and shelling. If the north falls, our battle for Aleppo will be finished, and the rebels will be wedged between IS and Assad's forces — after four years of suffering already.

We have spent years under barrel bombs, chlorine bombs and other attacks against civilians in our towns. These attacks continue today from IS and Assad, and we need America's help.

To Obama: Your words do not erase your crimes against Muslims. The Israelis could never continue the illegal occupation of our lands without Obama's support. Many tell me that the Americans just don't understand what the Israelis are doing. But your leaders do. So we don't say we hate America, because we hope in many ways to build the success of America in a free Palestine, but we do hate your leaders.

Because of this, my message is to the American people, not to Obama or other leaders. Your government is strangling us. The Israelis have tried to eliminate us for more than 60 years, and we have fought every day to stay on our land. The rest of the world has joined our struggle for dignity, and it is only the American government who stands with the Israeli crimes. You are lucky to live in a democracy. You must use your fortune to push your government to stand for justice and to stand with Palestine. Join the rest of the world in support of the Boycott, Divestment and Sanctions movement to pressure an end to the occupation!

To Obama: The speech by President Obama showed respect and hope for peace. However, to most people in Yemen, we cannot see America that way because of the actions of the government. They have supported criminal leaders in our country on all sides, killed civilians with drone strikes, and allowed civilians to be the casualties for regional power struggles.

We still believe that we have common values with America. Many Yemenis dream of building a country like yours. But we cannot do that under the siege of bombs, drones and politics that further destroy our poor but resilient nation.