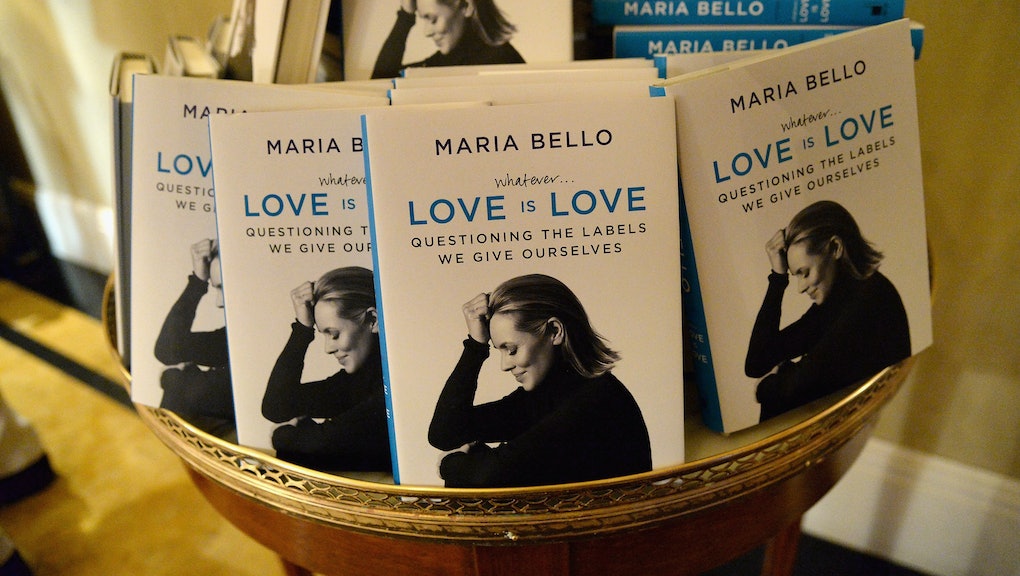 The headline "Maria Bello Comes Out As Gay" made waves back in 2013 after the Coyote Ugly actress wrote a touching Modern Love essay for the New York Times about her same-sex relationship.

But there was just one thing: The headline was misleading. Maria Bello did not come out as gay; rather, she came out as a self-labeled sexual "whatever." Bello is part of a sexual fluidity movement that prioritizes love and human connection over restricting, often loaded sexual labels.

The idea that human sexuality exists on a spectrum has been around for years, but it's only recently gaining acceptance and support. Everyone from Bello to Miley Cyrus to soul-searching college dudes are refusing to sum up their sexuality in traditional terms.

With her new book, Whatever... Love is Love, and numerous interviews over the past few months, Bello is on a mission to keep the momentum going. Here are some of her most powerful quotes that demonstrate why our relationships are so much more than the limiting labels we place on them.

1. "Figure out which labels disempower you and which labels shine with the light of the beauty of who you are or are meant to be."

For those of you thinking, "Isn't 'whatever' a label, too?" — it is. But as Bello recently told the Daily Beast, it's one she feels is empowering and has ultimately afforded her the freedom to fall madly in love with her social activist girlfriend, Clare Munn. Label fatigue is real, and Bello's is just the latest story in which people feel radically freed by choosing to live (and love) with the ones that fit them best.

2. "Sexuality is so complicated ... more complicated than we're willing to talk about or admit."

At the heart of Bello's anti-label crusade is the story of how she — a woman who had only ever been in love with men for her entire life — ended up in a primary, sexual relationship with another woman.

Research supports the idea that human sexuality is rarely black and white; in writing her book and telling media outlets like the Bay Area Reporter that "sexuality is so complicated," Bello is helping give this conversation more of the attention it deserves.

3. "My feelings about attachment and partnership have always been that they are fluid and evolving."

In the Modern Love essay that started it all, Bello is quick to point out that although her relationship with her son's father, Dan McDermott, has changed drastically over the years, it will always be a partnership at its core. "Just because our relationship is nonsexual doesn't make him any less of a partner," she writes. "We share the same core values, including putting our son first."

This approach is one the experts approve of: One of the benchmarks of successful co-parenting after a breakup is an energy of support between the exes.

4. "A partner is someone you rely on in your life — for help, companionship, mutual respect and support."

Bello follows up the above statement in Chapter 1 of her book with a few sentences questioning where our preconceived notions of "partner" come from, eventually writing, "Many married couples I know haven't had sex for years." Maria Bello: sage. It's no secret that sex eventually fades, and what's more important is to partner up with someone whom you could honestly call your best friend.

5. "Though the form of our relationship changes, the love is always the same."

Throughout her book, Bello writes lovingly of her partner, Munn. But she's also consistent in her message that changing relationship and identity labels is often inevitable. That's OK, as long as the main focus is always brought back to love. This way, the odds are better that couples will grow together rather than apart.

Bello doesn't expect her partner to make all her problems go away, nor "make her whole," as the clichés go. She told the Daily Beast that our society's tendency to romanticize relationships and encourage people to look for their "missing halves" is damaging. Between this and Elizabeth Banks' recent comments to Allure, we're thrilled more people are finally calling bullshit on the idealized concept of "soul mates."

7. "Whether you're lesbian or gay or bi or transgender or whatever ... love is love."

OK, so this one was said by Bello's son, Jackson. But it's the statement that inspired Bello's viral essay, moving memoir and full-out activism campaign. While the phrase "love is love" might be written off by some as trite cliché, it's pretty awesome that a 12-year-old was able to use it to inspire his sexually fluid mother to share her story and spark a necessary conversation about the narrow labels holding us — and our relationships — back.

Next time you feel pressure to define yourself or your relationship, say it with us: What. Ever.