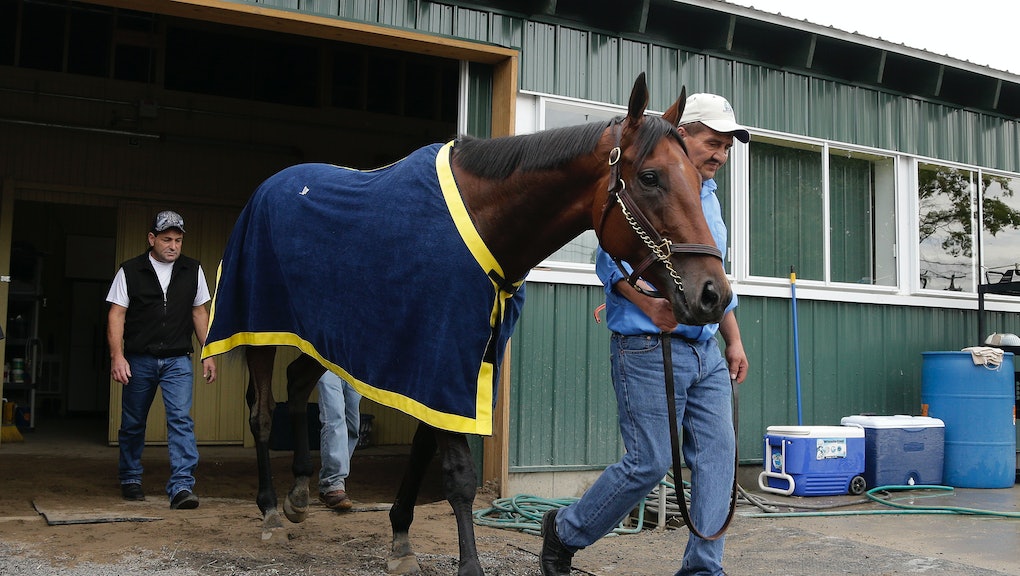 The Dark Side of U.S. Horse Racing You Won't Hear About on Television

With his victory in the Kentucky Derby and the Preakness, all eyes are on fixed on racehorse American Pharoah, and whether the thoroughbred and his jockey Victor Espinoza will be able to repeat their performance at the Belmont Stakes on Saturday. A triumph there would make American Pharoah the first horse to win the sport's Triple Crown since 1978.

Lost in the adulation of the winner's circle, however, were the extreme steps Espinoza took to get there. Though it's an easily overlooked aspect of the sport, whipping the horses mid-race is a subtle but nevertheless painful form of animal abuse that's all but ignored in the U.S.

For example, to secure American Pharoah's one-length victory at the Derby, video shows, during the race's final stretch, Espinoza cracked the lash more than 30 times. Even racing veterans were surprised by the number.

Despite its less than positive associations, the racing whip's official purpose is for "safety, correction and encouragement," according to guidelines issued by the U.S.-based Association of Racing Commissioners International.

But as the Wall Street Journal pointed out, the point at which encouragement ends and animal cruelty begins can often be vague. Most U.S. states relying on qualitative measures to determine acceptable behavior. Kentucky, for example, does not impose official limits on whipping.

Another way. The U.S. approach contrasts sharply with that of another horse race-loving country, the United Kingdom, which holds races somewhere almost every day. There, strict rules govern the use of whipping.

"It certainly wouldn't be allowed over here," Paul Struthers, chief executive of the U.K.'s Professional Jockeys Association, told Mic of Espinoza's excessive whipping. "Certainly the view of jockeys over here is that you wouldn't need to hit the horse that many times, nor would our jockeys want to."

Unlike the U.S., the U.K. employs a mandatory and uniform quantitative system covering whip use. According to the Jockeys Association website, the whip can only be used seven times during a flat race, or a race on level ground, and eight times during a jumps race, or one where the horse needs to clear heights.

All races are manned by official race horse stewards, who watch U.K. races live and then analyze video of footage to determine if jockeys have transgressed whipping rules. Jockeys in violation are summoned by the stewards to explain their behavior, at which point the stewards can decide what, if any, action to take. Whipping beyond the official quota can result in suspensions of days or even months and fines of jockey winnings.

"The penalties over here are pretty brutal," Struthers told Mic.

The U.K. also maintains strict regulations on the type of whip used. Jockeys use a specialized whip made with fiberglass and a cushion on the end. Designed by animal welfare enthusiast Jim Mahon, the tool was described by British sports journalist John Oaksey as "the kindest kid-glove aid for all riders."

"I have certainly seen some of the whips they use in America, and they are certainly not as kind to horses as the whips we use over here," Struthers told Mic.

While a few slaps of a whip might seem like nothing more than a minor nuisance to a 1,200-pound horse, it's still an all too easily overlooked form of animal abuse that no creature should have to endure, especially if there is another way. As the U.K. has shown, when it comes to hose racing, there is another way.

The United Kingdom adopted their system in 2011 and 2012 after outcry over various high-profile whipping incidents led to an official review by the British Horseracing Authority. If Victor Espinoza manages to beat American Pharoah into racing history, a similar review in the United States would be the real victory.