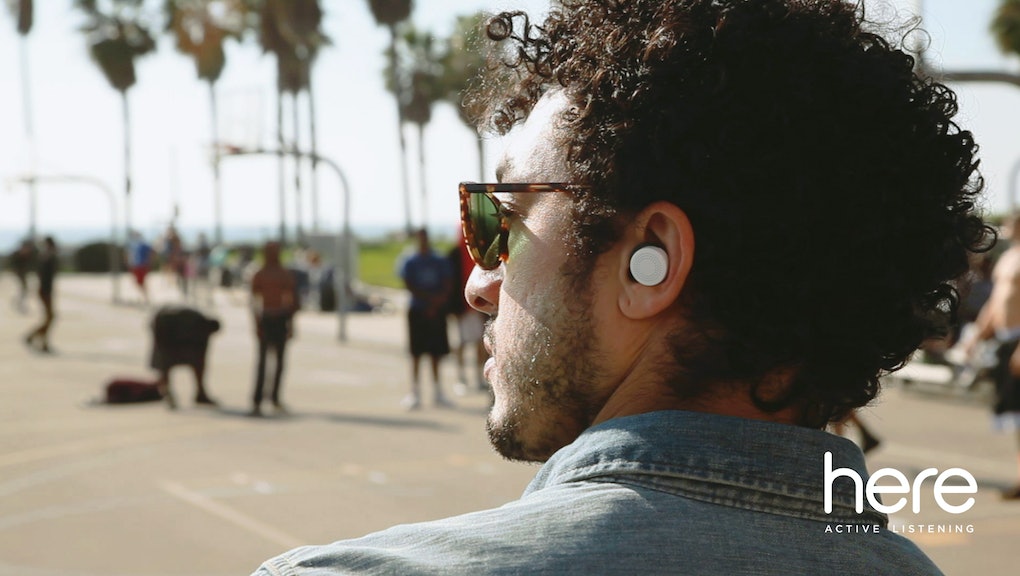 This New Earbud Changes How You Hear and It Made $250,000 on Kickstarter in 2 Days

A company called Doppler Labs just finished the prototype for an incredible new technology that has the potential to change live concerts and even the way we hear the world. It's called Here Active Listening, and it's a wireless earbud that, instead of playing music, lets you control the sound of the world around you.

The "Here bud" connects to a smartphone app that gives you the power to actually turn down the volume on the world. If that's not enough, the buds also feature a live music equalizer where you can adjust the settings — bass, treble, mid — of real-time audio, like a live concert. Its implications are astounding, and people online are going wild for it. Within just two days, they reached their quarter-million-dollar goal on Kickstarter. Soon, the Here bud may be a big part of how we interact with the world.

How it works: As external audio hits the Here buds, its outward-facing microphone picks up the sound. Technology within the bud processes the sound waves using specific algorithms, then relays the audio into your ears, all in under 30 microseconds and with no perceivable lag.

They chose to go through Kickstarter in addition to traditional funding channels, as the CEO Noah Kraft told Mic, it encourages outside input.

"By opening ourselves up to a community, even in just the first two days, we've gotten some amazing ideas from music producers, sound engineers and software developers," Kraft said. "And for us, we really are trying to inspire a community of people to not only embrace this, but help us build it into truly something you want to wear."

How you use it: First, you charge up the Here buds on their portable charging station. Then, connect the wireless tech to your smartphone via Bluetooth. The charge on the current prototype lasts about six hours, which Kraft says is plenty of time for its intended purpose.

"Even though the core buds have [six hours of] battery life, the charging case that fits in your pocket holds an additional full two charges," he told Mic. "Part of the reason we're not that concerned about the battery life is we're not trying to say this is a thing to wear all day, every day." He adds that, as the product improves, the battery life will improve with it.

The smartphone app, which will be available on iOS and Android, features a volume control knob that Doppler Labs calls a "remote control for your ears." The app also has an equalizer to adjust settings, and effects, which are essentially like Instagram filters for audio that you apply in real-time. The app also has preset listening settings, like Live Music, Airplane, Office and City. And if you are so inclined, Kraft said, they just introduced a new feature that will allow you to save presets.

"That's a huge one for us," he said. "If you think of the implications of that, let's say you go to the same restaurant every week, you just literally walk in, hit one button, done."

When asked whether the Here bud has the potential to just be another technology that distracts from a real-life situation, Kraft said he's thought it through.

"I'm a complete purist and music nut," Kraft told Mic. "And part of the reason we felt comfortable with this is because by its nature, live experiences are imperfect, because every single one of them are different. Before we launched this project we talked to dozens upon dozens of the top musicians and producers to really make sure everyone was on board. And the overwhelming feedback is, 'We hate going to a show and being at the whims of the guy behind the board,' especially those bands that are just starting out and they don't have the power to do a three-hour room check."

"We're pretty elated and humbled by the fact that we put out this completely new idea about audio technology that's gotten such a warm embrace," Kraft said of meeting their Kickstarter goal so quickly. "It's incredibly encouraging for us because we are putting a totally new concept out in the world, and so far the response has been overwhelmingly positive and we're very grateful for that."

Kraft says they plan on releasing the Here bud to market before the end of 2015.