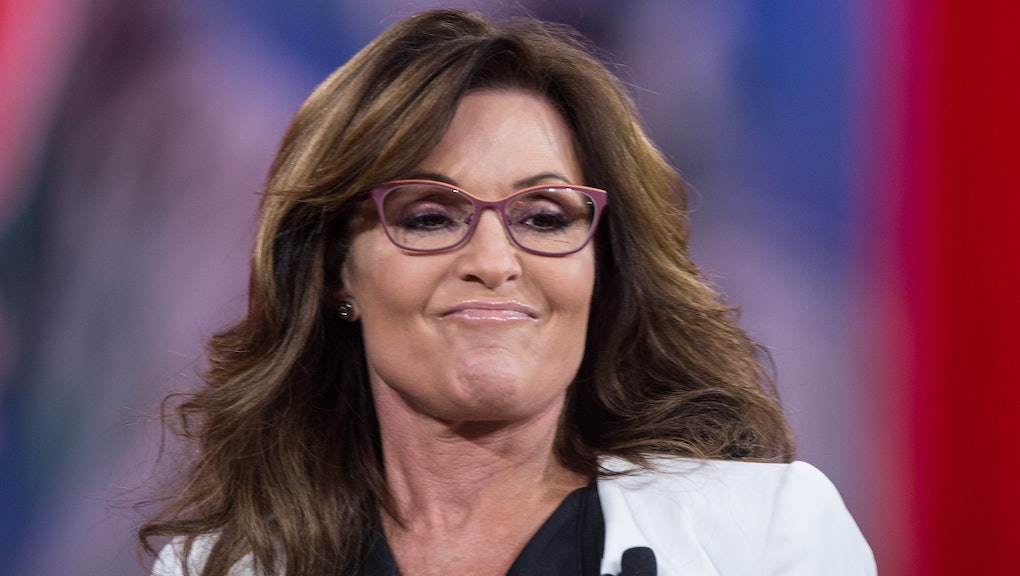 Former Alaska governor and 2008 vice presidential candidate Sarah Palin took to Facebook on Thursday to make aggressive remarks about the left-wing media's conspiratorial double standards for not treating Lena Dunham as a pedophile in the same way it has Josh Duggar.

She began by addressing Dunham, writing, "YOU PEDOPHILE, YOU."

"I'm not defending the Duggar boy's obvious wrongdoing over a decade ago ... but I'm sickened that the media gives their chosen ones a pass for any behavior as long as they share their left-wing politics," Palin writes in the post. "Case in point, they suggest Lena Dunham's sexual assault on her sibling is cute, and she's rewarded for it with fame and fortune. Meanwhile, they crucify another, along with an entire family."

Palin then called on the public to shift the discourse away from blaming Duggar to attacking Dunham and blaming the law enforcement official who leaked the legal documents which triggered the furor, "to go after her or him for illegalities and for destroying the public's trust in law enforcement."

"The media's hell-bent mission to go after the entire Duggar family for one member's wrongdoing, while giving a total pass to perverted actions of someone like Lena Dunham — or any other left-winger celeb caught doing awful things," she writes.

The former governor concludes by offering empathy and compassion to conservative victims of America's radical liberal agenda: "I hate for anyone to go through this game liberals are allowed to play, relentlessly attacking on an uneven playing field until a conservative's career, relationships and reputation are destroyed."

The background: Duggar, a star of the TLC show 19 Kids and Counting, has become the subject of national media attention in recent weeks when it leaked that he molested his sisters while they were sleeping years ago while he was a teenager. The frenzy intensified when his parents came to his defense.

Dunham has long aggravated conservative media figures. She came especially under fire in November for passages in her memoir in which she recalled opening her then-1-year-old sister's vagina when she was 7 out of uncontainable curiosity, only to discover pebbles which her toddler sister had inserted inside herself. She also tried to encourage her younger sister to kiss in exchange for sweets.

"Basically, anything a sexual predator might do to woo a small suburban girl, I was trying," Dunham writes. Dunham's sister, Grace, took to Twitter to defend Lena, saying the frenzy was driven by a heteronormative narrative. Dunham's supporters contend likening herself to a "sexual predator" exemplifies the dry and sarcastic comedy she is known for through her show Girls.

While Palin does raise some important questions about how society treats same-gender molestation versus heterosexual molestation, she undermines her argument by being so reductive and, chiefly, by arguing Lena Dunham and Duggar are one and the same. The conversation is far more complicated and nuanced, with Grace Dunham's response regarding heteronormativity just one complicating factor. Either way, attempting to divert the spotlight away from Duggar by attacking the officer, who leaked the documents, and Dunham, who isn't even involved, misses the real point that Josh Duggar did something inexcusable.