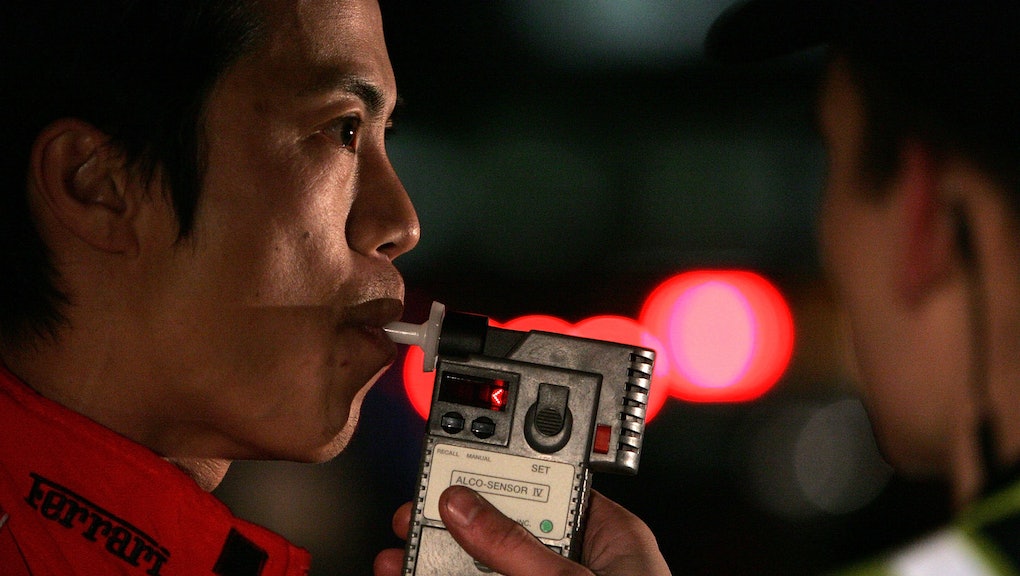 On Thursday, the National Highway Traffic Safety Administration announced a groundbreaking new development that, if successful, could virtually eliminate drunk driving — and the roughly 10,000 deaths it causes every year.

Driver Alcohol Detection System for Safety technology. It's a research project jointly managed by the federal government and private industry, and would equip cars of the future to measure the blood alcohol content of drivers before he or she starts the car. Instead of requiring the driver to breath into a built-in breathalyzer, the system would analyze the driver's blood alcohol content passively, either by touch or normal breathing. If the driver's blood alcohol level is above the legal limit, the car will not start.

"DADSS has enormous potential to prevent drunk driving in specific populations such as teen drivers and commercial fleets, and making it an option available to vehicle owners would provide a powerful new tool in the battle against drunk driving deaths," NHTSA administrator Mark Rosekind said in a press release.

The technology, which remains preliminary, garnered wide support with statements of praise from Mothers Against Drunk Driving president Colleen Sheehey-Church and Alliance of Automobile Manufacturers VP of Safety and Harmonization Robert Strassburger. If all goes according to plan, the NHTSA says the technology will be ready for commercial use in five years.

But not so fast. A major voice of dissent, however, came from the American Beverage Institute, a restaurant trade group, which opposes the mass introduction of the new technology.

"We don't have an objection to this technology per se," managing director Sarah Longwell told Mic. Longwell stressed that the organization felt it was more appropriate to target known offenders rather than the population at large, "[MADD] wants to expand the universe of people they want to target. ... We believe that's the wrong approach."

One of the kinks Longwell pointed out was machine error in properly measuring a driver's blood alcohol content. "Blood alcohol content is not static," she said. As Longwell noted, alcohol affects different people at different rates, so that last shot at the bar might take 10 or 20 minutes to raise someone's BAC past the allowed .08 level. Someone could start driving only to have their body process the liquor mid-drive.

DADSS engineers, however, were confident bugs like that could be worked out. "It won't suddenly stop," DADSS Program and Technical Manager Bud Zaouk told Mic. "There are certain things that will happen in a sequence to get it to a safe location." Zaouk refused to comment on what that sequence might look like saying any attempt to do so would be "speculation."

Longwell also argued that if the system became a mandatory safety feature, it would be unfair to force the entire U.S. driving population to pay for it. The Washington Post estimated the sensors would ultimately cost about $150 to $200 per vehicle. In a statement to Mic, the NHTSA dismissed the possibility, saying it "believes that benefits from the new technology can be achieved through a voluntary, market-driven approach."

What is clear, however, is that something should be done. In 2013, the Centers for Disease Control and Prevention reported 10,076 people were killed in alcohol-related crashes. The figure accounted for almost one-third of total driving fatalities in the U.S. that year. The same report found the annual cost of alcohol-related accidents in the U.S. to be north of $59 billion. DADSS sensors probably have more than a few bugs to still work out, but anything that can help bring those grim numbers down needs to be explored right now.