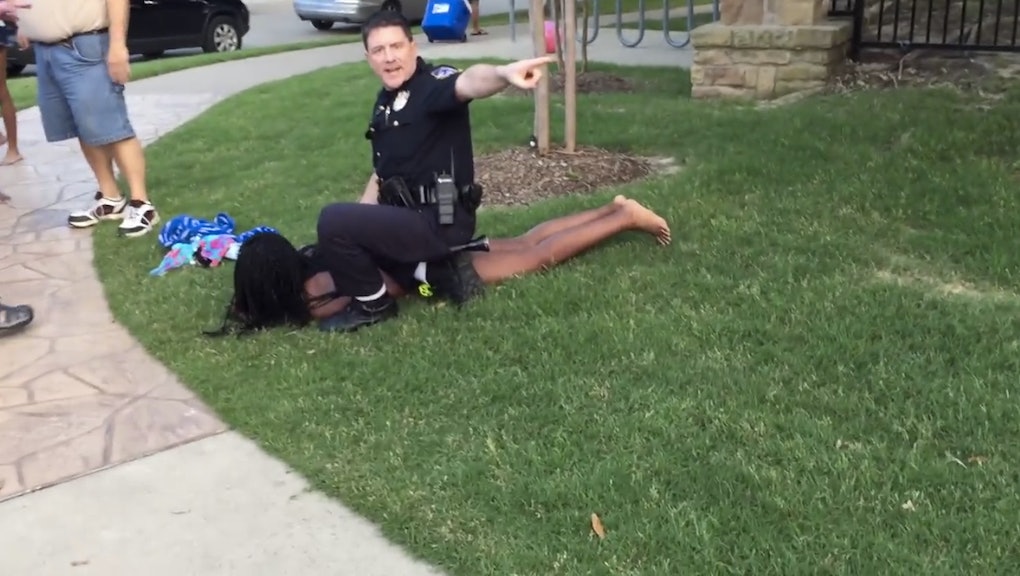 Galling video footage has captured a police officer in McKinney, Texas, rounding up a group of black teenagers, using excessive force on them and pulling a weapon on bystanders after an "incident" was reported at a local pool.

In a post on the McKinney Police Department's Facebook page, the department explained that law enforcement responded to "a disturbance at the Craig Ranch North Community Pool. The initial call came in as a disturbance involving multiple juveniles at the location, who do not live in the area or have permission to be there, refusing to leave. ... First responding officers encountered a large crowd that refused to comply with police commands."

But local resident Brandon Brooks, who filmed the incident, told BuzzFeed News that the police were summoned because "a bunch of white parents were angry that a bunch of black kids who don't live in the neighborhood were in the pool." What happened next is a brutal look at just how quickly an encounter with police can turn nasty, particularly when the suspect happens to be black.

Near the beginning of the video, one of the officers can be seen doing a ridiculous barrel roll while chasing the pool crashers, who fled when police arrived.

As another officer thanks one of the bystanders for returning a dropped item of equipment and cautions them not to run from the police, what appears to be the same barrel-rolling officer immediately returns and begins screaming in the children's faces. Immediately escalating the situation his colleague was resolving, he orders all of them onto the grass and shoves one child into the ground. He swears profusely the whole time.

"Get your asses out of here!" the officer yells at a group of bystanders, some of whom don't seem to know why the police are there.

He begins cuffing them as one of the kids insists, "Sir, we just came for a birthday party, please!" Then he continues to swear at them, before threatening random bystanders with the same treatment.

He grabs one of the bystanders, a young girl, throwing her to the ground. As another bystander walks up, he draws a pistol and his colleagues, by now alarmed, rush in for what could only be described as an attempt to prevent him from murdering someone in a fit of rage.

It's not over. The assault continues, with the officer throwing the girl back to the ground and pinning her while repeatedly threatening everyone watching with arrest.

The other officers involved just stare, at times looking like they are afraid of their colleague. Eventually, one of them un-handcuffs the girl who was tackled. Afterwards, the policeman continues to lecture the remaining kids about not running from law enforcement, telling them that they were in "trouble" now despite not committing any kind of crime.

According to local news station WFAA, the McKinney police officer seen in the video has been suspended until the completion of an investigation into the incident. WFAA says that the young girl seen being pinned in the video is 14 years old, with Police Chief Greg Conley telling media that "she was ultimately released to her parents."

As the Daily Banter's Bob Cesca points out, Brooks was never accosted in any way while filming. He also happens to be white.

Another Twitter user pointed out that the white bikers arrested en masse following a recent nine-person massacre in Waco, Texas, around 130 miles away, hardly received the same aggressive treatment during their arrests.

Teenagers present told BuzzFeed News that the original police call was placed after a local woman made racist comments, telling the black kids to return to their "Section 8 Housing." The resulting fight was caught in part on video.

Watch the whole video below: