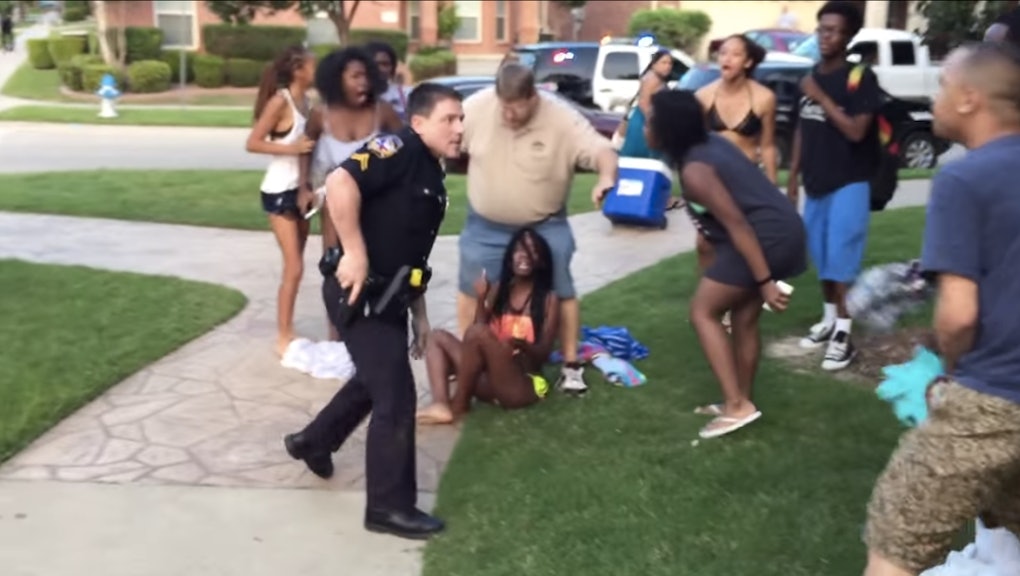 On Sunday, footage of white police officers marshaling black teenagers at a pool party in McKinney, Texas, went viral after one of the officers became physically and verbally violent. The video show police targeting only non-white teenagers.

"Everyone who was getting put on the ground was black, Mexican, Arabic. [The cop] didn't even look at me. It was kind of like I was invisible," Brandon Brooks, the 15-year-old white boy who filmed the event, told BuzzFeed News. "I think a bunch of white parents were angry that a bunch of black kids who don't live in the neighborhood were in the pool."

Outraged Americans took to Twitter to express their disgust at yet another example of racially motivated police brutality in the country, and to expose the hypocrisy of the police officers' behavior as compared to how they've been known to treat white suspects.

There are some of the best tweets that encapsulate how unacceptable the event was.

The McKinney Police Department posted a statement to Facebook after the incident went viral and explained to what the police were responding. "The initial call came in as a disturbance involving multiple juveniles at the location, who do not live in the area or have permission to be there, refusing to leave," it reads.

The officer's excessive force and pulling a gun on unarmed teenagers in broad daylight raise a number of alarming questions. For now, he has been put on administrative leave, but many are calling for criminal charges to brought against him.

However, the wave of racially motivated police brutality has not abated in the past 18 months. Victims like Freddie Gray and Michael Brown are just two high-profile examples of numerous black people who have been shot by police officers or been subjected to physical and verbal abuse. In most cases, officers have either been acquitted, exonerated by a grand jury or not received criminal charges at all. As this trend continues, it becomes increasingly difficult to ignore what appears to be a larger systemic problem of institutionalized racism being insufficiently addressed.

Every time a new story of police brutality breaks, outraged Americans hope it will offer the much-awaited tipping point to demanding an end to racism. Maybe this most recent incident will finally be it.