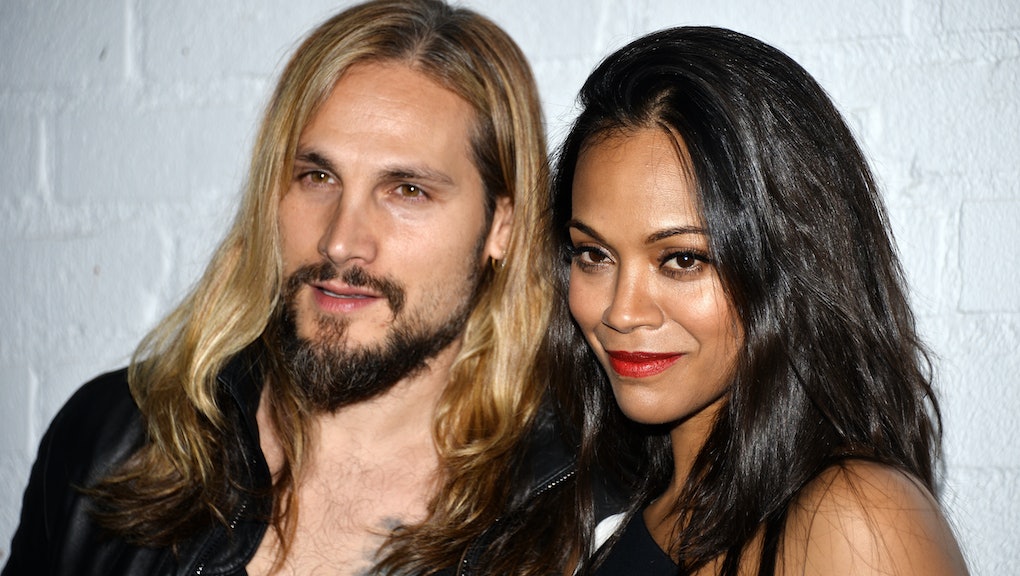 Marriage is getting more progressive by the day: Couples are opting for wedding tattoos in lieu of rings, bright-colored wedding dresses rather than traditional white and getting engaged with mutual proposals instead of the heteronormative man-on-a-knee. One tradition that's still hanging on? Women taking their husbands' last names.

So when Zoë Saldana's husband Marco Perego decided to take her last name after marriage, she was initially shocked.

"I tried to talk him out of it," Saldana told InStyle in the July 2015 issue. "'If you use my name, you're going to be emasculated by your community of artists, by your Latin community of men, by the world.'"

But Mr. Saldana (as Perego is now called) wasn't spooked by those repercussions and purposefully took on his wife's name. "Ah, Zoë, I don't give a shit," Perego had said at the time, according to Refinery29.

Almost unheard of: Even men with less riding on their famous names aren't taking the plunge. A 2009 survey conducted by Indiana University found that 71% of American men and women believe it's "better" for a woman to take her husband's last name in marriage, while a whopping 50% say that it should even be a legal requirement.

A 2013 Women's Health survey of Men's Health's male readers found that 63.3% of men would be upset if their wives kept their maiden names, while 96.3% of men said they wouldn't take their wife's last name if they were asked.

"Call it pride or ego, whatever. It's not happening," one anonymous respondent told Women's Health.

"That's just not manly to me," another replied.

There are men who buck the tradition. Jack White took on his now ex-wife's last name as his own (the rocker was born John Gillis), while the likes of John Lennon and Jay Z (now Shawn Knowles-Carter) added their wives' last names alongside their own. But upending tradition, as countless surveys have shown, is still rare among men — and women.

A default, not a decisive choice: Many millennial women are changing their names not based on some ideological preference, but seemingly by default. In other words, resorting to the traditions their mothers overthrew with Second Wave feminism. The data makes it clear: In the 1990s, 23% of women kept their maiden names, while in 2011 that number shrank to 8%, according to New York magazine.

Even Beyoncé Knowles and Jessica Biel, cultural paragons of feminism who rode to fame with their maiden names, took up their husband's surnames when they married.

Plenty of young women seem nonchalant about the return to tradition, viewing the decision as one of convenience rather than principle. When Mic asked Elise*, 26, if she planned to change her name, she quickly said, "Hell yes ... unless it's worse than my current last name." For other women, it's subject to change based on career. "I'm early enough in my career that it is not a huge shift to make with my contacts and connections," Sarah*, 27, told Mic.

But, she added, "that is definitely a secondary concern in my decision-making process. ... If I do not [change my name], it will be mostly attached to identity."

What we give up with our names: The tradition of women changing their names is ultimately rooted in notions of property and ownership, something some women find troubling. "This isn't just about taking or keeping names," Jezebel's Lindy West wrote. "This is about 'letting' your wife be her own person — with or without her maiden name."

Changing a name is, in many ways, a change of identity. We associate our names with our heritage, family, childhood, career and even our personal brands. Switching over when we sign a marriage certificate is saying goodbye to one aspect of our life and adopting a new identity; in heterosexual marriages, that often means sharing one with a man.

"I just feel like I'd be betraying the principles that define my life if I took a man's name," Samantha, 26, told Mic. "It's important for me to have my own sense of self in a relationship."

For Danielle, 30, who has been married, keeping her last name was never a question. "I was never going to change my name, because it is part of my identity. People hear my last name and automatically know something about my heritage."

"I will definitely not change my name. I've had this name for my whole life and I don't understand why that would change just because I decided to join someone in marriage," Audrey, 25, told Mic. "I think it would make sense if both people went hyphenated, because that doesn't have the weird ownership implications. So, if we both changed our names that would feel fair. But I don't know any man who has done that."

Investing in the relationship: Those strong-willed notions, however, seem rarer and rarer these days, as the data keeps showing.

Perhaps one alternative to women being the default name-changer, then, is to accept name-changing but take gender out of the decision-making process, as the Atlantic's William Macaskill argued: "Why not go with whichever name sounds better? Or which name is associated with the coolest people?"

Susan, 30, who has been married for five years, agreed. Her husband ended up taking her last name because it sounded better than his own. The decision ultimately came down not to gender, tradition or values, but what seemed best for them as a couple.

Which is why Mr. Saldana's decision, though rare, is one more men should seriously consider. When it comes to building a future with someone, forming an identity should never be about giving up your own.