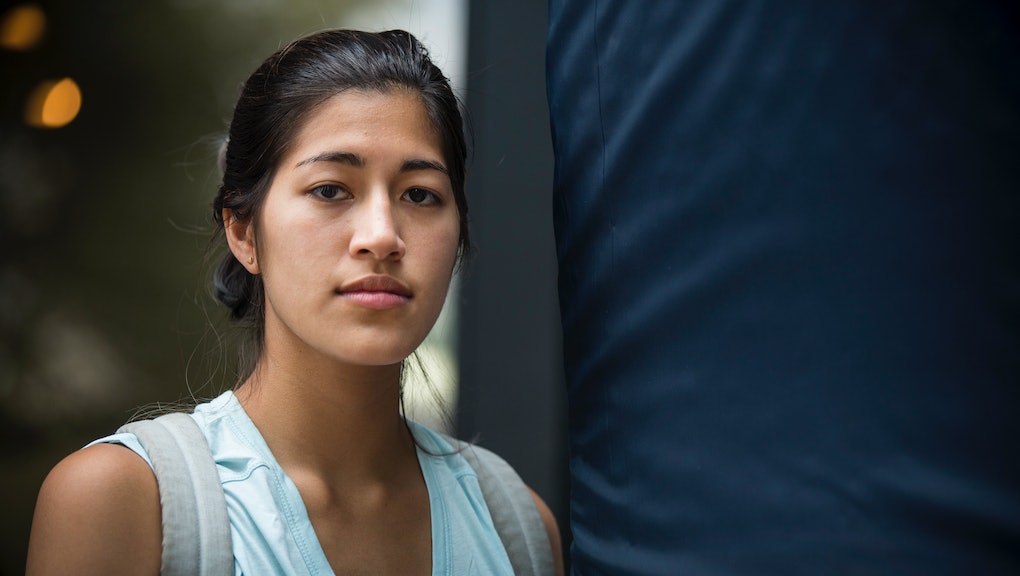 Emma Sulkowicz Isn't the Only Artist Taking on Sexual Assault. Here Are 5 Others

On Friday, performance artist Emma Sulkowicz released her latest project, a video titled Ceci N'est Pas Un Viol ("This Is Not a Rape"). The piece depicts a seemingly consensual sexual encounter that devolves into assault — but the video doesn't stand alone.

"Do not watch this video if your motives would upset me, my desires are unclear to you, or my nuances are indecipherable," Sulkowicz wrote in a statement accompanying the piece. "If you watch this video without my consent, then I hope you reflect on your reasons for objectifying me and participating in my rape, for, in that case, you were the one who couldn't resist the urge to make Ceci N'est Pas Un Viol about what you wanted to make it about: rape."

Sulkowicz's take on consent, assault and public interpretation predictably received backlash. The commenters on the video's website alone, for example, doubted, shamed and blatantly insulted the artist, Fusion reported. But beyond these denigrating responses, Sulkowicz's violent, graphic video was also unsettling for her supporters, leading some to question the validity of performance art generally when it comes to sexual assault, as well as Sulkowicz's contributions to the anti-sexual assault movement at large.

It's a question certainly up for debate, and one with no clear answer. But one thing is certain: Just as Sulkowicz cannot represent all survivors, her art and personal response cannot represent all artistic and/or personal responses to the experience of assault. Sulkowicz's video is inherently subjective: It may offend and deeply disturb some and resonate with and benefit others. But it cannot and does not stand alone.

It's crucial to acknowledge the many other artists uniquely addressing this subject matter. Here are just a few who have done and continue to do so.

In 1965, Ono performed "Cut Piece" in New York: She sat on a stage and invited people from the audience to cut pieces of cloth from her dress. They do so timidly at first, but their actions escalate until a member cuts Ono's bra straps. The piece calls women's sexual objectification into question and used "the female body as a medium for art and protest," according to W magazine.

In 1969, Ono created a 77-minute documentary titled Rape, in which Ono hired a male cameraman to pursue a young woman through the streets of London. The woman, Eva Majlath, was unaware of the filmmaker's intent, although Ono consulted with the subject's sister to arrange the shoot. Majlath — who spoke little English and lived in the country illegally — ends up at her sister's apartment, terrified and hiding from her pursuer.

The film, Joan Hawkins assesses in her book, Cutting Edge: Art-Horror and the Horrific Avant-garde, highlights the intimidating gaze under which women constantly find themselves. This normalized, "easy terrorization of women," Hawkins wrote, was integral to the film process itself as, Ono correctly predicted, the female subject would not retaliate.

Though her work doesn't directly confront sexual assault, Abramovic is undeniably a pioneer in performance art centered on ideas of embodiment, consent and violence.

In 1974, Abramovic engaged in a project called  "Rhythm 0," in which she put 72 objects on a table and instructed public viewers, "I am an object, you can do whatever you want to do with me and I will take every responsibility for six hours," she recalled in a Maria Abramovic Institute video. While some objects were mundane, like bread, others were lethal, like a pistol with one bullet. She emerged from the project alive, but not without physical injuries at the hands of her audience.

"There still are scars from where the people were cutting me," she told the Guardian of the experience. "They were taking the thorn from the rose and sticking it in my stomach. The public can kill you. This is what I wanted to see."

"There is nowhere to go except in yourself," she told the Guardian of that experience. "It was shocking. But how simple it was."

Performance art has certainly continued in the decades between these groundbreaking activists and Carry That Weight. In 2011, for example, performance artist and poet Caroline Rothstein staged a piece called 24 Hours of #Rape.

Rothstein, who is a survivor of sexual assault and rape, told Mic the project was "an opportunity to merge both the mishandling of sexual assault in the media and cultural dialogue at large through the textual aggregation of content, and a healing and cathartic opportunity for myself in the execution of the performance."

After a 2011 New York Times article, "Jailed Afghan Woman Freed but Urged to Marry Rapist" was tweeted repeatedly on Rothstein's newsfeed, she became curious as to how the hashtag #rape was being used. She searched "#rape," and aggregated every tweet made in 24 hours between Dec. 1 and 2, 2011. While some tweets were related to activist efforts or the news itself, "all too many were offensive, using "rape" carelessly and as a joke," she noted.

Days later on Dec. 4, 2011, while visiting her alma mater, the University of Pennsylvania, Rothstein recited the 21 pages of aggregated tweets in front of the dorm where she was raped as a freshman in 2002.

"The act of its taking place in front of the dorm, reclaiming that space and reclaiming social media amidst myriad systems of oppression and posts that perpetuate rape culture and sexual violence," felt important, Rothstein said.

A tricky component that plays into sexual assault now is how it relates with social media. Spoken word poet Kevin Kantor hauntingly addresses this problem in a piece titled "People You May Know" in which he recounts the experience of seeing his rapist show up as a suggested friend on Facebook.

"If nothing else, I hope people realize that the systems in place that work to shame and silence male survivors of sexual violence are the same ones that work to invalidate the voices all survivors: women, trans* people, gender non-conforming folk," Kantor told the Huffington Post. "I was asked why I, as a man, didn't 'fight back,' in a society that privileges and presupposes a dominant masculine identity. I believe one of the first steps in advocating for all survivors of sexual violence and abolishing our country's pervasive rape culture is championing the cause of gender equality."

Photographer Grace Brown launched the photography series, Project Unbreakable in 2011 to give a voice to sexual assault, child abuse and domestic violence survivors while increasing public awareness about the reality of those experiences.

"Project Unbreakable humanizes statistics," Brown told Mic in February. "It takes those numbers you hear (and forget about) and puts a face behind them and makes the issue a lot harder to ignore or shove under the rug." It also provides a healing function by giving a voice to survivors, she notes, by letting them have the final word and "say exactly what they want about their assault."

Ultimately, Emma Sulkowicz isn't an emblematic survivor. Her response, her art, her choices may speak to others and may resonate with some or offer release. But it is impossible that it can do so for all. It's crucial, therefore, to elevate a diverse array of survivors' voices, to recognize that there is no homogenous experience of survival nor single method or representation of recovery.