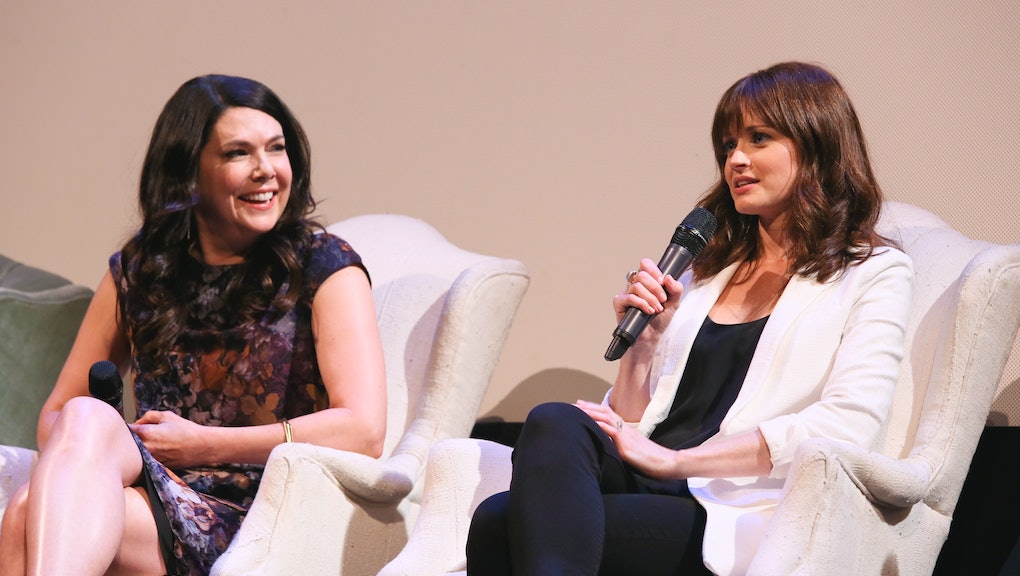 The Paramount Theater in Austin, Texas, has likely never seen a horde of fans as passionate as the one it saw Saturday night. Even before the Gilmore Girls cast reunited onstage, the audience was crawling over rows to snap photos of the actors filing into their seats. By the time Alexis Bledel, Lauren Graham, Kelly Bishop and series creator Amy Sherman-Palladino finally walked out, fans were losing their minds.

What kind of show could inspire such fan devotion? What is it about Gilmore Girls that inspired a cultural resurgence when the series hit Netflix in October? According to the actors themselves, it has a lot to do with Sherman-Palladino — and a bit with the fans themselves.

"I'm the reason she watches Gilmore Girls," fan Jessica Harper said of her younger sister, Elizabeth. The two were first in the reunion's general admission line, a position that required hours of waiting. As they told Mic, it would all be worth it for the chance to see the cast of the show they bonded over as sisters.

"I love the mother-daughter relationship," Jessica said of the Lorelai-Rory core of the show. "It was something I kind of wish I had with my mom."

Jessica reports a common sentiment: The bond between Lorelai and her daughter, Rory, was truly special on TV, and it hasn't quite been replaced since Gilmore Girls ended. Sherman-Palladino clearly wrote something that resonated with a predominantly female audience. Without her, the show wouldn't have worked.

"Amy's voice is unusual, and it's kinda magic," Liza Weil, who played Paris Gellar on Gilmore Girls and currently stars on How to Get Away with Murder, told Mic Sunday morning.

Weil also emphasized the scope of the show as special. "It is rare that there's stories on TV that are small," she said. "I think it is a really comforting thing for people to watch real people live their lives, and have small things happen to them that are profoundly emotional."

As Keiko Agena, the show's Lane Kim, noted in a Saturday interview, Sherman-Palladino had a special gift for writing female relationships even when they weren't familial ones. That, along with the smallness of the show, makes Gilmore Girls unparalleled in modern television. Yet chalking up Gilmore Girls' success to its role as a small WB show with passionate fans would be underselling some of its smartest attributes.

"There aren't as many shows where there are a lot of types of female interaction," Agena told Mic. "There's a little bit of a gap. ... A lot of the dramas now are so intense. They really push the envelope."

"There aren't as many shows where there are a lot of types of female interaction," Agena told Mic.

One look at those intense dramas Agena references — think Scandal or How to Get Away with Murder — and you'll see another major similarity: incredibly fast dialogue.

"It was a landmark in a way for many reasons, but one of them was the relationship with Alexis and Lauren," co-star Liz Torres (Miss Patty) told Mic. "They spoke so fast ... and then I come to find out that a lot of acting teachers and coaches and schools will use clips from the show, with Lauren and Alexis, and they say, 'This is the new television. You have to learn how to work this way.'"

In October, every episode of Gilmore Girls hit Netflix, inspiring a new wave of fans, podcasts, wars over Jess and Dean and more. Suddenly, what had been a cult favorite became a full-blown cultural phenomenon. Gilmore Girls was as big a TV story last year as the biggest new hits — including Weil's new show, How to Get Away with Murder.

"It's been a weird thing for me," the actress admitted. "When Gilmore Girls came on Netflix, I was working on a new show that was coming out around the same time. To have your past and your present in the world again at the same time was really wild." Despite the roles she's taken on since, she said her time as Paris inspires the most fan interaction: "Gilmore Girls is always the thing I get stopped for."

"When Gilmore Girls came on Netflix, I was working on a new show that was coming out around the same time," Weil said. "To have your past and your present in the world again at the same time was really wild."

For Jessica Harper, the fan waiting with her sister Elizabeth at the front of the line, the show's resurgence been a chance to watch the fanbase grow, too. "I liked that [Elizabeth's] friends who didn't have older siblings — she was introducing her friends who had never seen Gilmore Girls to the show," she said.

With the show on Netflix for the foreseeable future, the following will continue to grow. Though there's no plans for a revival yet, it's not hard to imagine one somewhere down the line. As was evident at the reunion, where there was plenty of shouting and interacting with the talent onstage, Gilmore Girls fans are passionate and vocal. Even the Gilmore matriarch herself knows it's inevitable: