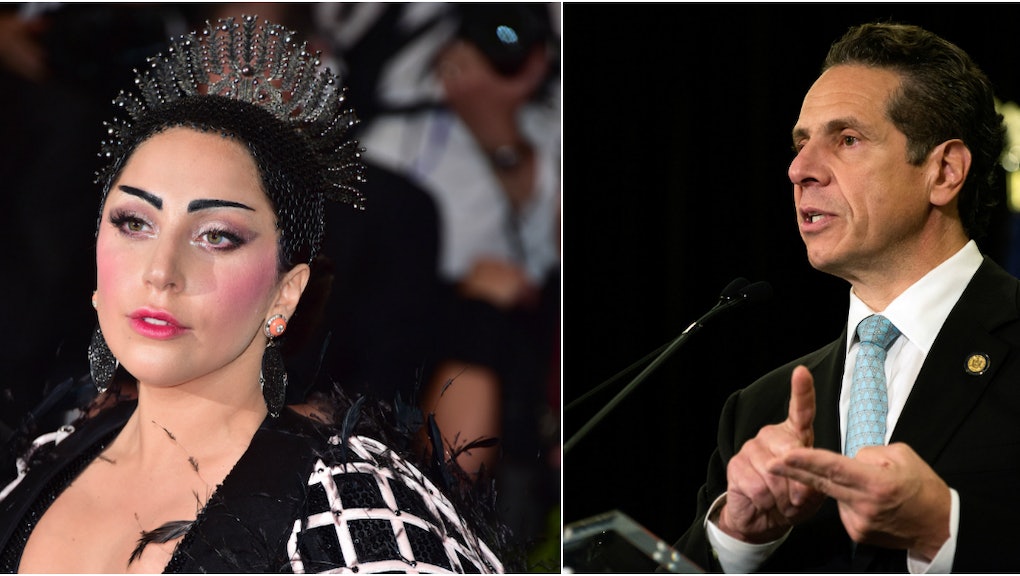 On Monday, New York Governor Andrew Cuomo teamed up with pop artist Lady Gaga to draw attention to the sexual assault epidemic currently taking place on American college campuses. The governor and the artist penned an essay on the governor's "Enough is Enough" bill. They shared it via Billboard.

Gaga is a fitting spokesperson to stand beside the governor for this campaign. As Billboard reports, in an interview with Howard Stern last December, she revealed that, when she was 19 years old, she was a victim of sexual assault. She wrote about the incident on her song "Swine" and on "Till It Happens to You," a song featured in the sexual assault documentary The Hunting Ground. This is yet another powerful display of support from Gaga.

Their piece confronts some of the confusion surrounding sexual assault statistics on campus and the ways schools generally respond to allegations of assault. "A 2010 investigation by the Center for Public Integrity found that just a quarter of the individuals responsible for sexual assault were permanently removed from campus," they write. "And in some cases, that figure was as low as 10%."

According to Cuomo and Gaga, schools are often tragically slow to prosecute sexual assaults and often openly discourage students from coming forward, as a way to avoid negative publicity. More than 95% of rapes on campus in New York go unreported to law enforcement.

The governor's bill will offer schools and students a clear definition of sexual consent and a "Sexual Violence Victim/Survivor Bill of Rights," which will inform students of their legal rights and access to appropriate resources. It will also introduce an amnesty policy that will protect victims from being disciplined if they were on drugs or alcohol at the time of a reported sexual assault.

"Quite simply," they write, "enough is enough."