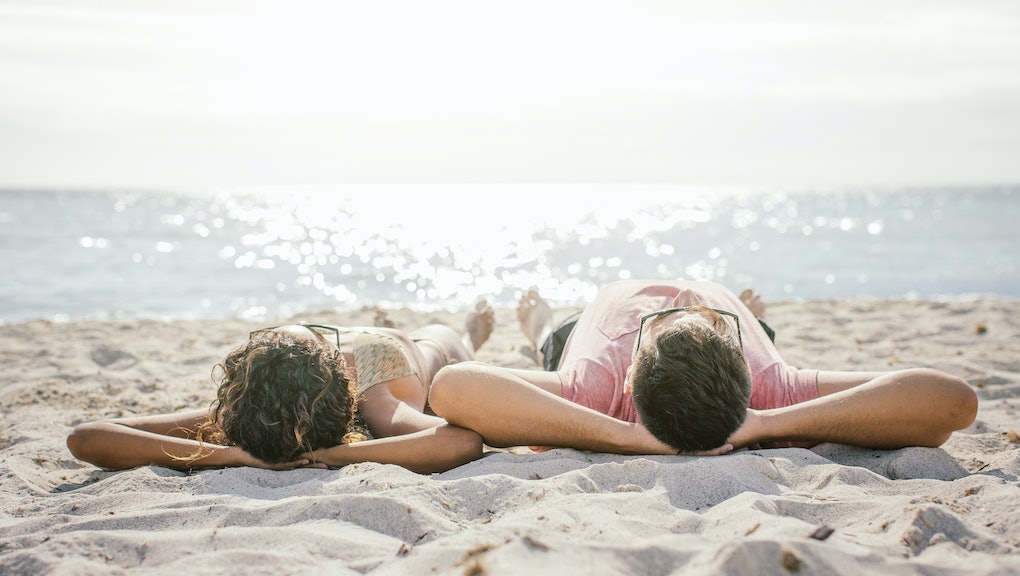 "I was a little tipsy and went skinny dipping with this dude I just met," recalled Natalie*, 30, to Mic. "We ended up having sex on the beach in the pitch dark. I woke up with sand in every crevice imaginable."

Sex on the beach — it's a cocktail, it's a Hollywood cliche, and it remains one of the most glorified aspects of a summer romance. There's something nostalgically enticing about limbs out in the sun, playful flirting in the ocean before a quickie in the dunes. The glorification is exacerbated by those tan bodies clogging our Instagram feeds, the legs of at least some of the 200 million millennials taking yearly vacations abroad.

But ask any person who has actually dared to drop their swimsuit and get busy, and you will learn that sex on the beach is far from it's cracked up to be.

"You picture fireworks on a beach blanket with the sunset in the background," Natalie said. "It never ends with a UTI. But my night did."

In short, it's just one more unrealistic sex expectation that leaves us feeling unfulfilled.

The vacation ruiner: "Hot fantasy, logistical nightmare" is how sex educator Kate McCombs described sex on the beach to Mic. A passion-filled evening can even turn into a felony when it's public. Last month, a Florida couple was sentenced to 15 years in prison and put on the state's sex offender registry after having a romp in broad daylight on the beach.

Absurdly harsh penalty aside, the couple serves as a cautionary tale. As Scott*, 25, told Mic, "You basically have an entire beach full of iPhones ready to catch you mid BJ."

"It might sound exciting, but it's not kind to have unsuspecting folks happen upon your public sex," added McCombs.

That kind of pressure (not to mention potential arrest) can be a major drawback. "Physiologically, arousal is a relaxation response. Unless the thrill of getting caught is your thing, your libido will benefit from eliminating those potentially vacation-ruining variables," McCombs said.

"I couldn't get over the fact that someone could see us," Mark*, 29 — who reports on his beach sex romp with regret — told Mic.

Less romance, more sand: Also killing the mood? The environment. As Scott put it, "sand is not an aphrodisiac."

"There is nothing sexy about sand in your coochie, pee hole, mouth, ears or any other area that's generally involved in sex, foreplay and kissing," Kat George wrote for Bustle. "Sex on the beach involves a lot of spitting sand out of your mouth and weird chafing, all of which is a real mood-killer."

So good luck with the limitations. "He took me out for a moonlit stroll and went down on me under the stars," Jade*, 22, told Mic. "But I wouldn't want to try penetrative sex for obvious reasons. Sand in uncomfortable places, much?"

It's also potentially unsafe. "Lake, river, ocean, and pond water all contain bacteria. Having sex can introduce that bacteria into your vagina, which could put you at risk for infections that you don't want up there," PopSugar's Tara Block said. In fact, a 2007 study found that the dangerous waterborne microbes that shut beaches down can be found that same sand you're rolling naked in.

Plus, when condoms come into contact with foreign bodies, they risk tearing, and condom companies don't test their products for salty or sandy conditions, a Durex spokesperson told LiveScience.

"A condom and sand are about as bad a combination as you could think of," Mark said. "Everything tends to be less wet in an ocean. If you get my drift."

Hot fantasy, logistical nightmare: Which is why the fantasy seemed past its prime. Like so many other sex expectations, the truth is that not everyone will find something pleasing about sex in the sand. Like shower sex, water beds and 69ing before it, sex in the sand is an idea pop culture would have us believe is the ideal. But the other side of the tide — the sand-lined vagina, broken condoms and possible spectators — so rarely make the Hollywood script. Luckily, there are romantic alternatives.

"If ocean waves rock your boat, try camping by the beach or stay at a hotel with ocean view rooms," McCombs said.