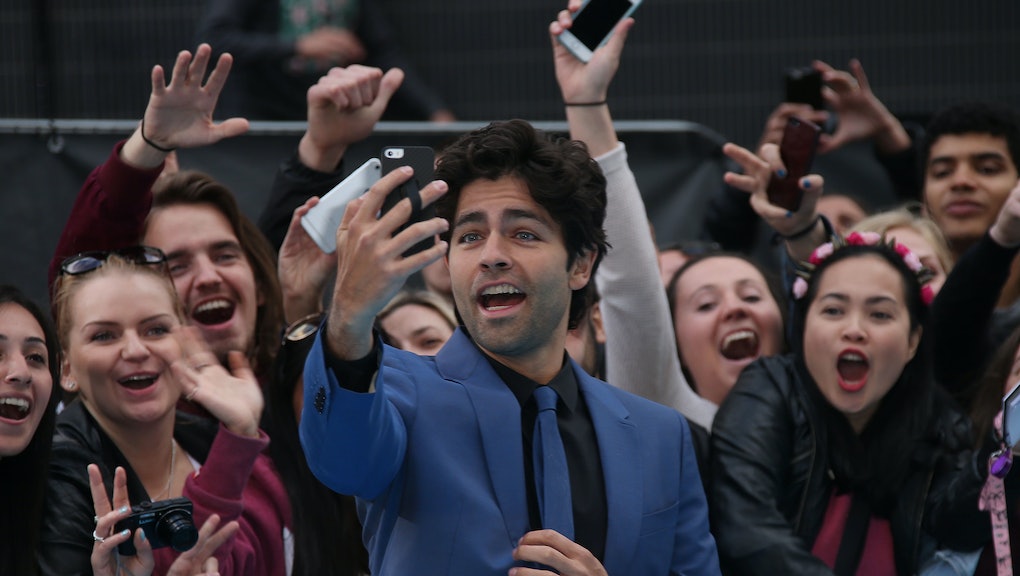 The day before the Entourage movie opened, star Adrian Grenier discovered something he apparently found to be unsettling: The people interested in seeing his new movie were mainly dudes.

It was written on the wall: Women weren't down to pay to watch Entourage. Grenier vigorously denied that Entourage is sexist, promising his Instagram followers, "There are strong female characters."

While almost ten thousand people liked his post, Entourage failed to attract many women, let alone many others, at the box office over the weekend. In total, Entourage collected $10.4 million in its opening weekend and just $17.8 million in the five days after its Wednesday premier, falling short of the $20 million Warner Bros. and HBO Films had reportedly hoped for, according to the Hollywood Reporter. It lost handily to Melissa McCarthy's female-led action-comedy Spy, which netted $30 million in its first weekend. It only makes sense women might not be too keen to see an Entourage film — in the eight seasons the show aired on HBO, women spoke to each other a total of eight and a half times, or about once per season, according to Racked. By standards as rudimentary as the Bechdel Test, this tradition doesn't exactly lend to "strong female characters."

Entourage is about four guys from Queens, New York, one of whom is an A-list actor and three of whom live off his success. In the film, Vinny, the A-lister (played by real-life C-lister Grenier), wants to direct a movie. His agent, Ari (Jeremy Piven), spends most of the movie convincing a Texas oil man (Billy Bob Thornton) and his neckbearded son (Haley Joel Osment) to continue financing the project. The other three main characters spend the movie chasing women and saying middle school boy things.

Bros on bros on bros: Unsurprisingly, about two-thirds of the Entourage movie's viewership this weekend was male. (American movie audiences are generally split 50/50.) This was evident in a Williamsburg, Brooklyn, theater on opening night, filled with bros accompanied by other bros; bros helping themselves to bros' popcorn; bros resting their shoes upon the seats of bros. When the lights dimmed and the opening credits came on, a bro in the back yelped, "Fuck yeah!" and took a photo with the flash on.

What transpired for the next 104 minutes set culture back maybe as many years. Here are seven reasons why it's great that the preteen boy fantasy flick that is Entourage failed so hard during opening weekend:

This line is delivered by 49-year-old grown man Kevin Dillon.

Sloan (Emmanuelle Chriqui) is one of the the only female characters from the TV show who made it into the movie. She manages this by carrying E's child, serving as the delivery system for the status of fatherhood, i.e. another reason for the bros to get drunk. When the baby is born, the guys assemble in the hospital waiting room — Sloan conveniently off-camera — to congratulate E on his new achievement. Cut to the guys at the Golden Globes, and the baby is never seen again.

3. The trailer is a big red flag

When a trailer has to rely on revealing nearly every cameo in the movie, it's usually a good sign the movie's going to be a clunker. Boasting about them before the movie even premieres is the opposite of how cameos should work. If you're curious how the movie makes use of such illustrious guests: Pharrell Williams is a deus ex machina 20 minutes into the movie, and Bob Saget asks the entourage to "fuck my daughter's friends so I don't have to."

"Retrograde" is a word several critics have latched onto, and not just because the Entourage movie is basically a very long episode of a TV show that ended in 2011. The movie is retrograde because its fundamental appeal — available exclusively to heterosexual men — is the fantasy of permanent bromance enjoyed through promiscuity and expenditure, complete with unlimited happy endings. The best thing in the world, Entourage proclaims, is to have your intercourse with a hot woman interrupted by an important and glamorous business phone call, which you take. Then you tell your bros about it.

6. The "no-homo" implications of Lloyd

Ari lists his gay Asian assistant, Lloyd, in his phone as "Gaysian." Ari's abuse of Lloyd matches Johnny Drama's lines on pure bigotry, but serves a different purpose. When nothing's fun unless the bros partake in it, when the most important thing isn't parenthood, success or personal wellbeing, but spending time with your bros, full stop, other bros might get ideas about what type of bromance you and your boys really have. Enter Ari's homophobia. On the hapless, openly gay Lloyd, Ari performs the psychologically necessary function of unloading the entourage's (and the audience's) sexual insecurities. Lloyd is a bro's caricature of a gay man, and a counterpoint to the entourage's undeniable only-wants-to-fuck-chicks-ness. Ari's pathological rudeness and homophobia allow bros to rest assured in their certified heterosexuality.

E, played by Kevin Connolly, is Vinny's manager. His main arc in the movie is to have sex with and sometimes impregnate beautiful women and, of course, to later be unresponsive to them. E has a one-night stand with a woman named Melanie (Sabina Gadecki) and the next day receives a phone call from her. He picks up, and the camera cuts to Melanie. Now, the filmmakers could have chosen literally anywhere in Los Angeles for Melanie to be calling from. We aren't told where she went after leaving E in the morning; we haven't been told what she does for a living or where she lives. Melanie could be anywhere in the massive urban sprawl doing absolutely anything during this shot: cleaning her apartment, driving her car, eating lunch. With all of these options, the filmmakers decide to put Melanie in a Bed, Bath and Beyond-like home goods stores, where she browses towels and silverware while she talks.

Like Justin Bieber and Nickelback, Entourage's hateability is a pop culture phenomenon in itself. But while some have called it the "hate-watching event of the summer," it's actually just boring. It's the kind of painful frustration felt by a camp counselor on a two-hour bus ride with sexually frustrated middle school boys. You don't watch the Entourage movie so much as stare at it.

Still, roughly 1.3 million Entourage tickets were sold this weekend. Excluding reviewers' tickets, this number is an indicator of how much progress there is left to make. A healthy and fair society is one in which Entourage is straight-to-DVD with only a few, deeply ironic, purchases.