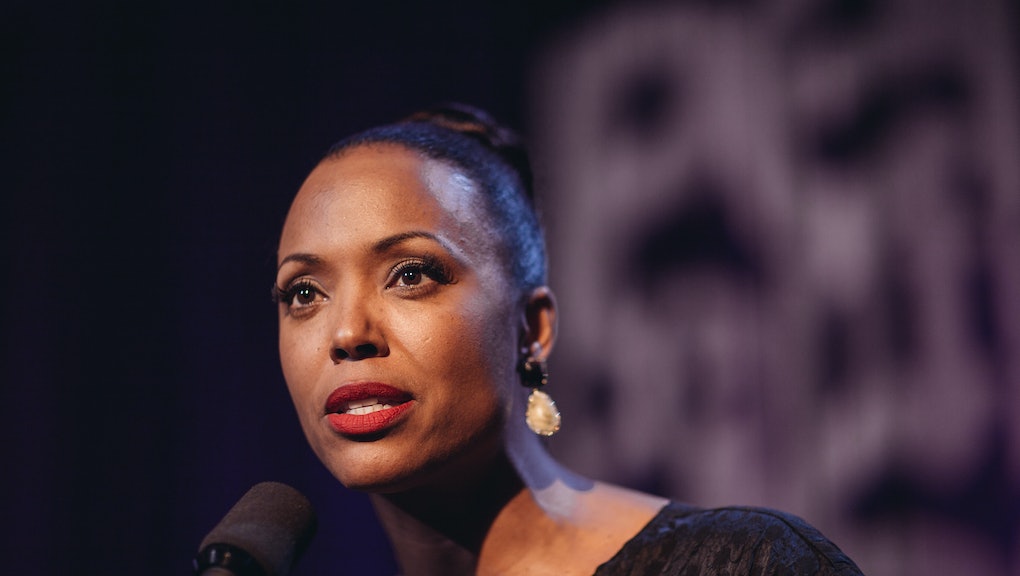 Actress Aisha Tyler is the latest Hollywood star to join thousands of LGBT-supporting social media users in pledging "I DO" – declaring her support for the nation's oldest legal organization dedicated to expanding LGBT civil rights and the continuing fight for marriage equality.

In a new video produced by Lambda Legal, Tyler personalizes the fight for marriage equality by highlighting the diversity of her own family and friends.

The issue is particularly resonant to the Archer star because of her own interracial marriage, a union that would have remained illegal in 13 states if the Supreme Court hadn't intervened in Loving vs. Virginia in 1967. It's a parallel to the marriage-equality movement that Tyler says is too conspicuous to ignore.

Tyler has no patience for arguments about same-sex unions violating the "sanctity of marriage" or "redefining" the institution:

That's why Tyler, co-host of the CBS daytime show The Talk and a longtime supporter of civil rights, is pairing up with Lambda Legal for its #IDO campaign. Although the battle for same-sex marriage — led in part by Lambda Legal — has concluded in many places, the rise of so-called "religious freedom restoration acts" pose a major threat to LGBT equality.

"We are seeing in different parts of the country a pushback where there's an effort to legalize discriminating against gay people around their marriage rights," Susan Sommer, senior counsel and director of constitutional litigation at Lambda Legal, told Mic in a previous interview. "We need to watch to make sure that religion is not being used as an excuse to withhold basic services in the public marketplace."

Just weeks before the Supreme Court is set to release its decision on Obergefell v. Hodges, the landmark case that could legalize same-sex marriage nationwide, Lambda Legal and Tyler are teaming up to finance those impending legal battles. In April, ahead of the Obergefell oral arguments before the Supreme Court, Lambda Legal board co-chair Karen K. Dixon and her wife Nan Schaffer pledged to donate one dollar for every use of the hashtag #IDo on social media, in a campaign that has raised more than $955,000 to date.

For her work on behalf of LGBT equality, Tyler is set to receive the Celebrity in the Spotlight Liberty Award at Lambda Legal's annual red carpet fundraising gala on June 11. "I am incredibly honored to be receiving this award," Tyler said in a statement to Mic. "I feel so fortunate to be able to advocate for LGBT rights and to fight for my family members, friends and people everywhere to live open, robust lives free from discrimination."

"At this pivotal moment in our community's fight for equality, with the U.S. Supreme Court poised to issue a decision on the freedom to marry for same-sex couples, we are proud to highlight and acknowledge those who have helped us to arrive here," said Rick Davis, Lambda Legal's western regional director, in the same statement. "We are confident that the Supreme Court will rule in our favor in June, but marriage equality is just one step in our journey, and we're proud to honor those who stand with us as our work continues on a range of issues."