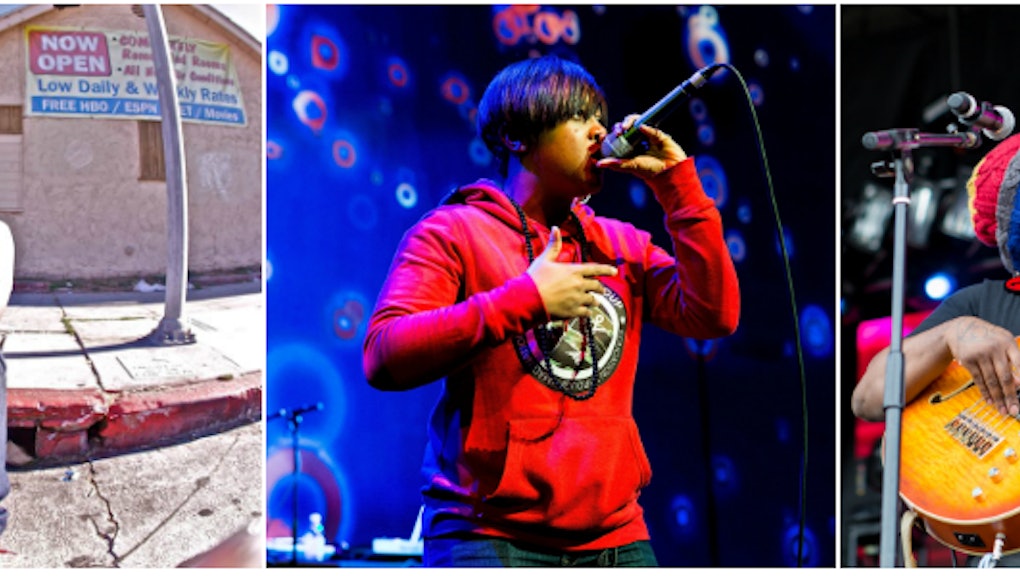 Kendrick Lamar's To Pimp a Butterfly is a masterpiece. Its elaborate genre-melding instrumentals and crisp songwriting redefined how chart-topping hip-hop records can sound didn't spring complete from the mind of a single man. It took a village — and all of the lesser-known musicians who helped create it are about to have huge moments in their own careers.

Aside from hip-hop icons like Dr. Dre, who executive produced; Snoop Dogg, who raps on "Institutionalized"; and Boi 1da, who brought us "The Blacker the Berry," most of the musicians helping Lamar didn't come from the hip-hop world. Virtuoso bassist Thundercat, pianist Robert Glasper, saxophonists Terrace Martin and Kamasi Washington are all earning their modern-day jazz icon status. Meanwhile, vocalists Anna Wise and Bilal both have burgeoning careers outside the hip-hop world.

All of these names worked closely with Lamar to make his album the mind-bending masterpiece it is. And now each one is taking their revolution beyond Butterfly. Here are the bold next steps they're taking:

Martin has been working with Lamar since the beginning, as a fresh signee to the indie label Top Dawg Entertainment. Martin has worked with Lamar on every project since; Martin helped lock down the incredible jazz musicians that Lamar tapped for Butterfly.

"Kendrick took a liking to the page that we had been on," Martin told Billboard, talking about the music he'd been making with Robert Glasper and Thundercat. "And was like, 'You know what? Let's make that page bigger with my influences and your influences, and let's do something that we all never did.'"

After engineering the collaborations, Martin is focusing on his own solo album. In an interview February with NPR, he said he's channeling '80s 808s jazz. He cited Grover Washington Jr.'s Grammy-winning fusion album Winelight and Najee's "Betcha Don't Know" as inspirations. "It was so gangster," Martin said. "All the dope dealers played this song."

Washington has been floating around the jazz and soul worlds for years. He's toured with artists like Lauryn Hill, Snoop Dogg and Raphael Saadiq, but he was always operating behind the scenes. Now, the string arrangements and sax parts he lent to Butterfly have put him on the map. Earlier this month when his three-hour album The Epic dropped, Pitchfork immediately awarded it its highest honor.

"For a long time, we did a lot of high-profile gigs and other musicians knew about us, but most people just ignored our music," Washington recently told LA Weekly. "We knew how good it was, and how much it resonated with people in L.A. But records from Kendrick and Flying Lotus and Thundercat and hopefully mine can open doors for jazz again.

"We're trying to make music with spirit behind it, with sincerity, freedom and no restrictions."

Bassist Stephen Bruner, aka Thundercat, was "pivotal" on Lamar's project, according to Martin. Thundercat has been a quiet but potent force in jazz and hip-hop for some time, but his star is rising in a major way. Since the record, Thundercat has become the public ambassador of psychedelic jazz and R&B. Though he hasn't cut a new album since 2013, he headlined the opening night of the Atlanta Jazz Festival in May. He also headlined the Red Bull Sound Select in Chicago and will headline the Low End Theory Festival in Los Angeles later this year.

But Thundercat doesn't see himself as a jazz savior. Instead, he feels the new attention that he and the other members of the band backing Lamar as proof that jazz "never left."

"Time isn't going to turn back to the 1940s, but [jazz] is supposed be part of your makeup," he told Creative Loafing. "So if we are the guys who are reintroducing that concept, then sure."

Wise has been working with Lamar since 2011. He found her on Soundcloud and the first time they met was "like love at first sight, but creatively," Wise told Billboard. She appeared on good kid m.A.A.d. city's "Real" and performs the hook of To Pimp a Butterfly's "Institutionalized" and "These Walls."

She released her own album with her band Sonnymoon, The Courage of Present Times, in March. It's radically different from To Pimp a Butterfly, an alternatingly serene and thundering indie pop surge that recalls the Dirty Projectors. But Wise doesn't see her work with Lamar as being all that different. "I don't really consider the genre — to me art is art, and I want to work with the greats," Wise told Billboard.

"We make art that is music," she said of her own band's sound, "and I think it requires a few listens to be able to appreciate it."

Though R&B vocalist Bilal got his start years ago working with the Soulquarians collective, which included artists like Questlove and Erykah Badu, he's continually operated under the radar. Today, he's riding a tremendous amount of press in advance of his new album thanks to his work on To Pimp a Butterfly. He sang several of the album's hooks, including "Institutionalized" and "These Walls," and singing backup on "u," "Hood Politics," "For Sale? (Interlude)" and "Momma."

"We're from the same bloodline — we think the same s**t is funky," Bilal told BET. "We want to talk about the same things. [We have] the same waves with where music is right now, where things should be."

And that means socially conscious. Bilal has tapped into today's most urgent movements like #BlackLivesMatter. And he sounds damn good doing it, with a voice as dexterous and unique as Prince's. Bilal's upcoming album will drop June 30.

North Carolina MC Rapsody holds down one of only two guest rap verses on Butterfly. And she makes "Complexion (A Zulu Love)" and its close read of colorism the achievement it is.

"I took it back to when I was younger, I was the darkest skinned person in my family. I remember how I used to feel — like I wasn't pretty enough, or I wasn't good enough," Rapsody told MTV talking about her approach. "I wanted to touch on how we look on each other. Good hair, light skin, you must be smart; if you're black, you're dark skinned, you're ugly. That really happens."

Since the song was released she's gained many new fans and has been inundated with requests to interview, according to BET. It's driven renewed attention to her Beauty and The Beast EP, which she re-released with bonus cuts in April. And her sophomore album is coming later this year.

Her latest single, "Hard to Choose," details her anxieties rapping as a woman in a male-dominated game.

"We don't label men 'male rappers,'" Rapsody told BET about the label femcee. "Labels like this only cause divide and instantly put females in a box. A box that says women in hip hop are different than men in skill and talent, and that just isn't true." Her music proves it.