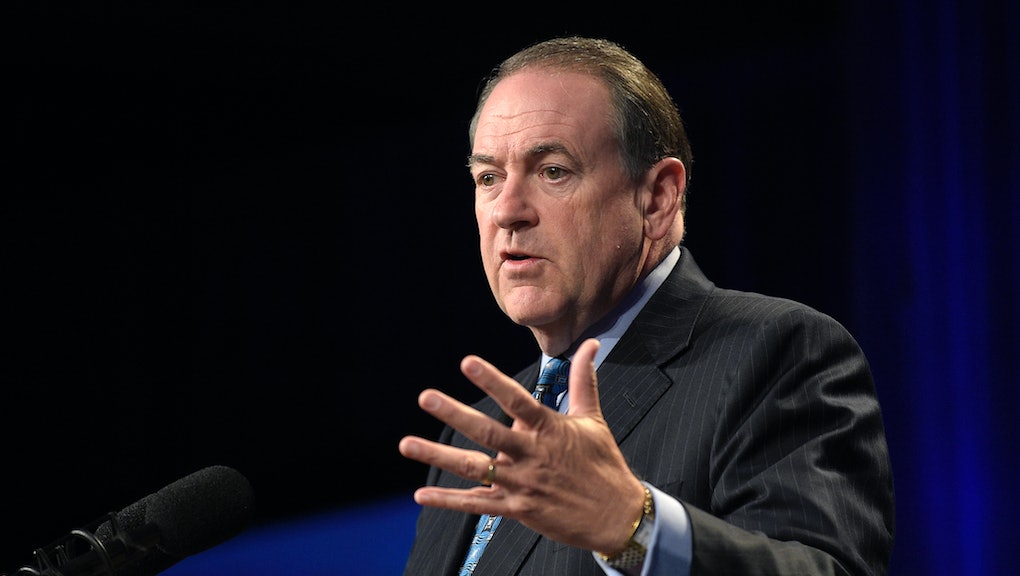 Former Arkansas governor and presidential candidate Mike Huckabee is doubling down on a transphobic joke he told to an audience of Christian conservatives in February.

On Friday, Huckabee spoke to Iowa talk radio host Steve Deace and defended that joke implying that boys would fake being transgender in order to use the women's showers.

"I'm kind of glad it's posted because people, if they watch the whole clip, what they're going to see is that I'm giving a commonsense answer to the insanity that's going on out there," Huckabee told Deace, adding:

Huckabee's unwelcoming stance on trans issues in the politically crucial state of Iowa was an easy call for a Republican candidate campaigning for the state's conservative caucus-goers. Fellow candidate Rick Santorum had conservatives up in arms in May, when he announced his support for Jenner's decision, telling reporters in South Carolina, "if [Jenner] says he's a woman, then he's a woman." The former senator quickly clarified his comments on his Facebook page.

And while Lindsey Graham, yet another candidate, took the bold step of welcoming Jenner into the party, former longtime Republican strategist Ed Rollins told the Washington Post that candidates should, "Stay the hell away from it," and directly singled out Huckabee's joke as a misfire.

Before he realized the danger he put himself in, Santorum may have said it best, and in doing so, showed a glimmer of the "live and let live" approach the Republican Party once exemplified. "My responsibility as a human being is to love and accept everybody. Not to criticize people for who they are," he said in his original comments. Rather than belittling people like Jenner, religious conservatives like Huckabee should take a serving of their own medicine from Mathew 7:1.

"Judge not, that ye be not judged."