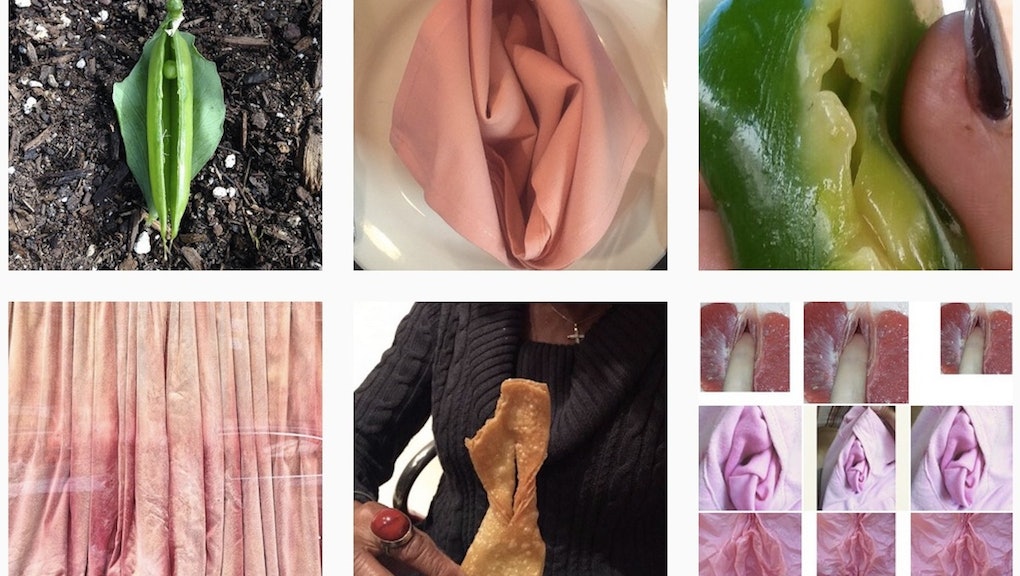 When an artist tells people to "look at this pussy," they're bound to listen.

Eva Sealove and Chelsea Jones, both 25, are doing just that. Jones and Sealove are the activists behind "Look at This Pussy," an Instagram-based project to collect photos of everyday objects that just happen to resemble vaginas.

The point of this odd collection that boasts more than 90 safe-for-work vulvas made from towels, T-shirts, fruit and more: bringing the message of anti-shame about vaginas to one of the most popular visual mediums of the day.

"Normalization is absolutely a focus," Jones told Mic. "The female body is fetishized beyond any kind of reality. By choosing yonic objects, it's a way to seize representation, take back what's ours."

A no-shame space for women: The idea seems to be catching on. LATP has more than 5,300 followers, and Sealove and Jones are receiving around 10 follower submissions a day as well as curating their own photos. The project is community-based, built around the fact that young people, especially women, are so often sucked into a cycle of negative body talk and poor self-esteem after scrolling through Instagram. The "pussy" shots hope to disrupt this.

"I think we're on our phones more than anything else," Jones told Mic via email. By unapologetically celebrating "vaginas" right in people's newsfeeds, LATP aims to be an empowering beacon for followers who have vaginas — and make those who don't think twice.

"There's a chasm between representation of 'pussy' and what's it's like to live with one. With LATP we're addressing this discrepancy or misconception, by conforming to it," Sealove told Mic.

That means helping those with vaginas feel less ashamed or sheepish about their own parts. The upbeat and inspirational photo captions bring the positive message home, from "Make the best of it [your pussy], but realize there is no such thing as 'the best'" to "Do u remember the first day you realized u had a pussy?"

"We are militantly anti-shame, and very much about acceptance of one's body," said Jones.

Getting comfortable with the word: LATP also aims to normalize the word and imagery for both men and women. "There are plenty of misconceived notions about [the vagina]," Sealove said. Those misconceptions are fed by our lack of language around female bodies and pleasure.

As commonly as we hear "getting pussy" in our dating and sex lives, as a culture we're barely confronted with real anatomy or discussions of what it's like to have one. A Medium analysis of mainstream media's usage of the words "penis" and "vagina" showed that penis coverage far outweighs vagina coverage at major outlets like the New Yorker, Time and BBC News.

That lack of representation results in a society that, too afraid to confront real "pussies," perpetuates false expectations of how they should look.

LATP is one of several art projects to take on this lack of representation. In 2014, British artist Jamie McCartney created a wall sculpture of real vaginas taken from plaster casts of 400 volunteers. In 2013, artist Jennifer Lauren Martin created vaginal emojis, and in 2014 the Japanese artist Rokude Nashiko was arrested for building a canoe sculpture of her vagina. Sophia Wallace's Cliteracy project features sculptures and posters of female anatomy to encourage conversations about the right to pleasure.

Pussies with personality: Look at This Pussy is about destigmatizing and normalizing female genitals, all while exposing the flawed ways we currently talk about anatomy.

"We use careful language to addresses the indirect way that our culture deals with sex, sometimes by being blunt, and sometimes by engaging with that type of euphemistic discourse," Sealove added.

Luckily, that euphemistic approach helps LATP get around the notoriously strict Instagram policies that have blocked other body activism like #FreetheNipple. But the language is also meant to change the tone of the conversation.

"By ascribing a personality to a pussy, we're beating the 'get pussy' mantra at its own game," said Jones.

And they're doing so in between our filtered selfies and plates of food. If you can't beat 'em, join 'em — and make them look.