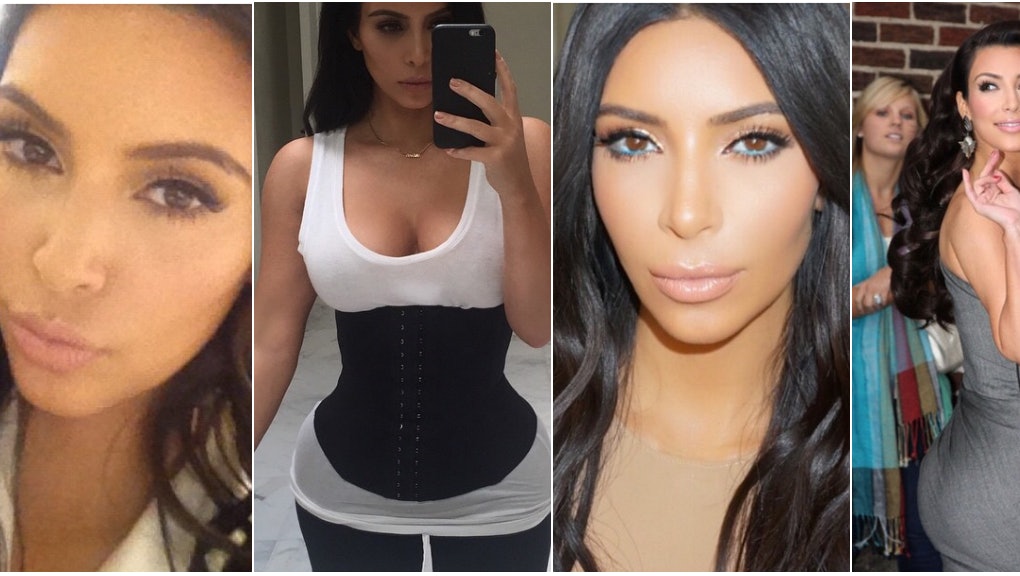 The Science of Why We Can't Stop Looking at Kim Kardashian

Kim Kardashian might seem like one of the most detested celebrities on Earth, but the numbers tell a different story. People love to hate her, but even more, they love to gawk at her. They follow her everywhere, drinking in her virtual image every day.

But if her fashion isn't exceptional and her personality isn't appealing, what's keeping us staring?

The answer may lie in all those selfies.

The power of images to wash over us: Are our brains wired to be fixated on Kim? Certain celebrities, neuroscientists have found, can spark especially strong reactions in our brains. But we're really so fixed on Kim, sociologists told Mic, because of the plethora of images she shares — the selfies, portraits and snapshots.

Text triggers a different kind of engagement from readers. We pen essays and dash off tweets dissing the Kardashian name but don't engage quite so critically with the photos themselves, said Patricia Leavy, a sociologist and women's studies expert.

"Those kinds of images are very powerful because we don't engage in an analytical process or a debate... we just internalize them," Leavy said. "[Celebrities are] getting all these images out there that give them this allure and this status just on the basis of exposure."

And when it comes to that uncritical exposure, both the scale and type matter immensely.

When stars feel just like friends: That the photos of Kim come primarily from Kim herself makes a huge difference, said Melanie Kohnen, a professor of media, culture and communication at New York University.

Because most of what we see comes directly from her, Kohnen told Mic, "we kind of believe that this is the more truthful sort of access to her as a person and to her life than if it was in a magazine."

Kim's selfies bounce endlessly between what seems like a fantasy world and what looks like her natural, intimate life (see: all those bathroom selfies). As Slate's Laura Bennett wrote in a review of Kim's book Selfie:

"[Kim] manages to project a whole mess of seemingly incompatible traits: wholesome (family values) and scandalous (sex tapes), self-aware (jokes about her own materialism) and oblivious (carrying a Hermès bag painted by her 1-year-old child), highbrow (Vogue covers) and gauche (photo shoots of her butt)."

The fleeting, relatable encounters blur the line between Kim's celebrity portraits and her "real life" snapshots, creating a very human connection between herself and the viewers, Kohnen said. The effect is a perceived level of intimacy and familiarity.

Kim's ubiquity also contributes to that familiarity. She's lived her life in front of the cameras, offering details about everything from her her vagina to her struggle to conceive, topics that might seem taboo in the most intimate of friendship circles. She's all around us, making her audience (us) feel like they're (we're) a part of her life.

"She's been 100% exposed," Rebecca Plante, a sociology professor specializing in gender and sexuality at Ithaca College, told Mic. "She came out with nothing to hide, so she seems real and approachable."

What's more? We always know what we're going to see when we click. Her wavy brown hair, her pouty lips, her perfectly bronzed makeup, the tight outfits — at this point, the manicured consistency of Kim's look makes her about as familiar as our own family members.

The allure of the familiar: According to the "exposure effect," we often prefer people or things simply because they're more known to us. "Repeated exposure to a stimulus can make people like this stimulus better," wrote Swiss psychologists Jochim Hansen and Michaela Wänke in their 2009 paper, "Liking What's Familiar."

That applies to celebrities, too. "It's not surprising that gorgeous people wind up famous. What's less obvious is that famous people often wind up gorgeous," Psychology Today editor Carlin Flora wrote. "The more we see a certain face, the more our brain likes it, whether or not it's actually beautiful."

And we see the same Kim face over and over and over again. The contoured cheekbones, the wavy brown hair, the pouty lips — you know what you're going to get when you click onto Kim's Instagram. She's as recognizable as your best friend, but even more physically consistent.

An icon in the making: Thanks to Kim's virality, we're witnessing, in real time, the creation of an icon — someone who transcends from living, breathing person into a tangible symbol, able to be summed up in a photo and carried between generations.

Kim knows this, and she leans into her growing idol status, Leavy told Mic, by channeling other iconic personas. Take, for example, her controversial champagne photo shoot in Paper, or her recent Vogue Brasil cover that was inspired by Marilyn Monroe, or even her own selfies channeling Elizabeth Taylor.

The more photos Kim floods us with, the more we stare, and the more our brains rack up a rolodex of Kim visuals and log them in our memory. Like Marilyn or Elizabeth, Kim's image, from her hair to her clothing to her facial expressions, is quickly becoming a cultural fixture from which we don't want to turn away.