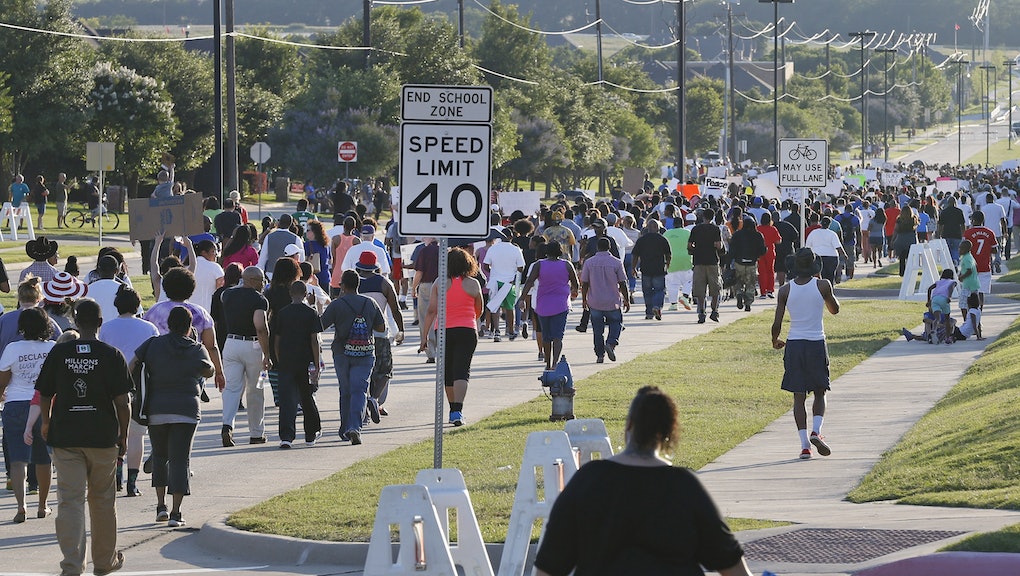 Who doesn't want to move to one of the "best places to live" in America? The homes are affordable, jobs are plentiful, schools are good and diversity is ... well, it's a work in progress, but look at all the other great stuff they have!

Each year, when Money magazine ranks its 50 best small cities in the U.S., it tantalizes readers with an idyllic snapshot of the country we all wish we could call home — a place where our families feel safe and our dollar goes a long way, making the prospect of building wealth in such inequitable times no longer seem far-fetched.

And maybe, just maybe it's only a coincidence these cities boast a more-than-noticeable plentitude of whiteness. Money's top-ranked town in 2014 was McKinney, Texas, a place where the facade of "hometown" welcome and "country charm" disintegrated when a white police officer — who has since resigned — was filmed Friday pulling his gun on a group of unarmed black children and dragging a 15-year-old bikini-clad teenager to the ground by her hair and sitting on her back.

But then again, maybe it's not.

A few items worth noting: The fruits of America's most desirable towns and small cities being harvested unequally according to race is not surprising. In all but a few places on Money's list, the demographic breakdown of the top 25 places to live fall between 70% to 92% white — and that's with "diversity" being one of the metrics they used to determine the coveted "best" label.

These cities also boast economic prospects trending upward: Projected job growth is a key consideration in the rankings, as are income growth and purchasing power. In other words, the boom towns of today stand to be among the wealth centers of tomorrow. Which makes their whiteness significant, especially when it reveals itself — as it has in McKinney — to house similar racial tensions as those that sparked protests in Ferguson, Missouri; Baltimore; Cleveland and other cities over the past year.

In other words, the boom towns of today stand to be among the wealth centers of tomorrow.

And even despite the Jim Crow overtones of a black-white dispute over who's "allowed" to use the community swimming pool, this economic pattern is a product of its time. As the Great Recession of 2008 ostensibly 180'ed into a nationwide resurgence, black people have been left behind, with wealth gaps between blacks and whites growing even wider than their staggering pre-recession figures.

At the same time, poverty has grown increasingly concentrated in the suburbs. A Brookings Institute study from July 2014 found the number of suburban poor people living in distressed neighborhoods grew 139% between 2000 and the period from 2008-2012, a much faster rate than in cities.

And while black and white people have both been impacted by this shift — in fact, some of the fastest-growing poverty rates are occurring in majority-white neighborhoods — one fact is especially stark: Wealth among whites has both ebbed and flowed since the recession. Black people have only gotten poorer.

So the questions becomes, as long as the "best places to live" in America also remain definitively white, what hope do we have of dethroning this racist status quo, and preventing another McKinney?